Dilip Chitre: With Tukaram, In Heaven 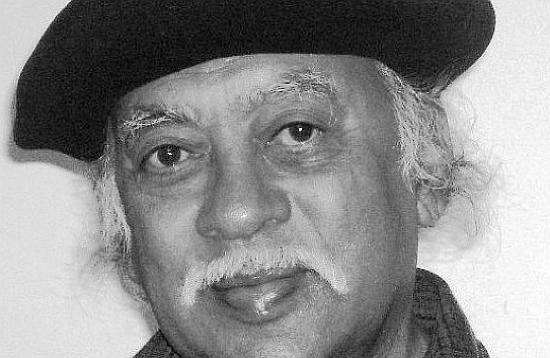 An year or so after Arun Kolatkar's death, Dilip Chitre wrote: "If you crave for a discussion of your life’s work by your contemporaries, try dying:

When an author dies, the eulogies and the paeans that pour seemingly out of nowhere make one wonder why even a small fraction of all that recognition was not forthcoming when he/she was precariously and mortally present among those posthumous admirers."

Dilip Chitre, 71, died of cancer at his Yerawada residence in Pune early this morning.

Some of his last writings are scattered on facebook, his blog, website and the site on his all-consuming passion, Tukaram.

A few excerpts from some of his on-line poems:

I bequeath to you
My fossil and my dossier .
And I join the saints'
Immortal choir.
Tukaram in heaven,
Chitre in hell,
Sing the same song
Centuries apart .
...
Come back pock-marked poets ,
Join Tukaram and Chitre ,
For the song of heaven
Is one helluva chant .
Ask and you shall be refused ;
But do not leave
Your voice unused .
It's all you' ve got .
Remember, our best
Poems were always
As bald as facts,
As bare as hills .
Because our spirit
Has aspects of stone ,
And because our stones
Are lasting mirrors .

--from Tukaram in heaven , Chitre in hell

O do not ever go there-you!
Nobody who goes in ever comes back.

Only once did Tuka go to Pandhari:
He hasn’t been born ever since.

From one of my favourite poems of his: Father Returning Home

... He will now go to sleep
Listening to the static on the radio, dreaming
Of his ancestors and grandchildren, thinking
Of nomads entering a subcontinent through a narrow pass.

And from those that he put up on his website:

Will the poem end when
All His light is spent
And to a standstill, to a standstill come
All heartbeats and all drums
The cosmic drone
Buzzes back into itself
Looking for its beginning

It feels
So Easy
To be
One
In a billion.
That’s just statistic
For you
And for me
Poetry

Namdev Dhasal in the DNA:

See the difference between Nobel laureate VS Naipaul and Dilip. Naipaul was to come to meet me at Falkland Road where I lived, in Mumbai's red-light area. He was told something by some people and when he saw the sex workers holding aartis to welcome him, he misunderstood and fled. Once Dilip was with me in the area when an African youth living there came with swords to fight in our locality. I held one sword and Dilip held the other, pinning the youth down. If he was disconnected from real society, he was right there among real people fighting on the streets.

I feel sad that in his last days, when he suffered in immense pain, the people who could have helped him did not. I had tried to approach chief minister Ashok Chavan but had to deal with his secretary and a few others in his office. They wanted me to write an application! By the time they give a date, the person would be dead, and that is exactly what happened. They go and distribute money to all sorts, but they couldn't help him with medicines and other facilities. The Sahitya Akademi had said it would.


Pratik Kanjilal in the Hindustan Times:

Curiously, there are intimations of mortality even in Dilip’s earliest poems from 1964:

“I am asked:
‘And what is the colour of orange juice?’
It is grey. All is black and white, and falls within
The spectrum. Everything is a shade from the black rainbow.
I wake up in the morning of my mortality.”

Or consider this fragment from Homage to Pataliputra:

“Come pock-marked poets,
Join Tukaram and Chitre,
For the song of heaven
Is one helluva chant.”

Dilip is gone but the fuse he lit is still burning, a brand lighting the way for future generations of poetic suicide bombers.

The same intimations of mortality are also recounted by Adil Jussawala, a close friend of Dilip Chitre's to Eunice de Souza, writing in the Mumbai Mirror:

“He sometimes saw himself as a minority of one, Adil says. He then quoted a statement Chitre had made at a literary conference in Kalina in 1995. “We are a country of minorities,” Dilip said, “minorities who undermine minorities. Everyone is a minority of one.” He sometimes referred to himself jokingly as an honorary Parsee, to indicate his empathy with minorities. He was anti-orthodox, anti-caste. He championed Namdeo Dhasal, the Dalit poet so many people found offensive.

.... For all his friends and admirers, lines from his poem “Ambulance Ride” about the death of a friend will resonate with new meaning:

“I remember the ride
My lonely half of it
My desperate half
My quiet half
My empty half of it.”

Jussawala also points to Chitre's At my age, and of my age in the Hindu, where he wrote:

My output tells a story by itself. My collected poems in Marathi from 1954 to the present day occupy nearly 1000 pages. My English poetry is about 50 per cent of that volume; and my translation of poetry would fill another 700 pages. This is embarrassingly large; but since poetry is what I principally do in life, I can hardly apologise.