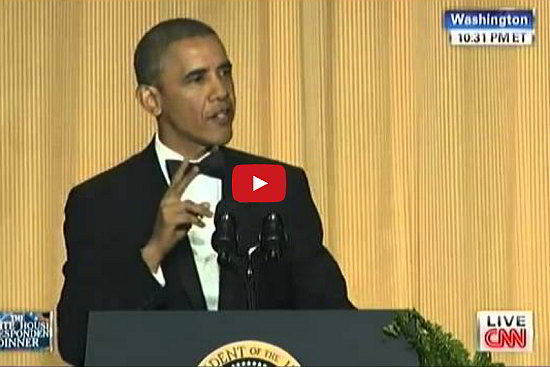 US President Barack Obama was in fine form at the annual White House Correspondents' Association dinner, packed with more than 2,000 guests in the ballroom of the Washington Hilton to mark the association's 100th year.

The annual dinner has a tradition of the US president mocking others and himself as celebrities mingle with journalists and politicians.

"I'm a little jet-lagged from my trip to Malaysia. The lengths we have to go to to get CNN coverage these days," he began with a crack at the CNN's extensive coverage of the search for the missing Malaysia Airlines plane.

He made fun of recent talk about Putin's bare chest and a comment from a conservative commentator last year about Putin being headed for a Nobel peace prize.

“To be fair, they give those to just about anybody these days,” Obama, who received the prize in 2009, dead panned.

"At one point, things got so bad the 47 percent called Mitt Romney to apologize," he said, referring to 2012 presidential campaign scandal in which the Republican candidate was secretly taped saying that 47 percent of Americans have become reliant on government handouts.

Obama also joked about opposition claims that he had been born overseas rather than in the United States. It will be a lot harder for Republicans to prove, he said, that Hillary Rodham Clinton was born in Kenya.

The US president highlighted some of the low points of his administration's last year, dwelling on the disastrous rollout of the website for his landmark health insurance reform legislation. "Of course we rolled out HealthCare.gov. That could have gone better," he deadpanned.

Obama also took a swipe at Republicans for blocking his bid to raise the minimum wage. "If you want to get paid for not working you should run for Congress just like everyone else," he said.

In a self-deprecating crack at his own low popularity ratings, the president referred to his fellow Democrats not wanting to campaign with him for November congressional elections in a wistful joke involving one of his daughters: "I did notice the other day that Sasha needed a speaker for career day and she invited Bill Clinton."