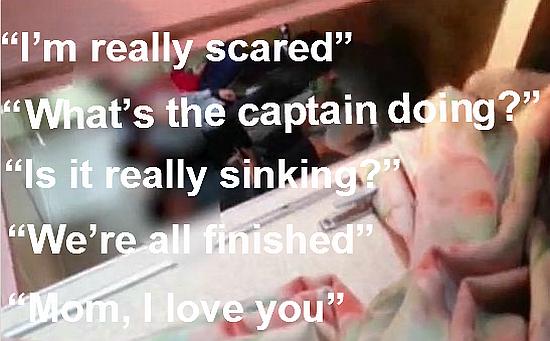 Shocking, heart-rending cell phone video taken by a student on board sinking South Korean ferry that records last words and pictures of teenage passengers has emerged.

More than 300 people are dead or missing in the ferry disaster, and about 220 bodies, mostly teenaged students, from inside the submerged vessel, have been recovered.

Most of the victims on the ferry were students from a high school in Ansan, south of Seoul, on their way to the tourist island of Jeju for a school trip.

The video is an excerpt from the footage discovered on the cell phone of 17-year-old student Park Su-hyeon after rescuers recovered his body from the ferry that sank off the coast of South Korea on April 16.

The boy's father, Park Jong-dae, provided it to media organizations, with the request that the faces be blurred as a mark of respect to grieving families.

The shaky, heartbreaking video records nervous laughter, jokes about the Titanic and talk of selfies and Facebook posts from the doomed high school students huddled below deck.

But as the gravity of the situation became clear, and fear began rising, one of the students asked, “Am I really going to die?”

The 17 minutes video begins at 8:52 a.m. and goes on till 9:09 a.m. — the beginning shows only one student wearing a life jacket and by the end almost everyone seems to have managed to put the jackets on.

The video also records messages blared from the ferry’s loudspeakers: “Don’t move away from your places and brace for any possible accidents.”

This was followed by other announcements telling passengers to again stay where they are.

The last message at 9:08 again reiterates: “We’re again announcing: For passengers who can wear life vests, please wear them now. Never move away from your places.”

Capt. Lee Joon-seok took at least half an hour to order evacuation, and it remains unclear whether the decision to evacuate was ever relayed to passengers who had earlier been asked to stay where they were.

The captain was seen leaping into a rescue boat while many passengers were still in the sinking ship.

There are poignant moments in the video as they talk about “final commemorative pictures” and “defying gravity” by trying to walk on the walls.

Among other snatches of conversation:

“Is it really sinking?”

“I’m getting out of here”

“We have to survive now.”

“We’re all finished. I have to leave some farewell words before I die”