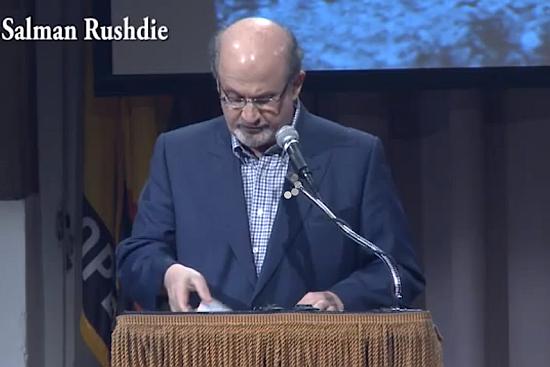 Let me talk a bit about my country of origin, about India.

There is a general election under way in India right now.

Because of the immense size of the country, it takes six weeks for everyone to vote.

The election is largely fair, largely free. Voting is peaceful, incidents are few, and the results will be a trustworthy expression of this gigantic electorate.

On this electoral process rests India's claim to be the world's largest democracy. A proud claim, for it is harder for a poor country to be a free country.

And the long civil uncertainties and frequent unfreedoms of the citizens of all India's neighbours—the north, east, west and south—make the Indian boast all the prouder.

This, we can all agree, is good.

But a democratic society is not simply one in which such a ballot takes place every four or five years.

Democracy is more than mere majoritarianism.

In a truly free democratic society, all citizens must feel free all the time, whether they end up on the winning or losing side in an election—free to express themselves as they choose, free to worship or not worship as they please, free from danger and fear.

If freedom of expression is under attack, if religious freedom is threatened, and if substantial parts of society live in physical fear for their safety, then such a society cannot be said to be a true democracy.

In contemporary India all these problems exist and they are getting worse.

The attack on literary, scholarly and artistic freedom has gathered force ever since the banning of my novel, The Satanic Verses in 1988.

Rohinton Mistry's acclaimed novel Such a Long Journey was attacked recently by members of the Hindu extremist party the Shiv Sena in Bombay and Bombay University caved in and removed the book from the syllabus.

A.K. Ramanujan's classic essay, The 300 Ramayanas, for decades, the foundational text of Ramayan studies in Delhi University, was similarly attacked and similarly the authorities cravenly succumbed and removed it from the syllabus.

Not only was James Laine's study of the Maratha warrior king Shivaji, an icon of the Shiv Sena Party, attacked and banned, but the great library of ancient texts in Poona, where Laine had done some of his research was attacked and many ancient manuscripts destroyed.

And most recently, the same fanatical Hindu—a person called Batra— who attacked Ramanujan's essay, brought an action against Wendy Doniger's important scholarly work, The Hindus, accusing her ludicrously and ungrammatically, of being a "woman hungry of sex" and instead of being laughed out of court, he succeeded in scaring the mighty Penguin Books of withdrawing the work.

The grand old man of Indian painting, Maqbool Fida Husain, was driven out of India because of threats from Hindu goon squads who disliked his nude portraits of Hindu goddess Saraswati in spite the long sculptural and artistic tradition from the most ancient times of depicting Indian goddesses heavily adorned in jewellery but very scantily clad. The wardrobe of the goddess Saraswati wouldn't take up much room.

Episodes of this sort are multiplying it seems by the month, by the week, by the day almost, and the authorities have failed lamentably in their duty to protect free speech rights.

In fact, politicians and police officials alike have repeatedly blamed the victims for being the trouble makers.

The climate of fear that has consequently been created is such that, as some of the examples I have given show, hooligans and censors' work is now done for them by the collapse of those who ought to be free speech's defenders.

Penguin Books, whose merger with Random House, has created the world's largest and most powerful publisher, and who were prepared to defend my work back in 1988, this time gave in to Doniger's critics without so much as a fight.

This already lamentable state of affairs looks likely to become worse if, as seems likely, as seems probable, the election results bring to power the Hindu nationalist BJP so that the highly divisive figure of Mr Narendra Modi, accused of being responsible for an ant-Muslim pogrom in 2002 in the state of Gujarat, whose chief minister he was then and still is, a hardliner's hardliner, becomes India's next Prime Minister.

Films dealing with the pogrom have been banned in Gujarat ever since the attacks. Already, the threats to free expression have begun to spread beyond the state of Gujarat.

Siddharth Varadarajan, the editor of the distinguished English language daily, the Hindu, was forced to resign recently because the paper's owner's felt he wasn't pro-Modi enough. Soon afterwards, the caretaker of his apartment was beaten up in a Delhi street, by thugs who told him, 'Tell your boss to watch what he says on Television.'

Sagarika Ghose, a leading anchor of CNN's Indian affiliate, IBN, was ordered by her bosses to stop posting tweets critical of Mr Modi. In response, she tweeted what many journalists are thinking: 'There is an evil out there, an evil which is stamping out all free speech and silencing independent journalists: journalists unite!'

There is an evil out there, an evil which is stamping out all free speech and silencing independent journalists: journalists unite!

Nor are the threats limited to free expression. Modi's campaign manager Amit Shah delivered a speech in early April in the northern town of Muzaffarnagar, the site of sectarian strife last year. He described the elections as an opportunity to seek revenge against the Muslim minorities.

Giriraj Singh, a senior leader of the BJP, said in an election rally in the northern state of Bihar, that those opposing Mr Modi would have no place in India—they will only find a place in Pakistan, he shouted.

Praveen Togadia, one of the most senior of what I have come to think of as Modi's Toadies, told his supporters to prevent Muslims from buying property in Hindu majority neighbourhoods in Gujarat.

The writing is on the wall.

A couple of weeks ago, the sculptor Anish Kapoor and I, along with several other Indian artists, academics and intellectuals, signed an open letter, worrying about Mr Modi's rise to power.

Since then, the attack on us in Indian social media has been relentless and, paradoxically, has validated our fears.

We worried about the arrival of a bullying, intolerant new regime and here are its early outriders: menacing, nasty, bile-spewing, vengeful, substituting ad-hominem attacks for any real debate. There will not be less of this after a Modi victory.

Mr Modi's supporters hark back to the ballot box. He will win, they say, because he is popular. And they are right.

A disturbingly high percentage of the Indian electorate wants a strong man leader, is willing to turn a blind eye to his past misdeeds, even if those include genocide, believes that dissenting intellectuals should be put in their place, critical journalists should be muzzled, and artists should behave themselves.

This willingness to bet the house on Modi's alleged economic genius, on which many commentators have doubts, and to risk everything that's beautiful about a free society, may indeed provide the wave which sweeps Mr Modi to victory.

It would be easy to say: then India will get the government it deserves. For all those who value what is being lost, all those who want a country free of fear, an open society not a stifled one, all those Indians will get an India they don't deserve.

Those who value the India for which Rabindranath Tagore yearned in his great poem, 'My country awake!' will get an India that would have horrified the poet.

Where the mind is without fear and the head held high,
where knowledge is free,

Where the mind is led forward by thee
Into ever-widening thought and action
Into that heaven of freedom, my Father, let my country awake.

India is in danger of betraying the legacy of its founding fathers and greatest artists like Rabindranath Tagore.