Watching films in theatres in 1980s Kashmir left an impact on the audience few could anticipate. 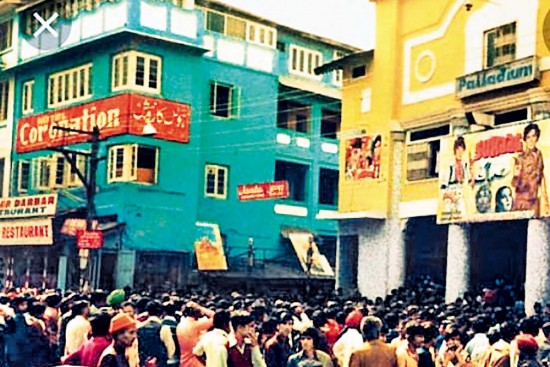 “I would buy half-tickets to wat­ch a film till the interval. The rest of the story, I’d make up in my mind. Surprisingly, I rarely got the endings wrong,” says Bashir Ahmad Dada. Those days, people who couldn’t afford to buy a full ticket were allowed to buy half a ticket, recalls the well-known Kashmiri poet and actor.

Dada, who hails from south Kash­mir’s Anantnag district, says in the 1970s and 1980s, every section of society loved to watch Bollywood and Hol­ly­wood movies, and thronged theatres in Srinagar and elsewhere in the Val­ley. “I’ve seen police resort to lathicharge outside Nishat Talkies in Ana­n­t­nag to maintain order during sale of tickets before a screening.”

In 1985, when Lion of the Desert was screened at Srinagar’s Regal Cinema, Dada joined the serpentine queues to watch the film about Libya’s anti-colonial resistance icon Omar Mukhtar (1862-1931), who spent the last 20 years of his life fighting Ita­lian occupation of his country. Giv­en their acute sense of history and polit­ics, Kashmi­ris immediately started comparing Mukhtar with their own legendary leader Sheikh Mohammad Abdullah.

Sheikh’s 1975 accord with PM Indira Gandhi, after 22 years of incarceration, was still fresh in their memory. The movie and Mukhtar’s life story had a profound impact on the Kashmiri’s understanding of sacrifice and compromise. Dada recalls witnessing aud­i­e­nces getting emotional during the scene in which a small boy in the crowd picks up the glasses belonging to the elderly guerrilla, after he is han­ged at the end of the film. “It had a chi­lling impact on viewers, and made them reevaluate Sheikh’s choices, and left them with a bitter sense of betra­yal. Everyone at the theatre seemed to rise up to pick up Mukhtar’s glasses,” he says.

Immediately, people could be seen tearing down Sheikh’s posters plaste­red across Srinagar. Since 1931, Sheikh had been the undisputed mass leader in the Valley, but after Lion of the Desert, that image collapsed. Status quo transfor­m­ed into status quaestionis, never to return to status quo ante.

Historian Khalid Bashir recalls how Kashmir’s first film theatre, built by Bhai Anant Singh Gauri at Lal Chowk (named after Moscow’s Red Squ­are) in 1932, reflects Kashmir’s history. Origin­ally named Kashmir Talk­ies, it was later changed to Palladium, perh­a­ps after the famous theatre at St. Pet­ersberg. In the 1940s, leftist ideology had a deep imp­a­ct on Kashmir, at least in symbolism and egalitarian aspirations.

Regal was the next theatre to open in the Valley, also at Lal Chowk. Built by a Punjabi-speaking family, their progeny Rohit Bal is a leading fashion designer. It downed its shutters after 1990, and is to be replaced by a shopping mall. In 1955, recalls a businessman, when flo­ods hit Srinagar and Regal got submer­ged, patrons would place wooden logs on the steps to reach the tiered gallery.

Bashir recalls that Palladium is at the centre of the history of film viewing in Kashmir. He says it was the oldest movie hall in north India and would screen Hollywood movies before they were released in Delhi. Many old-timers say the 1980s of Srinagar was far ahead of any Indian metro. The Raj had left a deep influence on Srinagar. The area around the Bund—a footbri­dge on Residency Road—was its most chic, fashionable place. Most housebo­ats were open only to foreigners, as Ind­­ians couldn’t afford them. Shops at Lambert Lane were where you would go to get noticed.

Theatres running Hollywood films would also translate their titles into vernacular, although the transition was often clumsy. The Three Muskete­ers, for instance, became Teen Haram­zade in Urdu.

Across Srinagar, dusty old photo studios still prominently display frames with Bollywood actors to draw tourists. Senior photojournalist Nisar Ahm­ad says till the 1980s, photograp­hers never missed an opportunity to have their pictures taken with Bolly­wood stars during the innumerable shoots in the Valley. “I myself had sna­ps taken with Rishi Kapoor,” he reminisces.

ALSO READ: The Quest For Our Glorious Past Is How The Right-Wing Woos The People

“Dilip Kumar was the craze. I have seen people standing up in att­e­ntion when Dilip Kumar first appea­red on scr­een. In those days, I’d bunk clas­ses and even evening prayers to go to the movies,” says Abdul Hamid, a leading Valley businessman. He recalls people who couldn’t afford a ticket or get hold of one, would wait at the theatre gates to hear the story from those coming out after the show—and then let their imagination take over. “Black mar­­keters were the kings. You could identify them by their swagger,” he adds.

When Khana-e-Khuda was released in 1968, many ‘ticket blackers’ would insist upon buyers to remove their shoes before they entered the hall. The audience, too, obliged. Years later, in the 1980s, when Bible was screened at Shiraz, Muslim clerics insisted they should watch it first and be allowed to clear it for public viewing. The administration obliged. Surprisingly, the film got cleared without any cuts.

ALSO READ: Congress-Left Too Harks Back To The Past In Search For A Better Future

In the turbulent autumn of 1947, Pal­ladium became the headquarters of the Kashmiri nationalist party led by She­ikh Abdullah. “It was a radical, secular movement, with closer links to India’s Congress party than with Pakistan’s Muslim League,” writes author And­rew Whitehead. When in November 1948, PM Jawaharlal Nehru visited Srinagar and addressed a huge crowd alongside Sheikh Abdullah, Palladium provided the backdrop. It was also here that Nehru promised plebiscite to the people of Jammu and Kashmir, and described Sheikh as his alter ego, reading out a Persian couplet:

(I have become you and you me, I am the body you its soul;
No one can say hereafter, that you are someone and I someone else)

The Nehru-Sheikh bonhomie ended six years later when, on August 9, 1953, Sheikh was arrested from Gulmarg in the Kashmir conspiracy case on the direction of Nehru.

ALSO READ: Our Past In The Present

Till 1964, all three movie theaters in Kashmir were located in Srinagar’s Lal Chowk. Then Shiraz came up at Khan­yar, in the heart of the old city. Bashir says it opened with the Raj Kapoor-Vijayanthimala-Rajendra Kumar starrer Sangam, and drew packed crowds.

Former bureaucrat-turned-politician Naeem Akhtar says he was the last exc­ise officer in 1989 who collected entertainment tax, before theatres downed shutters with the onset of the insurge­n­cy in 1990. “The system collapsed in 1990, and with it, theatres wound up.”

In September 1989, a rumour spread in the old city that people are disappe­aring. It happened right after the killing of National Conference party wor­ker M. Yousuf Halwai, and the sho­otout outside the residence of DIG Pol­ice A.M. Wattali, in which, militant Ajaz Ahmed Dar was killed. Akhtar says administration and police were clueless about the rumblings in the Valley, and presumed these incidents as usual law-and-order problems. The­re was severe pressure on the police to make arrests. “The police parked two buses outside Shiraz cinema, caught hold of movie-goers emerging from the theatre and asked them to board the buses, with the promise they would be dropped at their destinations. Instead, they were taken to Khanyar police station and presented as suspects,” he adds.

The ruins of Palladium are an appropriate motif for today’s times. Like oth­er theatres in Srinagar—Neelam, Firdous, Shiraz—Palladium is occupied by the CRPF, menacing concertina wires marking its boundaries. How­ever, the CRPF has painted its ‘bunker’ red, perhaps a nod to Lal Chowk.

By Naseer Ganai in Srinagar