The Household On Bishop Lefroy Road 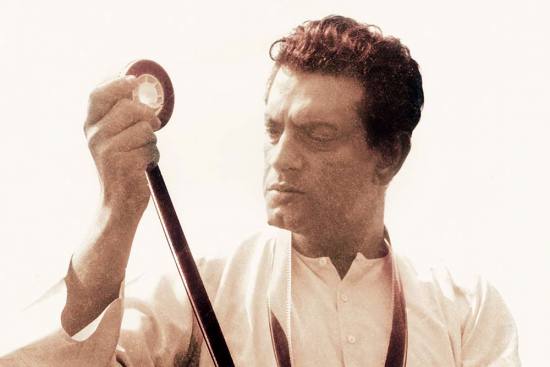 Part of the magic of Satyajit Ray’s productions was in the sense of an extended family that cast and crew were drawn into, often necessitated by the microscopic budgets they worked within. It led to lifelong friendships and creative collaborations, with the possibil­ity of learning on the job, and often discovering hidden talents. The best known among the many hangers-on is undoubtedly Kamu Mukherjee, who joined Ray’s team as a gaffer, impressed everyone on set with his myriad talents at entertaining with tricks and treats, and ended up playing some of the most memorable comic and villainous roles in Ray’s films—from the advertising professional trying to hustle his wife in Nayak, to the “globe-trotting” kidnapper Mandar Bose in Sonar Kella and the drunk knife-thrower in Joy Baba Felunath. What a magical time it must have been—those Sundays at the Ray home on Bishop Lefroy Road, with actor Soumitra Chatterjee, art director Bansi Chandragupta, still photographer Nemai Ghosh and many others discussing Ray’s next project over lunch prepared by his wife Bijoya.