Muzaffarnagar, Sep 5, is the new dateline of protest. A mahapanchayat, with participants from across states, will be the start of a campaign that’s going rural in UP. 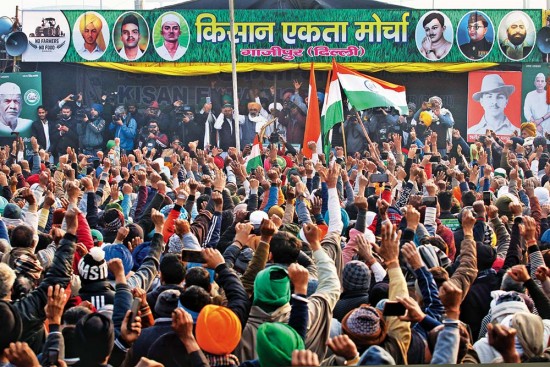 Farmer leaders from platforms like the Samyukt Kisan Morcha (SKM) plan to intensify their protests against the new farm laws and to press their demands such as making minimum support price (MSP) mandatory for all farm produce. In the aftermath of administrative and police action against protestors in Karnal, Haryana, on August 28, the protesting farmer groups have decided to mobilise in larger numbers for the proposed mahapanchayat in Muzaffarnagar, Uttar Pradesh, on September 5. Around 40,000 to 50,000 farmers from Haryana are expected at the event, besides large numbers from Uttar Pradesh, Uttarakhand, Rajasthan, Madhya Pradesh and Punjab. There will also be representation from around 500 groups that had participated in the two-day convention held at Delhi’s Singhu border to mark nine months of the ongoing protests. Farmer leaders claim they succeeded in giving the protests a national dimension as representatives from 22 states ­attended the convention.

“In a democracy, we can only raise our voice to make demands and vote for change,” says Bharatiya Kisan Union spokesperson Dharmendra Malik. “As part of our Uttar Pradesh and Uttarakhand mission, followed by the Punjab and Haryana mission, we will use the Muzaffarnagar mahapanchayat to press our demands and also call for change in the political leadership.”

The protesting groups, which have dec­ided to organise rural meetings in all ass­embly constituencies of Uttar Pradesh, say they might have to face administrative action against their efforts to spread the protests across the state. “When the farmers’ movement spreads across the villages, we expect a political impact,” says Darshan Pal, a member of the SKM coordination committee.

The police action in Haryana on August 28 left 10 people ­seriously wounded and one dead. The farmer groups have sought legal action against those responsible, besides compensation for the injured and the dead. In ­addition to appeals to vote against the ruling party, they have raised their voice against involvement of big corporates in production, storage and marketing of ­agricultural produce. Claiming that their protests are finding resonance across political lines, the ­leaders say agrarian ­issues may become the basis of Opposition unity.

The protesting groups have also given a call for a nationwide bandh on September 25. One of the grievances being highlighted is that despite the BJP’s promise of doubling farm incomes, there are many crops like basmati rice where instead of 50 per cent returns over the input costs, farmers are today getting almost 40 per cent less due to ­either low MSP or higher input costs. That’s why the protesting groups are ­demanding remunerative “MSP for all crops and all farms”.

(This appeared in the print edition as "Raising The Farm Stakes")