The Centre has reacted angrily at the new Global Hunger Index, but experts say it should plug loopholes in the food delivery system. 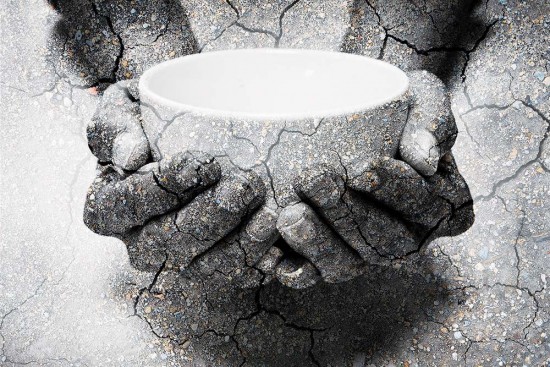 It wasn’t easy for 20-year-old Pooja Verma, who was doing two jobs before the pandemic, to run a household of seven. The domestic help moonlighted as a beautician at a parlour, while her brothers worked as daily wagers. Living in a shanty on a vacant plot in Gurgaon, she and her family were always on the precipice of hunger. But once the Covid-induced lockdowns began in March 2020, for around a month, they went half-fed. “The pandemic lockdowns killed us economically. Within a month, all savings were exhausted. By May 2020, the only food we were able to get was due to the magnanimity of landladies in whose homes I worked as a maid.”

Pooja says their Aadhaars are registered in their village address in Uttar Pradesh, so her family cou­­ldn’t avail PDS in Haryana. She explains, “Sha­nties don’t have any address. But to update the address on Aadhaar, we need documentation which we don’t have.” She rues they couldn’t avail any of the government Covid relief schemes.

Hers is just one story among millions. Venture into villages and slums, and heartbreaking stories of hunger during the lockdowns will pour out.

Hunger Games in India are not new. Sometimes, these stories reach us in the form of CSR advertorials on media, at other times as statistics of dea­ths in news reportage.

The concern for India’s food security raised its head again recently, when the Global Hunger Ind­ex (GHI) 2021 positioned India at 101 among 116 ranks, from 94 in 2020. The ranking puts India below its neighbours Sri Lank, China, Pakistan, Bangladesh and Nepal.

GHI is a peer-reviewed report published by Con­cern Worldwide and Welthungerhilfe, des­i­gned to comprehensively measure and track hunger at glo­bal, regional and national levels. It aims to trigger action to reduce hunger around the world.

Predictably, the government of India strongly objected to the ranking, saying, “It is shocking to find the Global Hunger Rep­ort 2021 has lowered India’s rank on the basis of the FAO (Food and Agr­i­culture Organisation, a UN body) estimate on the proportion of und­er­no­urished population, whi­ch is devoid of gro­und reality and facts and suffers from serious methodological issues. The publishing agencies of the Global Hunger Rep­ort, Concern World­wi­de and Welthun­gerhilfe, have not done due diligence.”

It also termed the methodology used by FAO as unscientific and alleged the assessment was a result of an opinion poll involving four questi­o­ns, conducted over telephone by Gallup, with no measurements of weight and height. The Cen­tre also says the report disregards its massive effort to ensure food security of the entire population during the pandemic, verifiable data on which are available. Even the representati­veness of the poll was questioned.

A senior official, on condition of anonymity, said, “The government’s reaction is justified. Several attempts made to fight hunger were blatantly ignored while calculating the ranks. Also, the four parameters that are used are faulty.”

Notably, the FAO report ‘The State of Food Sec­urity and Nutrition in the World 2021’, states that four Asian countries—Afghanistan, Bangla­desh, Nepal and Sri Lanka—were not aff­ected at all by pandemic induced loss of job/bus­iness and reduction in income levels. Rather, they have improved their positions on the indicator ‘Propor­tion of undernourished populat­ion’ by the fol­l­­­o­­wing percentages, respectively: 4.3, 3.3, 1.3 and 0.8, between 2018-20 and 2017-19.

The FAO defines hunger as an uncomfortable or painful physical sensation caused by insufficient consumption of dietary energy. It beco­m­es chronic when the person does not consume sufficient calories (dietary energy) on a regular basis, to lead a normal, active and healthy life.

Taking a dig at the Modi government, Con­g­ress tweeted from its official handle: “Our nat­ion des­erves better than a PR obsessed gov­e­rn­ment that can’t be bothered to feed its own people.” Cong­ress leader Kapil Sib­al tweeted, “Congratulati­ons Modi ji for era­dicat­ing: 1) poverty 2) hun­ger 3) making India a glo­bal power 4) for our digital economy 5) …so much more. Global Hunger Index: 2020: India ranked 94, 2021: Ind­ia ranks 101. Behind Bangl­a­desh, Pakistan & Nepal.”

India’s ranking also came for criticism from several quarters. Dipa Sinha, assistant professor of Economics at Delhi’s Ambedkar University and member of the Right to Food Campaign, said there is lac­una in the way GHI is calcula­ted, but the Indian government’s reaction is also wrong.

“The Indian government’s main criticism is that GHI is based on a Gallup survey. That’s wro­ng. GHI is based on FAO undernourishment data, which is based on government data. So, the methodology can be debated, but that’s bec­a­use, as many others have pointed out, it may have underestimated the extent of hunger, rat­her than overestimating it. In fact, going by a more robust methodology, India would have performed much worse in the post-Covid period.”

Notably, child nutrition trends across India, on the basis of stunting and wasting, had impr­oved in 2016-18, but the government has failed to provide data since 2018. The Covid-19 lockdown, along with economic setbacks like job losses, migration, closure of anganwadis and schools failing to provide mid-day meals to children, could easily have stymied its impact.

Sinha also points out: “The problem with GHI is there is no annual data for all countries, so ran­ks are not comparable.” But she emphasises the message of GHI is that India continues to languish in its rankings, which needs to be add­ressed. Hunger is not just about filling the sto­m­ach, but also nutrition.

“Covid has impacted food consumption and nutrition in India. A small survey has shown that expensive foods like dal and oil are disappearing from plates, amid high inflation and disruption of government food schemes like ICDS. We should take GHI as a warning signal and try to do better in the next report, rather than being in denial,” she suggests.

The Indian government claims that:

…it has implemented Pradhan Mantri Garib Kalyan Anna Yojna (PMGKAY) and Atma Nirbhar Bharat Scheme (ANBS) in response to the pandemic. Food­grains amounting to 32.2 million tonnes in 2020, and 32.8 million tonnes in 2021, were
allocated free of cost to 80 crore people.

…it has given 204 million women who hold accounts under Prad­han Mantri Jan Dhan Yojna an ex-gratia of Rs 500 per month for three months between April and June 2020.

…it has given Rs 1,000 per month from April to June 2020, to 30 million aged widows and “divyang” people to tide over Covid-19 induced financial difficulties.

(This appeared in the print edition as "Hunger Games 2021")