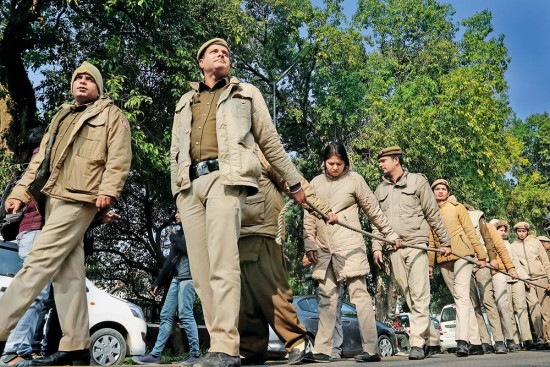 “The police force is far from efficient; it is defective in training and organisation; it is inadequately supervised; it is generally regarded as corrupt and oppressive; and it has utter­­ly failed to secure the confidence and cordial cooperation of the people.”

These were observations of the Pol­ice Commission headed by A.H.L. Fra­ser (1902-03) appointed by the then Governor-General, Lord Curzon. It makes for depressing reading—not bec­ause of the content alone, but also because of the realisation that time has stood still for India’s police forces over the intervening period of about 120 years. It is a sad reflection on our policymakers, and does our governance no credit. In fact, there has been further deterioration, insofar as the state pol­ice forces have been deeply politicised over the last four decades. There is today a strong nexus between police, bureaucracy, politicians and criminals.

What are the reasons for this downward slide? As years rolled by, there has unfortunately been a qualitative change in how politics is practiced in this country. The fire of idealism, whi­ch had inspired the first generation of post-­Inde­pendence politicians and civ­il servants, started dimming, as pow­er became an end in itself. Gradu­ally, a symbiotic relationship develop­­ed between politicians and civil servants.

As observed by the National Police Commission, “What started as normal interaction between politicians and the services, for the avowed objective of better administration with better awareness of public feelings and expe­ctations, soon degenerated into different forms of intercession, inter­ven­tion and interference, with mala-fide objectives unconnected with public interest.” The Shah Commission, which was appointed to inquire into the excesses committed during the Emergency, warned that “If a recurrence of this type of subversion is to be prevented, the system must be overhauled with a view to strengthen it in a manner that the functionaries working in the system do so in an atmosphere free from the fear of consequences of their lawful actions, and in a spirit calculated to promote the integrity and welfare of the nation and the rule of law”.

The overhaul suggested was unfortunately never taken up, and, as commented by David H. Bayley, the rule of law in the country was “undermi­n­ed by the rule of politics”. Several commissions were appointed from time to time at the state and central levels for reforms in the police, but their core recommendations, which sought to insulate the police from political pressure, were never accepted. No wonder, the situation went from bad to worse, and today, we have a police which, according to Human Rig­hts Watch, is in a dangerous state of disrepair. “Decaying, colonial-era pol­ice stations and posts across India are stocked with antiquated equip­­ment and lack sufficient police vehicles, phones, computers and even stationery”.

In 2006, the Supreme Court gave a historic judgment on police reforms. It issued six directions to state governments with a view to insulating the police from external pressures, giving security of tenure to the DGP and other officers on operational assignments, separating investigation from law and order in metro cities, giving autonomy to police in personnel matters, and setting up complaint authorities at the district and state levels to enhance accountability of police. It was expected that the judgment would mark the beginning of a new era for the police, and that it would henceforth become people-friendly. Alas! Those dreams were never realised. The formidable combination of politicians and bureaucrats ensured that the directions were violated in letter and spirit by all states.

The Justice Thomas Committee (2008-10), which was appointed by the Supreme Court to monitor the implementation its directions, expressed its dismay over the “total indifference” of states on the issue of reforms. Subsequently, the Justice Verma Commi­ttee (2012) recorded its views that “if the Supreme Court’s directions in Prakash Singh are implemented, there will be a crucial modernisation of the police to be service-oriented for the citizenry in a manner which is efficient, scientific and consistent with human dignity”. The observations of Justice Thomas and Justice Verma, however, had no impact on state governments.

What is the position today? There are eig­hteen states which have passed laws ostensibly to implement the Supreme Court dir­ections, but in fact, they attempt to circumvent the directions. The cou­rt’s order stipulated that its directions will be operative “till framing of the appropriate legislations by central and state governments”. Acts were pas­sed by the state governments to legitimise the status quo, and by doing so, forestall any supervision by the apex court. The remaining sta­tes passed executive orders. An analysis of the Acts and the executive ord­ers clearly show that the states have violated the judicial directions in their essence.

Meanwhile, incidents of a very disturbing nature continue to happen at regular intervals in the absence of mandated reforms. In Maharashtra, it was agonising to see the police being used by a party in power as an ins­trument of extortion, to collect money from hotels and dance bars. In West Bengal, as testified by NHRC, there was “retributive violence by supporters of the ruling party, against supporters of the main opposition party”, and local police was “grossly derelict, if not complicit, in this violence”. How long are we going to suffer this political misuse and abuse of the police?

Police reforms, it must be emphasised, are essential for a healthy demo­cracy.  Police should be able to book and prosecute persons of criminal antecedents irrespective of their status in any political party. It is quite alarming that the number of persons of criminal background in our assemblies and Parliament is showing a steady upward trend, and that in the 2019 Lok Sabha, their numbers had gone up to 43 per cent.

Police reforms are also essential to sustain the momentum of economic progress. Good law and order is the sine qua non for development. Invest­ments would never flow into a country if corporate groups are not assured of good returns.

As of now, the internal security situation of the country is far from satisfactory.  An important reason for that is the kind of ramshackle police we have. A professional, well-equipped and motivated police force led by capable officers, having the required degree of operational autonomy, would have dealt with these problems—the separatist movement in J&K, multiple insurgencies in the Northeast, and the Maoist insurrection—far more effectively.

Above all, as emphasised by the Supreme Court, “the commitment, devotion and accountability of the police has to be only to the rule of law”. It should act as a ‘people’s police’ rat­her than as a ‘rulers’ police’. It should consider itself accountable to the laws of the land and the Constitu­tion of the country. This transformation must take place if India is to eme­rge as a progressive, modern nation.

The Prime Minister, while addressing Director-Generals of Police in Guwahati on November 30, 2014, enunciated a concept of SMART Police—sensitive and strict, modern and mobile, alert and accountable, reliable and responsive, trained and tech savvy—a dream we all cherish. The central and state governments must initiate positive measures to transform this dream into a reality.

(This appeared in the print edition as "Brighter Shade of Khaki")