Behind the Olympic failure of our shooters and archers lies fractious, money-grubbing coaches, complicit federations, huge pressure on athletes and faulty training 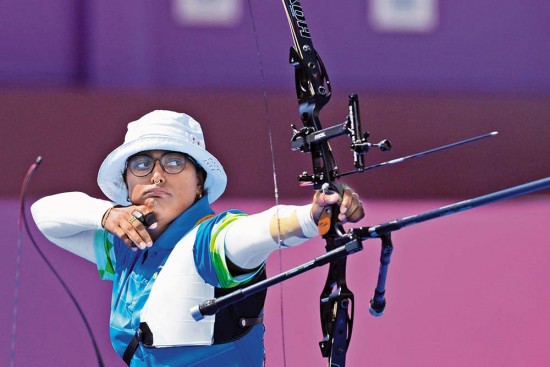 It sometimes takes a foreign sensibility to sharply feel the anomalies and blemishes of a nation. “In India, when you win, you are everything and when you lose, you are nothing,” said Sjoerd Marijne, the Dutch coach of the Indian women’s hockey team that made history in the Tokyo Olympics. The girls entered an Olympic semifinal for the first time and showed enormous fighting spirit to get there. PM Narendra Modi—whose government laid renewed emphasis on the ‘beti’ (girl child)—called up the hockey girls to console them for missing out on the bronze medal. When the Centre toasted India’s record seven medals at Tokyo 2020, women athletes like P.V. Sindhu, Mirabai Chanu, Lovlina Borgohain, Rani Rampal and Vinesh Phogat enjoyed the spotlight at the PM’s party on Independence Day. But many celebrated athletes of the Indian contingent were cast aside in the shadows. Leading up to the Games, the much-touted shooters and the archers were expected to lead the race towards India’s ‘double digits’ haul. Fifteen shooters and four archers, all world class, drew a blank in Tokyo.

Indeed, in this hour of a post mortem, the National Rifle Association of India and the Archery Association of India are under the scanner for the poor performance of their athletes. Despite the government spending crores of taxpayers’ money on months-long camps in Europe, foreign coaches and allowances, the returns from two consecutive Olympics have been nil. Given their world rankings and international stature, our shooters and archers were among the most fancied in Tokyo. Most performed below par.

“Winning World Cup golds don’t guarantee you a place in the Olympic finals. Olympics are not about what you have done in the past. They are about how you can handle the pressure and shoot well on the given day,” explains former rifle shooter Gagan Narang, who won a bronze medal at London 2012.

Unlike an archery team rich in experience—Deepika Kumari and Tarundeep Rai were in their third Olympics, while Atanu Das was in his second —there were 11 debutants in the shooting squad. While pressure on young Manu Bhaker, Saurabh Chaudhary, Elavenil Valarivan or Yashaswini Deswal is understandable, Deepika’s constant failure at Olympics has triggered a serious search for explanation.

While dealing with pressure is key in Olympics, it is certainly not the only reason for shooters and archers failing. “The weight of expectation was there…and when the PM and President call up to wish you and the media, which normally focuses on cricket, hypes all this up, pressure increases 100-fold. This was clearly evident…the heart and pulse rates of our archers on the monitors in Tokyo showed their agitated state. With so much external pressure, how does one focus in a sport where the difference between winning and losing is in decimals?” observes former archer Sanjeeva Singh.

Shooting coaches have tie-ups with gunmakers and want a shooter from their academy to win an Olympic medal—all for the money.

However, before external pressure, there was crucial external support and sadly, horrendous mismanagement. After Rio 2016, the government spent lavishly, while corporates joined the quest for Olympic medals. The onus on talent development lies on national federations, but what if they turn into money-making rackets? The NRAI has ordered a probe into the failings in Tokyo, but insiders say the federation itself should be blamed for creating bad blood among coaches who are rumoured to be driven by the lust for money, not Olympic glory.

“If it is a failure, it is a collective failure. Not just the coaches—shooters, support staff, personal coaches and NRAI needs to share responsibility,” says Narang. His 2012 Olympics teammate Vijay Kumar, who surprised all with a silver in London, pinpoints the real problem—all-pervading conflict of interest.

Several coaches who travelled to Tokyo with the 15 shooters run flourishing private shooting academies. The NRAI has been promoting former shooters as coaches—most run academies, offer special coaching for a hefty price and have tie-ups with equipment manufacturers, especially Swiss and German pistol makers. Every coach wants a shooter from his academy to win an Olympic medal. The financial benefits are enormous. Apart from winning government incentives and awards like a Dronacharya, it is the greatest advertisement for the academy and the gunmaker. Many former shooters also occupy NRAI positions and are agents for gun and ammunition makers. “It’s a coterie. A powerful group has taken control, a lot of money exchange hands and there is no team feeling,” says an NRAI insider. “This commercialisation of shooting is a massive issue. When we went to London, we just had two foreign coaches, one each in pistol and rifle. They gave us instructions and we trained accordingly. There was no personal equation…no conflict of interest,” says Vijay Kumar.

We can be hopeful of Paris 2024 if the NRAI can stem the rot within and give shooters the direction and peace of mind they need, feels Vijay Kumar. “We should start preparing a core group, shortlist shooters who can win the quotas for Paris and keep monitoring their performance,” suggests Narang, who runs a private academy, but doesn’t coach.

The problem bedeviling archery is a mix of conflict of interest and inability to embrace latest scientific systems. “For 40 years, we didn’t have the science to back our archers. They have tremendous skill, but fall short when up against players who are products of a scientific process and mentally more stable when playing the big points,” exp­lains Sanjeeva Singh. The process to put archers through a proper system is only starting in India, with a high-performance centre in Sonepat, Haryana.

“We need 20 Deepika Kumaris and 20 Atanu Dases. If one or two players have been dominating Indian archery then either there is a lack of talent or a massive flaw in administration,” says Singh. That there is no dearth in talent has been proven. In the just-concluded World Archery Youth Championships in Wroclaw (Poland), India won a rec­ord 15 medals (eight gold, two silver and five bronze). Komalika Bari was a standout archer, winning gold medals in both cadet and junior recurve. “With Parth Sushant Salunkhe, Komalika is a good bet for the mixed events,” says Singh.

The AAI is now thinking beyond Deepika and Atanu. India is sending a young team to the world championships in South Dakota, US, in September. None of the four Olympians made the cut. They lost in the trials after returning from Tokyo. “For years the likes of Deepika and Atanu have dictated things at AAI. Youngsters never got the exposure they deserved. They were virtually controlling the system. Now all that is going to change as we’ll explore the scientific route and prepare for Paris 2024,” says Singh.

The story of shooting and archery could just be the tip of an iceberg—a system that stinks of one-upmanship and corruption. It’s for the SAI to do a deep dive into all sports federations, even the Indian Olympic Association. All the bonhomous photos from last week look good, but to do better than a 48th finish in Tokyo, Indian sports will need to clean its Augean stables.

(This appeared in the print edition as "Duds, Suds & Missed Marks")