No one’s done it since the summer of ’69. Not even Federer. Now Djokovic closes in on a full Grand Slam…Rod Laver is waiting at the finishing line with a smile and a mug of beer. 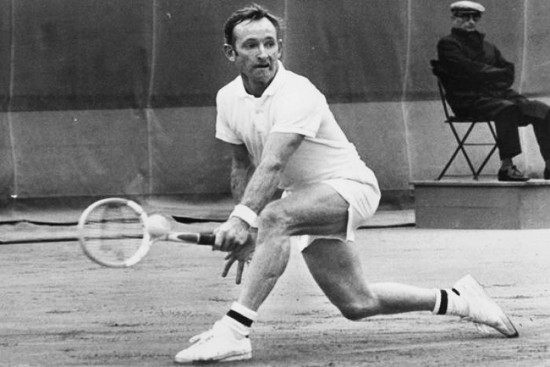 If Novak Djokovic wins the US Open to complete the first calendar-year Grand Slam in men’s tennis since 1969, ‘Rocket’ Rod Laver will be there to welcome him into a remarkably exclusive group. “I’d be very happy to shake his hand if he can win the four Slams. I’d be happy for him to be a part of—whether it’s a ‘club’ or not, I don’t know,” Laver said with a chuckle during an interview with The Associated Press.

No man has won the Australian Open, French Open, Wimbledon and US Open in the same season since the slightly built, red-haired, left-handed Australian did it for the second time 52 years ago. That was so long ago that the Beatles were just about to release Abbey Road and America was still reveling in Neil Armstrong’s moonwalk. The decades have rolled along, and Laver— who also completed a true Grand Slam as an amateur in 1962—and Don Budge, who did it in 1938, remain the only men to accomplish the greatest feat in tennis.

It requires skill on a variety of surfaces now: The US Open and Australian Open are played on two types of hard courts, the French Open on red clay, Wimbledon on grass. It also requires avoiding injury. And figuring out each opponent for 28 matches spread out over about eight months. And handling each day’s particular weather. And so on. “A lot of things can go wrong,” Laver said.

As it is, Djokovic is the first man since Laver to claim a season’s first three major trophies. Roger Federer and Rafael Nadal, for example, never even managed to get just halfway there by winning the Australian Open and French Open in the same year. Three women have gone 4 for 4 for a true Grand Slam, most recently Steffi Graf in 1988. Serena Williams came close in 2015, winning that year’s first three majors before losing to Roberta Vinci in the US Open semifinals.

The quiet, unassuming Laver, who has lived in San Diego County for years, said he never got any special satisfaction about being the last man to win the Grand Slam. And a newcomer is welcome. “It really doesn’t worry me,” Laver said, holding a cup of beer in that powerful left hand. “When Don Budge won it in 1938, and I did it in ’62, he says: ‘We’re in a special club here. There’s only two of us in it’.” Laver, now 83, was 31 in 1969.

Djokovic is a 34-year-old from Serbia. He shares the men’s mark of 20 career major titles with Federer and Nadal, who are injured and not playing in the US Open.