The ancient hunter-hunted relationship between indigenous Bornean people and bearded pigs is changing under pressure of deforestation due to expanding oil palm and rubber plantations. 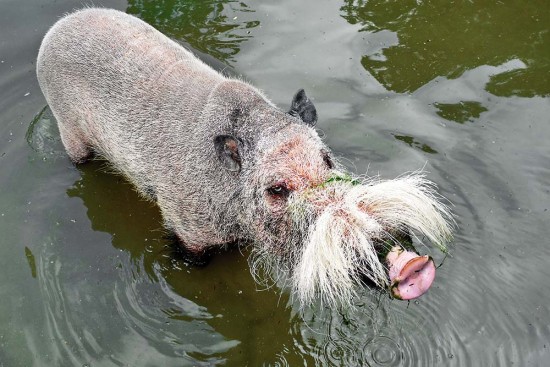 For over 40,000 years, indigenous communities in Borneo have hunted and eaten bearded pigs. These 100 kg nomadic creatures that roam the island in Southeast Asia are central to the livelihood and culture of some Bornean people. In fact, some hunters rarely talk of anything else. But this ancient relationship is at risk. Oil palm exp­a­­­­nsion and urbanisation are forcing changes to hunting practices in Sabah, a Malaysian state in Borneo. The oil palm industry has cleared much of Borneo’s lowland tropical rainforests to make way for plantations.

Hunting is one of the most fundamental and enduring of human–wildlife relationships. But the changing dynamic between Borneo’s pigs and its people is a powerful reminder of the fragility of these connections. There is much at stake right now, for both the hunted and the hunter.

As its name suggests, this pig has a prominent beard. It’s a large species thought to move up to 650 km in search of food, in herds of up to 300 individuals. Wild meat can contribute to as much as 36 per cent of meals in indigenous Bornean societies, and bearded pig meat accounts for 54-97 per cent of this by weight. But widespread deforestation and agricultural expansion (primarily oil palm and rubber plantations) have drastically reduced bearded pig habitat in recent decades. The bearded pig is now listed as vulnerable on the International Union for Conservation of Nature’s red list. The onslaught of African Swine Flu is complicating matters. For the pigs, the deadly virus is an extra burden for a species already in decline. Sabah has been on the frontlines of the oil palm boom since the late 20th century. As of 2015, roughly 24 per cent of Sabah’s land area was covered by oil palm or pulpwood plantations. Sabahans sometimes take work with oil palm companies, own their own oil palm smallholdings or move to urban areas for jobs in manufacturing and retail. Those who remain in rural parts of the state have reduced access to croplands and forests in some areas which, among other negative impacts, restricts their ability to hunt game. Hunters are adapting new methods to pursue pigs inside plantations. Hunting in oil palm plantations was easier overall than hunting in forests because the walking was generally less tiring (and they could sometimes hunt from a car), it was easier to see pigs and foraging locations were more predictable.

Many hunters say bearded pigs were “wilder”, “smarter” and more skittish than they had been in the past. Comments included: “The pigs can smell man; they are getting wilder because they are always getting shot by men.”

(This appeared in the print edition as "Foreign Hand")