All Indians Want Ram Temple To Be Constructed, It Is Not An Electoral Issue: Shahnawaz Hussain

RSS chief Mohan Bhagwat had last week demanded a law to enable construction of the Ram temple, saying it was necessary for the "self-esteem" (of the people) and to usher in an "atmosphere of goodwill and oneness". 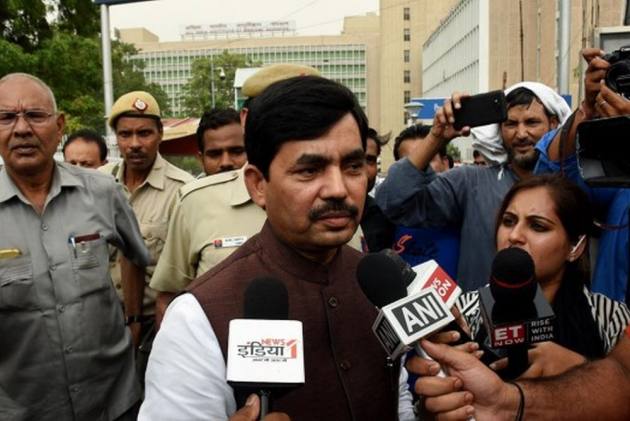 BJP spokesman Shahnawaz Hussain on Tuesday said the construction of Ram temple in Ayodhya was not an electoral issue for his party but a "matter of faith".

RSS chief Mohan Bhagwat had last week demanded a law to enable construction of the Ram temple, saying it was necessary for the "self-esteem" (of the people) and to usher in an "atmosphere of goodwill and oneness".

Hussain said the BJP's official stand was that the Ram temple issue was pending before the Supreme Court. In a democracy, various demands are made and the government hears out each one of them, he said.

SC Rejects All Pleas, Including That Of BJP Leader Subramanian Swamy, Seeking To Intervene In Ayodhya Dispute Case

"All Indians want the temple to be constructed. It is not an electoral issue, but a matter of faith for the BJP," he said at the 'Mumbai Manthan' conclave organised by television news channel Aaj Tak.

Hussain was participating in a debate on whether the Modi government will accept Bhagwat's demand for a law to construct the Ram temple.

In his customary Dussehra address last Thursday in Nagpur, Bhagwat said "politics was delaying the construction of Ram Mandir" and that it was in "nobody's interest to test the patience of society without any reason."

The Ayodhya case is currently before the Supreme Court and the next hearing is scheduled on October 29.

During the conclave here, AIMIM chief Asaduddin Owaisi claimed the Ram temple issue was a ploy to "deflect attention" from the rising prices of petrol, value of dollar (as the Indian rupee is sliding), mob lynching and sexual harassment charges against former Union Minister M J Akbar.

"If RSS is a socio-cultural organisation, how can it put pressure on the government to bring a law for construction of Ram temple?" the Lok Sabha member from Hyderabad asked.

He claimed Muslims were feeling "unsafe" under BJP rule.

"Regional parties will play a key role in deciding the next prime minister," he said, adding that he holds UPA chairperson Sonia Gandhi in high esteem.

"I have a lot of respect for her (Sonia)," he was quoted as saying.

The sangh has been associated with sentiments of crores of countrymen in the efforts for construction of a magnificent Ram temple at the birthplace of Lord Rama, who is the personification of the life energy of the nation and icon of upholding the dharma, Bhagwat said.

"The construction of the temple is necessary from the self-esteem point of view, it will also pave the way for an atmosphere of goodwill and oneness in the country," he said.

There are four title suits pending before the Lucknow bench of the Allahabad High Court over the disputed land at Ayodhya. The legal battle over the 80 feet by 40 feet land far predates the VHP movement to construct the Ram temple.

The first case filed in January 1885 by Mahant Raghubir Das seeking permission to construct a temple on the chabutara outside the Babri Masjid was dismissed.

The mandir-masjid issue then remained in suspended animation until the night of December 22, 1949, when trespassers broke into the Babri Masjid and installed an idol of Ram. Subsequently, the city magistrate attached the premises.

The case has always moved at a snail’s pace. Out of the 100 witnesses, only 23 have testified till now. On an average, the examination of a witness takes a fortnight. Says former Delhi High Court chief justice Rajinder Sachar: "It is really impossible to find whether Ram was born on that exact piece of land. The matter will go on and on for years."

A three-judge bench of the Allahabad High Court, in a 2:1 majority ruling, had in 2010 ordered that the land be partitioned equally among three parties -- the Sunni Waqf Board, the Nirmohi Akhara and Ram Lalla.