The counting of votes for Madhya Pradesh and Mizoram will take place on December 11, along with that of Rajasthan, Chhattisgarh and Telangana 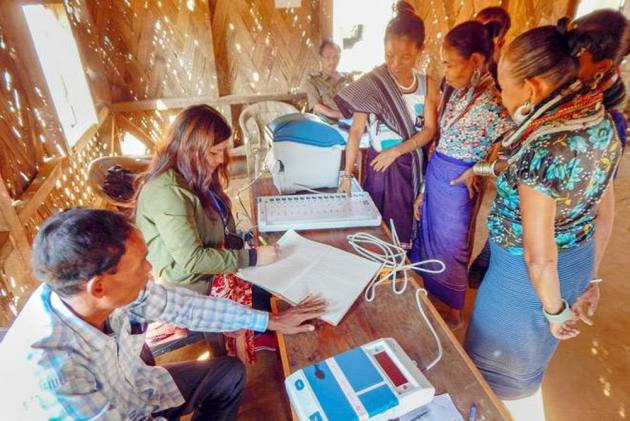 Altogether 65.5 per cent voters exercised their franchise in the Madhya Pradesh Assembly
elections Wednesday, just over seven per cent less than the figure in the previous polls.

In the 2013 Assembly election, 72.69 per cent turnout was recorded, an election official said.

Meanwhile, in Mizoram around 73 per cent votes were cast in the assembly polls on but the figure is expected to rise as there were long queues of voters outside polling booths to exercise their franchise, Chief Electoral Officer Ashish Kundra said.

In MP, the Congress is seeking to oust the BJP which has been in power in for the last 15 years, while in Mizoram Chief Minister Lal Thanhawla is seeking a third consecutive term as the BJP looks to uproot the Congress in its last bastion in the Northeast.

The counting of votes will be held on 11 December.

Here are the LIVE updates:

1:25 pm: On demands of extending polling time at a certain booth in Madhya Pradesh raised by Congress on account of faulty EVMs, Chief Election Commissioner OP Rawat said that there are provisions for extending voting timings, and local officers can take a call on it as they see fit.

CEC O P Rawat on Jyotiraditya Scindia's request to EC to extend polling time due to EVM malfunction: There are provisions for the extension of time, the local officers can take the call as they see fit. The matter does not need to be handled by the commission. pic.twitter.com/OznJsAKzcJ

A 101 year old woman after casting her vote in Agar Malwa #MadhyaPradeshElections2018 pic.twitter.com/DXlhuqyD5e

11 am: Brisk polling is underway in Mizoram with nearly 29 per cent of 7.68 lakh voters casting their votes in the first three hours on Wednesday, an official said.

11:15 am: BJP leader Kailash Vijayvargiya on his way on a horse chariot to cast his vote in Madhya Pradesh.

BJP leader Kailash Vijayvargiya on his way on a horse chariot to cast his vote for the #MadhyaPradeshElections2018 in Indore. pic.twitter.com/iFHLZanCxb

We’re 100% certain that BJP will form government with an absolute majority. We have set a target of 200 seats and our lakhs of volunteers are working to make it a reality: Madhya Pradesh Chief Minister Shivraj Singh Chauhan after casting his vote in Budhni #MadhyaPradeshElections pic.twitter.com/RNQMYXBFQs

Madhya Pradesh Minister Yashodhara Raje Scindia casts her vote at a polling station in Shivpuri. She is up against Congress' Siddharth Lada. #MadhyaPradeshElections2018 pic.twitter.com/FrpyOXfZ7m

I request my sisters and brothers of Mizoram, particularly the dynamic youth of the state, to turnout in large numbers and vote.

Visuals from a polling station in Bhopal. Polling for 227 constituencies in the state will begin at 8 am, while voting for 3 constituencies has already begun. #MadhyaPradeshElections2018 pic.twitter.com/RnjsoctPbV

Among the 2,907 candidates in Madhya Pradesh, the BJP has fielded candidates in all 230 seats, while the Congress is contesting in 229 seats leaving one seat, Jatara in Tikamgarh district, for Sharad Yadav-led Loktantrik Janata Dal (LJD).

The BSP has fielded 227 candidates and the SP is contesting in 51 seats. There are 1,102 Independent candidates.

On the other hand, in Mizoram, the Congress has fielded 40 candidates while the BJP and MNF are contesting in 39 and 40 constituencies. Around 7.7 lakh voters will decide the fate of 209 candidates.

Mizoram: Visuals from a polling station in Zarkawt, Aizawl. Polling for the 40 constituencies in the state will begin at 7 am. #MizoramElections pic.twitter.com/BnKJsWf36E