The on-going anti-rape protests may have been triggered by a publicly enacted brutality, but they are about a much greater anger, a pent-up fury about many, many issues 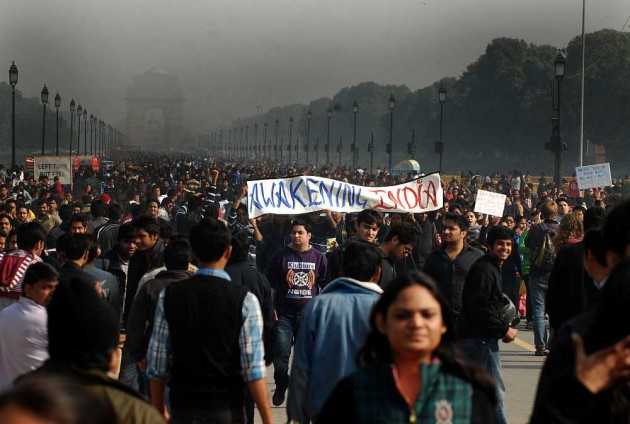 The ongoing anti-rape protests in Delhi have provoked many responses amongst most of us, and often these are inconsistent. I see no problem with that. The statement issued by the ‘Progressive Women’s Groups and Individuals’ reflects the concerns many of us have about treating this incident as exceptional, or about the dangers of the spontaneous calls for violent brutal retaliation, be it castration, or the death penalty. Many of us are completely agreed on the fact of the frighteningly long history of systematic rape—as part of caste, class and state power. There have been any numbers of instances in the last decade alone that have stood testimony to this—and undoubtedly the protests in all these instances have been far more muted or localised. As indeed the deafening silence in almost all reported instances of sexual violence, brutality and rape, in Delhi alone, as recently as in the last couple of years. The girls and women attacked in these cases have come from diverse backgrounds, old and young, Indian and foreign, northeastern and working class, and most often not upper caste. And barring the odd petition, a Facebook post, or maybe a statement issued by students and progressive groups (in exceptional circumstances) there have been scant protests about these.

The question then is: How must we continue to respond to this moment of protest in the national capital? Many of us have joined, and hopefully will continue the struggles in different ways, in diverse fora. Yet I ask this with deep concern, and advisedly, because of a kind of suspicion, and an easy dismissal as elite, of the Delhi protest. In recent years, violence against women in urban areas has met with different kinds of protests. One was that of the Pink Chaddi campaign in 2009, in response to the Sri Ram Sene goons attacking women in a pub in Mangalore. More recently, large numbers of young women and some men joined the “slutwalk” protests. While I supported the courage, and humour, of the former (Pink Chaddi), the latter (slutwalk) has left me with far more ambivalent feelings, mainly as most of our urban ‘slutwalkers’ would never support the slut workforce, or sex-workers. Alongside, I have had a deep ambivalence about the politics of certain kinds of linguistic reclaiming—especially of terms associated with sex work (whore, slut), animals (bitch, cow) and female body parts (cunt)—as the use of these, as rape, are about power and humiliation—and to my mind, to be rejected. Not reclaimed.

Yet the present protests are about a much greater anger, and reflect a complex defiance. Even as some of the early demands were born out of an inchoate and un-thought through rage (death penalty, castration) it is amply clear that the slogans have been vast and varied. They have also gone way past the “phool nahin chingari” moment of the older Left (later hijacked by the Right). The new slogans are also about right to public spaces, autonomy, freedom, love—about the right to live life without constant surveillance, policing, protection—and even the shackles of love.  This is a response to the pent up fury about many, many issues in the lives of girls and women. And while this particular instance of publicly enacted brutality triggered this protest, it is very clear from the groups and individuals associated, the ongoing discussions, some of the profoundly serious responses in newspapers and websites, and the nature of demands made, that the protesters (i.e. all of us) are asking for far more than retributive violent justice.

Then why are we all focusing only on those who demanded death penalty? Why assume that everyone on the street is proto-fascist? If the Right (Hindu and other) claims the street as its own, is this not the moment for all progressive forces to reclaim it right back? Is that not what the politics of reclamation should be about?

So the question I am asking myself is: How can I take the anger, urgency, and extraordinary power of this moment back to another public—that of the classroom and the university—that I inhabit as part of my daily life?

Two responses to sexual violence in the very recent past stand out in my mind. One is the poet Meena Kandasamy’s chilling and eloquent account of her experience of brutality in an intimate relationship. Yet despite images that were viscerally horrifying, she left one with another image—of a fighter, a survivor, and a woman who told it as it ought to be. The other is the almost complete silence that has shrouded a recent incident of what appears to have been a brutal date-rape on JNU campus. In this instance, barring a couple of pamphlets and some attempts at filing a case by concerned faculty and students, there has been absolutely no response. Yet women students and faculty have railed against this everywhere—in classrooms, hostels, corridors, email—in angry whispers that never quite became a shout.

So when I look at the young women, and many of their men friends and comrades, protesting on the streets of Delhi, I know that they are out there shouting and screaming for all these months and years of silence. They are protesting this one rape; but they are also screaming about the daily injustice they deal with—in families, in relationships, in classrooms. They are shouting against rape and sexual violence—but they are also fighting all forms of violence against women.

Many of us in the last week have repeatedly cautioned about the problems of ignoring endemic, systemic, violence in this country. We have spoken of the silence shrouding the violence against Dalit and Adivasi women; that its quotidian presence instead of horrifying has been naturalized. We have reminded ourselves of the selective protests about state violence—and how deeply implicated the Indian state—army, police, and judiciary—is in subjugating people, and protests (Kashmir, northeast) through rape and sexualised violence. We have seen also the complete silence when the question of brutal rape and sexual violence in communal riots is raised. Let alone any form of justice being provided.

For the record, let me also remind us of yet another fact. That in all these instances the questions of rape and sexual violence continue to be treated as “women’s issues”. That its principally women’s groups, whatever their affiliation, that protest these. And it is precisely this, and the attendant marginalisation of the issue that leads to its dying out unceremoniously. So even as there is a lot of scepticism about “spontaneity” at the moment, I think it is worth remembering that organized parties, especially amongst the Left and Progressive forces, have scarcely ever treated sexual violence as a serious enough issue around which to organize and mobilise. And it is precisely this silence and absence that allows the Hindu Right to step in strategically and speak of “protecting women’s honour”, and finding appropriate forms of justice—for which read more violence and vendetta killings.

Writing presently from that supposed bastion of egalitarianism—Kerala—thanks to its two Ms (matriliny and Marxism) let me also record that this is the one place which has witnessed no public protest at this moment (unlike many other cities in the country). Why is this unsurprising? Kerala has always been deeply misogynist and casteist; also, its supposedly progressive groups have replicated and exacerbated such violence—often through silence, or strategic distancing from the issue. I say this only because there is often an assumption that the Right is the sole repository of all forms of violence against women; in India we know for a fact how far this is from the truth.

The present protests are a deeply hopeful moment for me. It is a time when we can begin discussions afresh; speak across differences and build alliances. Even as spontaneity may have its limits, let us make the most of the extraordinarily energetic, and deeply political moment that has now been created by the young women and men, and others in Delhi.

In the hope that 2013 will mark a new beginning—for justice, and equality—for all!