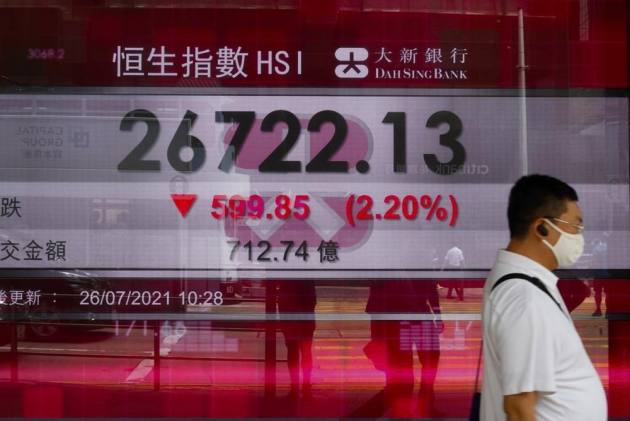 World shares were mostly lower on Monday after stocks rallied to records on Wall Street, with the Dow Jones Industrial Average closing above the 35,000 level Friday for the first time.

Investors are awaiting a meeting of the Federal Reserve this week for indications of future policy as new outbreaks of coronavirus threaten the US and global recoveries from the fresh news of regulatory moves against Chinese IT and education industry companies pulled shares lower in Hong Kong and Shanghai.

In Japan, preliminary factory and service activity surveys showed a slowdown linked to recent tightening of pandemic precautions due to surging coronavirus cases.

The flash purchasing managers index for the services sector fell to 46.5 in July from 48 in June, on a scale of 1-100 where 50 marks the break between expansion and contraction.

“Short-term disruption to activity is likely to continue until the latest wave of COVID-19 infections passes and restrictions enacted under the state of emergency laws are lifted," Usamah Bhatti, economist at IHS Markit, said in a report.

Hong Kong's Hang Seng sank 4.1 per cent to 26,192.32 after Chinese regulators said they were further tightening restrictions on technology companies, requiring a “rectification" of misleading pop-up windows and other practices by software applications, or apps. The Shanghai Composite index dropped 2.3 per cent to 3,467.44.

On Friday, the Dow, S&P 500 and Nasdaq all finished with gains of better than 1 per cent for the week.

They each returned to records after brushing aside the sharp downturn that trimmed 1.6 per cent off the S&P 500 on July 19. The market has rebounded as big companies reported better profits than expected and as investors once again saw any dip in stocks as merely a chance to buy low.

Despite a rebound in new coronavirus cases, the US economy has been recovering at a torrid pace, with the question being how much growth will slow in upcoming months and years.

The yield on the 10-year Treasury was steady at 1.26 per cent on Monday. It has dropped from a perch of roughly 1.75 per cent in late March, reflecting alarm over rising inflation.

With roughly a quarter of all the profit reports in from S&P 500 companies, nearly 90 per cent have topped Wall Street's already high expectations for the spring.

Companies in the index are on pace to report roughly 74 per cent growth for earnings in the second quarter from a year earlier, according to FactSet.

That would be the strongest growth since the economy was exploding out of the Great Recession at the end of 2009.

In other trading, US benchmark crude oil lost 62 cents to USD 71.45 per barrel in electronic trading on the New York Mercantile Exchange. It picked up 16 cents to USD 72.07 on Friday.

Dish TV Gets 2-Month Extension From RoC To Conduct AGM

PLI Scheme: Only Manufacturing Firms Registered In India To Be Eligible For Textile Sector

Centre To Stick To Its Borrowing Plans For FY22, Despite Surge In Revenue Collection

Sensex Plunges Over 100 Points In Early Trade, IT Stocks Drag