Cong Couldn’t Find Any Other Candidate Than Manvendra To Contest Against Me: Raje

Vasundhara Raje has been representing Jhalrapatan seat in the House of 200 assembly seats since 2003. 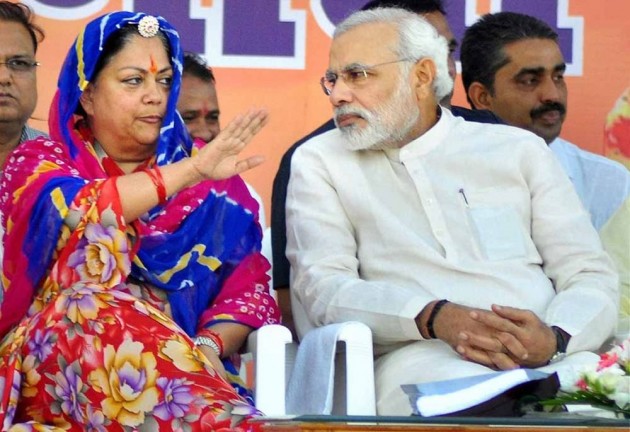 Rajasthan Chief Minister Vasundhara Raje on Saturday said the Congress fielded former BJP leader Jaswant Singh's son Manvendra Singh from her Jhalrapatan constituency in the upcoming assembly polls as it could not find any other candidate.

Her remark came a few hours after the Congress released it second list of 32 candidates, fielding Manvendra Singh against her from Jhalrapatan constituency.

"The Congress could not find any candidate and he (Manvendra Singh) was to be given ticket from somewhere and therefore, he was sent here (Jhalrapatan)," Raje said addressing the public after filing her nomination papers in Jhalawar district.

Sachin Pilot, Ashok Gehlot Will Both Contest Rajasthan Elections, Say ‘We Are United’

"But they should know that it is not a fight of one person, this is a contest fought by Jhalawar and Rajasthan, which is a family," she said.

The chief minister was accompanied by party leader Shahnawaz Hussain, her son and Jhalawar MP Dushyant Singh, among others.

Reacting to the Congress announcement, state BJP president Madan Lal Saini said the decision will have no impact and the party will retain the seat.

He said Singh, who left the BJP and joined the Congress last month, is not a big name and will face defeat.

"There will be no impact on results and the chief minister will retain the seat," he told PTI.

Saini said being born in a Rajput family does not give anybody a "big name".

Congress candidate Meenakshi Chandrawat, who stood on second position, had secured 29.53 per cent votes in the polls.

Raje has been representing Jhalrapatan seat in the House of 200 assembly seats since 2003.

Manvendra Singh, who had won Barmer district's Sheo assembly constituency in 2013, joined the Congress last month in New Delhi after quitting the BJP.

His father Jaswant Singh was denied ticket by the party in the 2014 Lok Sabha elections following which he contested polls as an independent candidate and lost the seat to BJP's Sonaram.

The decision of not allowing Jaswant Singh to contest the Lok Sabha polls antagonised many in the Rajput community who held Raje responsible for ignoring him for an "outsider".

Disgruntled with the BJP, Manvendra Singh held a 'Swabhiman' rally in Barmer and quit the party in September.