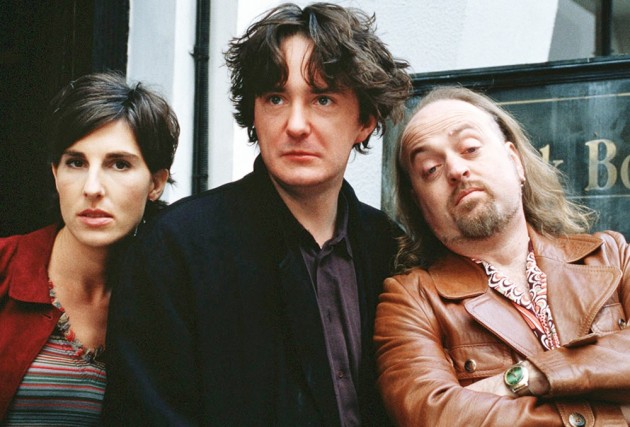 British comedies are completely differet as compared to American comedites. The major distinctions between the two is probably down to the cultural and social set ups. While Americans generally dont take themselves too seriously or necesarilly mind making fun of themselves, Britishers' stiff upper lip attitude, is often what gets them into trouble.

One of the best portrayals of that kind of a humour is the dark comedy series 'Black Books'. The four-season show, revolves around just three central characters, who have absolutely no social life, only because their eccentric personalities.

The foul-mouthed and ill-tempered Bernard has absolutely no interest in anything, apart from smoking cigarettes and drinking wine. From not wanting to run the bookstore as a business, to constantly judging every buyer who dares walk into his store, Bernard is bitter, lonely and ofcourse, supremely funny. Fran, a hopeless romantic, is Bernard’s best friend, who shares Bernard’s passion for smoking and drinking. However unlike Bernard, Fran yearns to meet people, make relationships, but because of her eccentric personality, fails to connect with anyone else other than Bernard.

Untill one day, she finds Manny, an angst ridden accountant, who turns up at the bookstore after Bernard promises him a job during a drunken night out. Fran is quick to realise that she and Manny can probably help Bernard socialise a little more, which would help her in finally making some friends, and hopefully even find love.

The wit and humour in the show usually is a result of Manny and Fran’s countless efforts to get Bernard out of the store, but all of them end in chaos, and push them further into Bernard's cynical view of the world. Then there are also several plenty funny scenes from the bookshop, which also doubles as Manny and Bernard's residence. It is unlivable, given the state of dirtiness and is often inhabited by animals and other unidentified creatures, while disorder is a frequent aspect of the running of the shop.

The episodic nature of the show, which brings in a new story every episode, is what keeps the show ticking and as a viewer, you don’t get bogged down by the show’s central theme of loneliness, and Bernard’s antics to stay away from human beings in general.

So, even if you don’t find it funny, you’d probably thank your stars wishing you weren’t locked down in a bookshop with a character like Bernard Black!

Salman Khan Urges Fans Not To 'waste' Milk On 'Antim' Posters, Says 'Give It To Poor Kids'