In an exclusive chat with Outlook, the 53-year-old actor talks about the content on TV in the last 20 years, the advent of OTT platforms, and her new series. 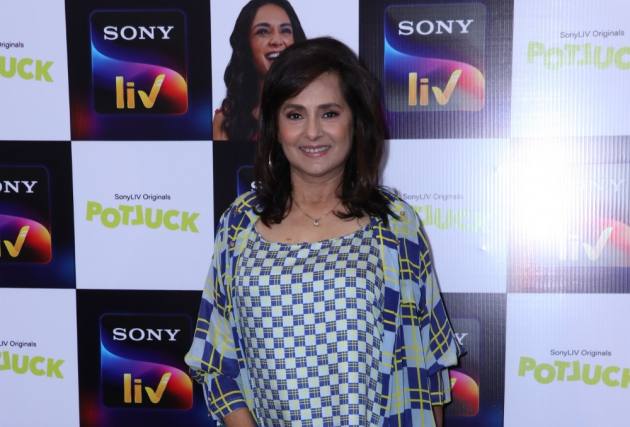 Actor Kitu Gidwani was one of the biggest names in the TV industry after she became part of TV shows such as Air Hostess, Junoon and Swabhimaan. But as Gidwani puts it herself, “TV has degenerated big time in the last 20 years,” that her willingness to be seen on TV slowly faded away, and she instead did chose to be part of films. But with the advent of OTT, Gidwani is back on the smaller screen once again. Her upcoming show, 'Potluck', which will soon start streaming on Sony Liv is a family comedy, which Gidwani feels was never offered to her before in career.

In an exclusive chat with Outlook the 53-year-old talks about the content on TV in the last 20 years, the advent of OTT platforms, and her new series. Excerpts from the interview.

What made you say yes to a series like ‘Potluck’. Tell us a bit about your character?

Basically, many things we were over there right in the beginning, like the fact that Kunal Dasgupta had come back into the industry, and he was spearheading, and the fact that this was a kind of series which has not been done at all, which is a slick urban comedy. Because normally people ignore the upper-class urban demographic and the fact that it was going to be really excellent cast with an excellent director and that it was going to be a very… kind of a sophisticated community with with no major drama and melodrama. That is really exciting to do, something that is close to our hearts and what we know alive. So that was very exciting. I have not been offered such a thing before, so I was very keen to try. I love comedy. I really, really love comedy. And I really like showcasing my comedic talents. Very rarely do I get to do that. So that was a major draw. All these four-five factors.

As an actor, apart from the script and the makers, what are the other things that you keep in mind before you say yes to a project?

For me, it’s the script, it's the writing and that is the main thing. And then, of course, the other is peripheral, like the remuneration or the director, who is the showrunner, who is the producer? Of course, they have to have a good reputation and they have to be tried and tested mostly. And yeah, I think every actor basically looks for a good script. Well, written and the kind of atmosphere getting into is very important, which is spending so much time, 20, 30, 40 days. It really can make or break. Especially in this series, the chemistry was so fantastic. Half of us knew each other from before, and so chemistry was amazing. Seven, eight of us. So, I think that has really come through, if I’m not mistaken.

With the advent of OTT platforms, how do you think will it be for an actor like you, who has been part of film and TV industries and how do you see all these industries, probably finally blending into this one big industry?

Well, actually, we're seeing it for the last two years, aren't we? We're seeing that even big film stars are doing, like Saif (Ali Khan) and Nawazuddin (Siddiqui), and all these people are already doing, you know. I don't think most people, most actors like me, don't have a choice. Actually, if I am offered a good film script, I will do a good film. If I get a good television, which is highly unlikely today. But now what's happening is everyone is rushing to OTT with their talent. And there's a lot of talent in this country, a lot of writing talent. So, I guess people are really excited. And so, what's happening is we are all gravitating towards OTT, and OTT has the ability to be large, like large scale with fabulous panoramic landscapes. And you can also do like a more like a soap, close up kind of format. So, OTT gives you that kind of scope. So, everyone's gravitating to OTT, whether it's a theatre actor or a film actor or television. I do all three. And all the work is on OTT. Now who knows how long it will last.

Also, since you have been such a popular TV star, how do you see OTT, help TV actors now, in terms of success and money, as compared to what it used to be with TV shows?

That's a very tough question. TV has degenerated big time in the last 20 years. You know what kind of content we are watching on TV. In fact, I do not do any TV. Unfortunately, I think it's a shame because it has such a large scope and you can do really meaningful work for, you know, 1.4 billion Indians. You can really show them meaningful content which is not being shown. Let's face it right. TV has failed Indian audiences as far I'm concerned. I'm categorically saying all these big networks have failed Indian television audiences where you could do really… what we used to do in the past on Doordarshan is no longer being done. You'll never find Govind’s Tamas or you'll never find all the comedies that I did, and you know, the ‘Banegi Apni Baat’ or the ones with Swaroop Sampat’s ‘Yeh Jo Hai Zindagi’ and all that. You will never find those, subtle, lovely, family comedies. So, TV has failed India. So now even TV actors who were fed up are now moving to OTT. Because an actor will always go towards a good script and good content. So hopefully now everybody's watching OTTs and maybe TV will change. Maybe we'll get a nice content as well as the Saas Bahu soaps. Fingers crossed.

Also, as an actor how conscious do you get about getting stereotyped or getting similar roles. How much of an effort is there on your part to do different roles and scripts?

I don't do any stereotypical roles anymore. I'm done with that. Luckily, in my thirty-year career I have played all kinds of roles. But I definitely do not like to be stereotyped because you want to use your talent. And I think I have a lot of it. So, I would love to have people cast me into different roles. So, I'm hoping that I have done in the last two years I played very, very nice different kinds of roles. That's really encouraging to see for an actor like me. I like serious. I like comedy. Nobody would like to be typecast, as nobody would like to be in a factory and make the same product again. And so, it's the same concept that applies to actors.

As an actor, how important is it for you to get the details of your character right? And to what length do you generally go, to get that right.?

As much as the script offers me. If the script offers me a detailed, very subtly, nicely written character, then I love to work on the appearance, the physicality, the mood, general mood of the character. Whether it’s a serious character, sombre character, flighty character, mysterious, whatever it is, as long as the script and the director support you. If the script is badly written and it does not offer you any nuances, then what can you do? It's very difficult. So, it's a symbiosis between the script, director, and actor. And, yes, I absolutely love changing my physique. In fact, in one murder mystery, I've just done, I played a very down at heel detective from Goa. Very low. Not very rich, but very quirky. Kind of Agatha Christie kind of. So, in that I really worked on my appearance, the way I move, something different from what I'm playing now.