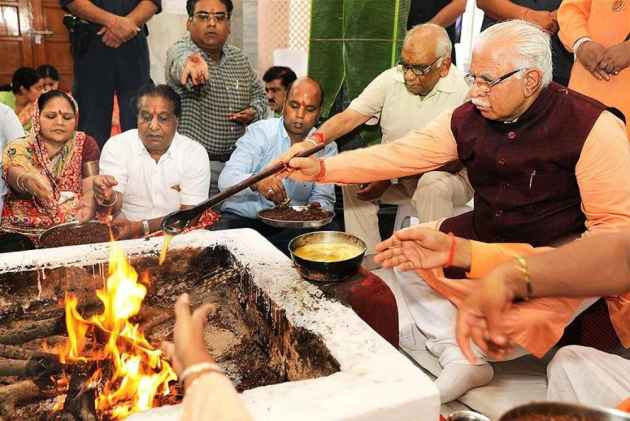 The Haryana government is likely to take disciplinary action against the teachers who defied the state government's order to attend a compulsory 'priest training' on October 29.
The teachers were asked to take a training to carry out functions of priests ahead of the village fair at Yamuna Nagar Temple, reports Zee News.
According to the bizarre diktat by the Manohar Khattar government, the teachers were supposed to take training to carry out the functions of 'pujari' (priest) and even distribute 'prasad' during the fair at the temple, reports News18
The teachers, who opposed skipped the training session, have been asked to explain the reason for their absence.
Times Now claimed that it has accessed the government note, issuing this controversial order.
BJP leader Jawahar Yadav, however, told ANI that the teachers were called in for only "prasad" distribution and not for being given training to be priests.

Teachers called in for 'Prasad' distribution at fair in Yamuna Nagar&not for being given training to be a priest:Jawahar Yadav,BJP #Haryana pic.twitter.com/FKFlbDhyxY

The opposition parties are hitting out at the state government for 'saffronising the entire event'. The state government is being criticised for attempting to put rituals above the education of the students.
Last month, the Haryana government had again come under fire after it issued ordered that no license would be provided to set up new meat shops in residential areas of Gurugram.
(With PTI inputs)