A long-pending demand of the Sikh community to build a religious corridor linking India's border district of Gurdaspur with a historic gurudwara in Pakistan may finally be fulfilled with both the countries announcing that stretches would be developed in their respective areas. 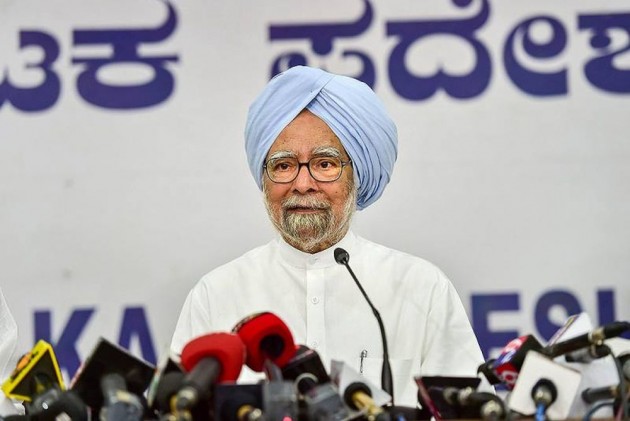 Asked about Prime Minister Narendra Modi's comments that the corridor will act as a bridge between the people of the two countries, Singh, however, cautioned that there were many hurdles to cross before it could be achieved.

"There are many hurdles and one should not underestimate those hurdles. But any beginning is a good beginning, I hope it is successful," he told reporters on the sidelines of a conference titled "Towards Peace, Harmony and Happiness: Transition to Transformation", organised by the Pranab Mukherjee Foundation.

'What Has Happened In 1947 Has Happened': PM Modi Says Kartarpur Corridor Will Act As Bridge Between India, Pakistan

Singh, however, did not say what he thought the hurdles were.

On first Sikh guru Guru Nanak Dev's birth anniversary Friday, Modi had said, "Had anyone ever thought that the Berlin Wall would fall? Maybe, with the blessings of Guru Nanak Devji, the Kartarpur corridor will not just remain a corridor, but act as a bridge between the people of the two countries."

In a significant decision, the Union Cabinet had cleared a proposal Thursday to develop a corridor from Dera Baba Nanak in Punjab's Gurdaspur district to the International Border to facilitate Indian pilgrims to visit Gurdwara Darbar Sahib in Kartarpur, Pakistan.

A long-pending demand of the Sikh community to build a religious corridor linking India's border district of Gurdaspur with a historic gurudwara in Pakistan may finally be fulfilled with both the countries announcing that stretches would be developed in their respective areas.

"On behalf of Pakistan I have extended an invitation to External Affairs Minister Sushma Swaraj, Capt Amarinder Singh and Navjot Singh Sidhu to attend the groundbreaking ceremony at Kartarpura on Nov 28, 2018," Qureshi tweeted.

In a letter to Qureshi, Swaraj thanked him for the invite and said she was unable to travel to Kartarpur Sahib due to prior commitments including election campaign in Telangana and that India will be represented at the ceremony by Union Ministers Harsimrat Kaur Badal and Hardeep Singh Puri.

Swaraj also hoped that the government of Pakistan will expedite the construction of the corridor in order to ensure that "our citizens can pay their respects at the Gurudwara Kartarpur Sahib using the corridor as soon as possible."

Prime Minister Imran Khan will inaugurate the groundbreaking ceremony of the facilities on the Pakistani side on November 28.

The move to open the corridor could break the chill in bilateral ties.

The India-Pakistan ties nose-dived in recent years with no bilateral talks taking place. The ties between the two countries had strained after the terror attacks by Pakistan-based groups in 2016.

India called off a meeting between Swaraj and Qureshi on the sidelines of the UN General Assembly in New York in September, citing the "brutal" killing of three policemen in Jammu and Kashmir and the release of the postal stamps "glorifying" Kashmiri militant Burhan Wani.

Prime Minister Narendra Modi Friday hoped that the Kartarpur corridor would act as a bridge between the peoples of India and Pakistan that might lead to a better future as he referred to the fall of the Berlin Wall to underline the importance of people-to-people contact.

Pakistan Foreign Office on Friday said the "Kartarpur Spirit can be a step forward in the right direction from conflict to cooperation, animosity to peace and enmity to friendship." PT