According to data shared by officials, the number of active COVID-19 cases in Delhi Prisons till Thursday stands at 13, including nine jail staff. 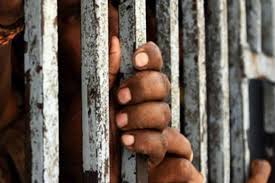 Four inmates and nine jail staff in the three prison complexes of Delhi are presently undergoing treatment for COVID-19, officials said on Sunday.

Of the four inmates undergoing treatment, three of them were recently sent to these jails, they said.

"A total of 88 inmates tested positive for COVID-19 so far. Eighty-two of them have recovered and two have died, leaving four active cases. A total of 215 prison staff contracted the infection so far. Of them, 206 have recovered and nine are still under treatment," Director General (Prisons) Sandeep Goel said.

On August 21, the Delhi Prisons Department had stated that none of the inmates in the three jail complexes of Tihar, Rohini and Mandoli are COVID-19 positive and that the coronavirus situation in jails here has improved.

Goel too had tested positive for COVID-19 last month and has recovered.

The first case of the coronavirus was reported in Rohini Jail on May 13. Two COVID-19 positive inmates of Mandoli Jail died on June 15 and July 4. Both were senior citizens, according to the officials.

They had said ever since the outbreak of the pandemic in March, the Prisons Department remained vigilant and instructed its staff to not only maintain hygiene and social distancing among themselves but also spread awareness about the infection among inmates in the three jail complexes.

The inmates are being given lime water to boost their immunity, they had said.

The officials said a major step taken towards maintaining social distancing among inmates was to decongest the jails.

Earlier, the Delhi Prisons department had requested the city government to extend the emergency parole granted to convicts by one month in view of the pandemic.

According to the officials, there are currently 4,491 inmates, comprising 3,310 undertrials on interim bail and 1,181 convicts on emergency parole, who are out of jails as part of the prisons department's recent decongestion drive.

Goel had earlier emphasised that its decongestion drive and spreading awareness among the inmates as well as staffers played a huge role in tackling the pandemic.

He had said restricted entry, repeated medical screening of inmates, isolation of those with symptoms, compulsory 14-day quarantine for new inmates were some of the key measures which were implemented since early March to check the spread of the deadly virus.

"We took timely precautionary measures. Every new inmate was isolated. After medical screening, we quarantined them initially for three-four days but soon we extended the quarantine period to 14 days which was compulsory for any new inmate," Goel had said.

Besides, the jail staffers were also advised to not report to duty and remain at home in case they were unwell, he had said.