‘A Nightmare’: Healthcare Workers In Delhi Tell What It Meant To Face The Peak Of Second Wave Of Covid-19

In addition to working excruciatingly long hours in challenging circumstances that exposed them to the virus, the medical staff also battled personal issues at home.

In India's first line of defence in the war against the pandemic have been the healthcare workers, right from the ambulance driver, attendants, nurses to doctors. Stretched to their limits, at times helpless, overwhelmed by the sheer number of patients, and every time under immense risk themselves, some of these healthcare workers shared their professional and personal challenges with Outlook.

“It was like a nightmare”, recounted Naveen Bhaira, a nursing officer at Safdarjung hospital in Delhi, as he shared the trials and tribulations he faced during the second wave of Coronavirus. Bhaira’s voice faltered, as he searched for words to explain the trauma he had been a witness to ever since the second wave of Coronavirus gripped the country.

For the past 14 years, Bhaira has been working at Safdarjung hospital. He has been looking after Covid patients ever since the pandemic began. “Last year it felt like we were able to help our patients but this year things went beyond imagination”.

The Sisters We Forgot: Nurses Risk Their Lives To Save Ours, But Are We Grateful To Them?

Dr KK Aggarwal: A Doctor Who Believed Lord Krishna Was First Counsellor For All Illness

What Bhaira tried but failed to describe was a feeling of helplessness that resonated across the medical fraternity in India as it faced the mammoth task of tackling the devastating second wave of Covid-19.

India, on May 7, recorded 4, 14, 188 cases, about 32% higher than the world’s previous peak reported by the U.S. last year. For the already underequipped and underfunded healthcare system of the country, it meant a torrent of patients arriving at hospitals gasping for air.

Amid a shortage of resources like hospital beds, medical oxygen, medicines, ambulances, etc., the medical fraternity was confronted with the unimaginable quandary of “choosing” who can they save.

“So many things were out of our control. We didn’t have enough beds and turning families of Covid patients down because of lack of beds and high-pressure oxygen supply was mentally taxing”, said Dr Amit Chaudhary, a resident doctor at Fortis Memorial Research Institute in Gurugram.

“In the last year, we saw fewer patients and were able to save most of them. This year, the success rate has dropped, we were managing to save just 20-30% of the critically ill patients which really affected our morale”, he said.

Even non-Covid wards are full of patients suffering from post-Covid complications, he added.

The second wave of Covid-19 saw people across the country scrambling first for empty oxygen cylinders and then standing in long queues to get them filled. With social media inundated with SOS calls, the panic was reaching pandemic proportions. So much so that even the frontline medical staff was relying on stop-gap arrangements, sometimes even having to share resources between different patients.

For Manish Kumar Arya, a Diplomate of National Board (DNB) trainee at Sir Ganga Ram Hospital (SRGH), which is one of Delhi’s biggest and most high-profile hospitals, every patient he could not save added to his trauma.

“I had a patient named Manisha whose oxygen levels dropped to 18%. She needed a BiPAP machine, and we had none. The doctors started posting a request on WhatsApp groups to arrange a BiPAP machine. Finally, another patient lent us his own BiPAP machine through which we could get her oxygen levels to 70%”, Manish told Outlook. However, despite their best efforts,  he was informed in the morning that Manisha had passed away.

“We saw a patient we knew we could have saved if we had the required resources but, we didn't have the resources and so we lost them, imagine the toll it takes”.

As she worked at SRGH 16 hours a day, donning her PPE suit for at least 9 hours every day in the scorching summer of April and May, Dr Preshika Rawat complained of the VIP culture that prevails in India.

“So many times, the medical staff is asked to give preferential treatment to certain people. Even during a health crisis, people are not realising how overburdened we are”, said Preshika.

“I have lost the track of days in a week”, said Amit who on some days was working for 18 hours continuously without getting week-offs.

The enormity of the second wave of Coronavirus was underscored by the fact that despite roping in doctors from various departments, several doctors working in different hospitals across Delhi said the hospitals are so understaffed that they have had to skip their meals and even go sleepless for days to keep the shifts running.

When Outlook spoke to the general secretary of Resident Doctors Association (RDA) of Ram Manohar Lohiya Hospital (RML), Dr Saif Nizam on May 2, he said, “Irrespective of our departments, all resident doctors had been posted on Covid duty. We were working with just 60% percent of the staff as the rest had contracted Covid-19”.

Underlining the shortage of medical staff he said, “My department has 6 units and in normal circumstances, each unit would have 6-7 senior residents but during the second wave of Coronavirus each department had just 1 or 2 resident doctors”.

Fear For Their Own

In addition to working excruciatingly long hours in challenging circumstances that exposed them to the virus, the medical staff also battled personal issues at home.

“I had to leave my 9-month-old baby at home with my mother-in-law who is a cancer patient. My wife and I are doctors and had to be on duty. We cannot choose to not work in any situation”, said Dr Ashu Kumar Meena, vice president, Safdarjung RDA. 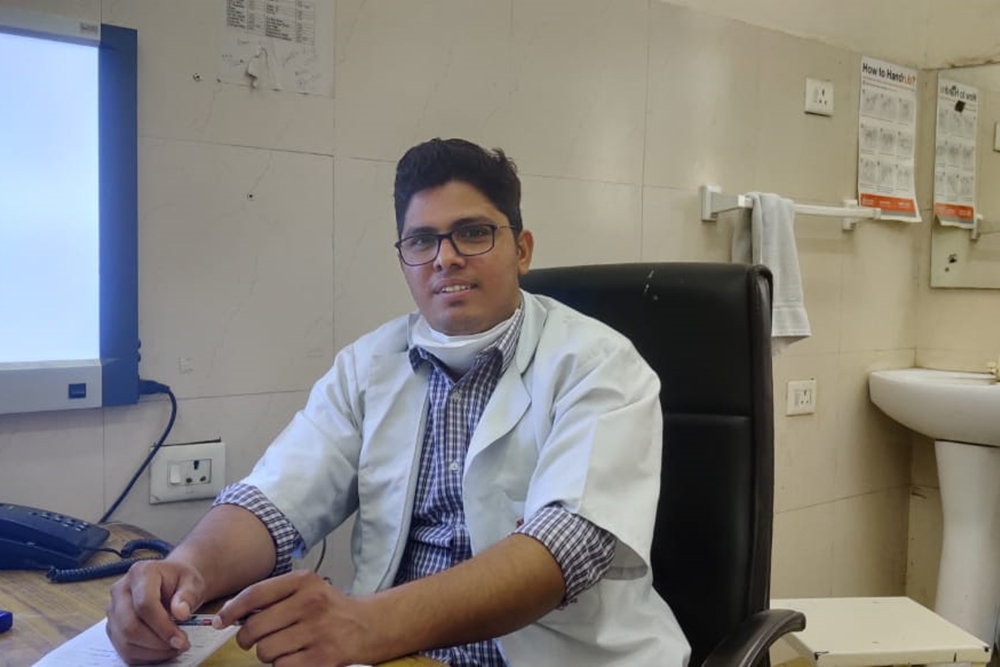 “Almost every colleague I know of has either a friend or a family member who succumbed to Covid”, said Dr Saif who like most of the doctors is concerned for his family’s safety.

Speaking of his aging parents, Dr Saif said, the situation was so critical "that even if we or our parents needed a bed, we would have not been able to get one”.

Worried about exposing his family members he said, “I am the only person in my family who was stepping out of the home. Four members of my family had tested positive, who should I blame”?

Kiran Kumari, a nursing officer who has been working at LNJP hospital in Delhi for the past 14 years and whose husband is also a nursing officer at Safdarjung hospital recalls how her husband spent countless days stressed for the safety of their nine-year-old son.

“I had to send my husband to his parents’ home in Rajasthan for he started losing sleep worrying about our son. He used to think what would happen to our son in case we both die”, she said.

“I had never seen patients suffocating and dying like this”. Talking about losing their colleagues she said, "It scares to see so many of your colleagues dying”. 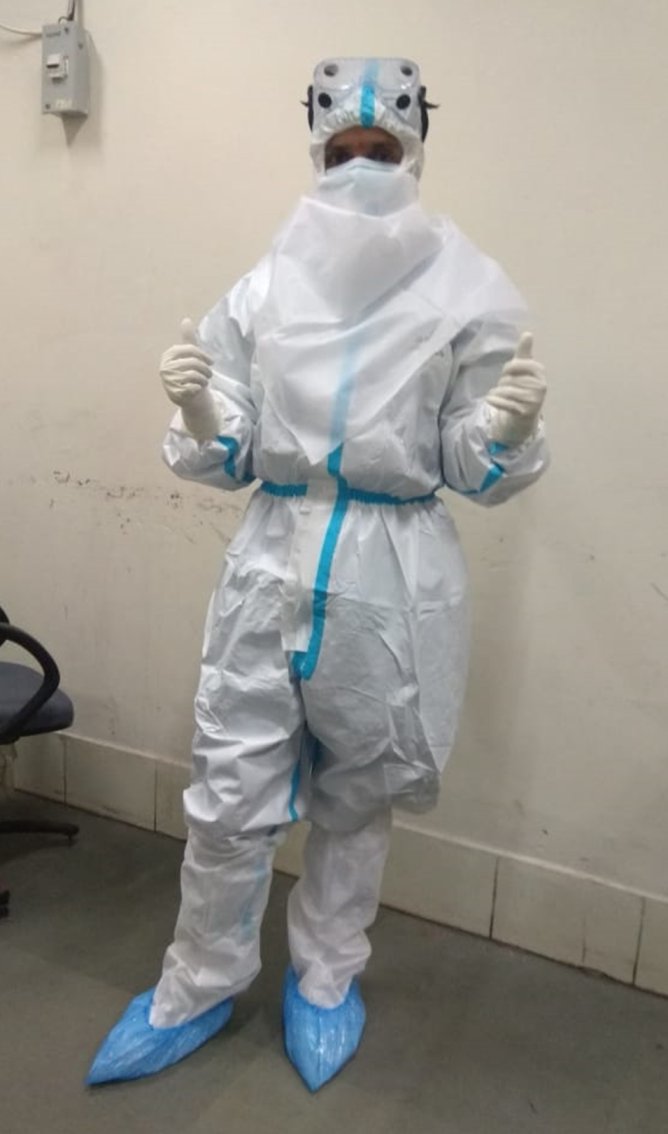 According to Indian Medical Association (IMA), as of May 26, India had lost as many as 513 doctors to Covid-19 in the second wave of Coronavirus alone, of which 103 have died in Delhi.

“Most of the doctors who succumbed to the virus were not immunised against the virus”, claims IMA president Dr JA Jayalal.

“The government should come up with measures ensuring priority treatment to the doctors in case they get infected and ensure that their treatment cost is taken care of”, he adds.

Most of the doctors Outlook spoke to said that doctors in Delhi were also struggling to find beds in case they needed one and it was only after RDAs of respective hospitals took action that provisions were made for doctors and staff members who were testing positive for Covid-19.

“Considering the Covid scenario during the second wave in India, I can say that we did not learn from countries like the UK, Italy or the US which had an overwhelming number of Covid cases and instead became complacent”, said Dr Saif.

“All our knowledge that we gained during the first wave of Covid has miserably failed”, he adds.