The two NSAs held talks about the prevailing situation between India and Pakistan following the Pulwama terror attack and the Indian air strike in retaliation for the incident. 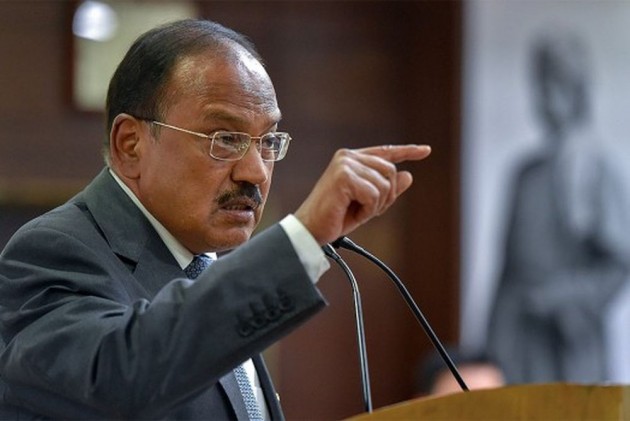 National Security Adviser Ajit Doval spoke to his US counterpart John Bolton on Tuesday and is learnt to have told him about the proof that India has of Pakistan having used F-16 fighter jets in its aerial engagement with India last week despite Islamabad's denials.

The two NSAs are also learnt to have discussed the fresh proposal being considered by the UN Security Council's sanctions committee to designate the Pakistan-based terror group Jaish-e-Mohammed's chief Masood Azhar a global terrorist.

They held talks about the prevailing situation between India and Pakistan following the Pulwama terror attack and the Indian air strike in retaliation for the incident.

Doval is learnt to have conveyed India's position over Pakistan's attempts at war mongering.

Sources said that the use of F-16s, which have been supplied to Pakistan by the US, came up during the discussion.

Pakistan has denied using F-16s in the aerial engagement following India's strike at a JeM terror camp at Balakot. However, India has produced evidence in the form of a piece of used missile which can only be carried by F-16 fighter jets.

India is also learnt to have shared the evidence with the Defence Attache at the US embassy here and sources said it is for the US to investigate into any violation by Pakistan of the sale terms concerning use of F-16 aircraft.

The fresh proposal to designate Azhar as global terrorist was moved last week by the US, UK and France and the Security Council Sanctions Committee will have 10 working days to consider it.

India feels that a decision to designate Azhar a global terrorist will build pressure on Pakistan and it will be difficult for the neighbouring country to deny that it is not a global hub of terrorism.

The JeM has claimed responsibility for the Pulwama terror attack in which 40 CRPF personnel were killed.

China, a veto-wielding permanent member of the Security Council, had blocked earlier proposals to name Azhar a global terrorist.