Amid Reports Of Rift Between JD(S), Congress, KC Venugopal To Meet Party Leaders, MLAs In Karnataka

Venugopal's visit to the city gains significance as the coalition leaders are planning for an expansion or a reshuffle of the Kumaraswamy cabinet, aimed at saving the government. 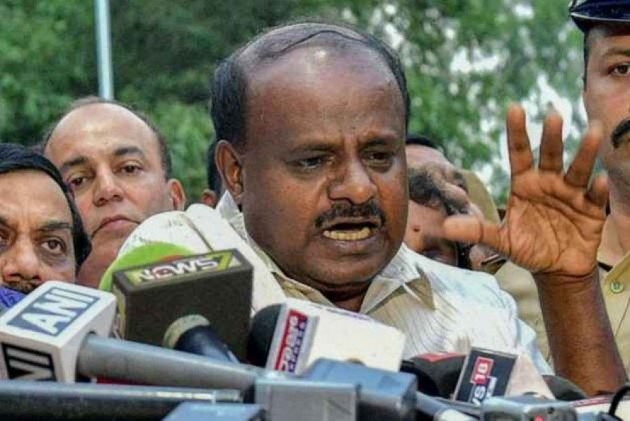 Amid reports that a cabinet expansion or reshuffle is on the cards in a bid to save the Congress-JD(S) coalition government in Karnataka, AICC general secretary K C Venugopal will hold a series of meetings with party leaders and legislators in the city on Wednesday.

Venugopal's visit to the city gains significance as the coalition leaders are planning for an expansion or a reshuffle of the Kumaraswamy cabinet, aimed at saving the government.

Voices of dissent are gaining ground within the Congress in Karnataka as two of its MLAs met former chief minister S M Krishna at his Bengaluru residence on Sunday.

The coalition government in the southern state has been fragile since its inception with reports of its collapse surfacing every then and now.

Venugopal's visit to the city gains significance as the coalition leaders are planing for an expansion or a reshuffle of the Kumaraswamy cabinet, aimed at saving the government.

While Siddaramaiah on Tuesday had said it would be an expansion to fill three vacant posts, there are also reports quoting top sources in the government that some ministers may be asked to step down to make way for disgruntled legislators.

Out of 34 cabinet ministers, the Congress and the JD(S) have shared 22 and 12, respectively.

Currently, three posts are vacant, two from the JD(S) and one from the Congress.

Even as coalition leaders, including the chief minister, struggled to save the government, ministerial aspirants started lobbying on Tuesday.

Many Congress legislators have expressed strong reservation against priority being given to the disgruntled, sidelining loyalists.

With a growing number of aspirants and less posts in hand, it remains to be seen how Venugopal and Congress leaders manage the situation.

In the meeting, Venugopal and the state party leadership may ask few ministers to make way for others, sources said.

However, a section of party leaders believe that a cabinet expansion may be suitable at this moment, as any attempt for reshuffle may further worsen the situation.

Amid simmering discontent within the Congress, the coalition leaders fear the BJP, spurred by the Lok Sabha poll outcome in which it bagged 25 of the 28 Lok Sabha seats in the state, may poach some MLAs.

Coalition partners Congress and JD(S) managed to win one seat each in the Lok Sabha polls.

Jarkiholi, who has been hobnobbing with the BJP for some time, had threatened to resign from the party along with some MLAs after the Lok Sabha polls.

The BJP had predicted the collapse of the coalition and increase in its tally in the assembly after the LS poll results, claiming that 20-odd Congress MLAs were unhappy and may take "a decision" anytime.

Over the last two days, Kumaraswamy himself met several disgruntled legislators, including Jarkiholi's confidant and Athani MLA Mahesh Kumathalli, and is said to have promised to look into their issues.

He is also said to have given an assurance about including Jarkiholi in the cabinet.

The BJP, with 105 MLAs, is the single-largest party in the 224-member Karnataka Assembly. The ruling coalition has 117 members -- 78 of the Congress, 37 of the JD(S), one of the Bahujan Samaj Party (BSP) and one Independent.