Four army personnel, a BSF jawan and six civilians were killed along the LoC on Friday 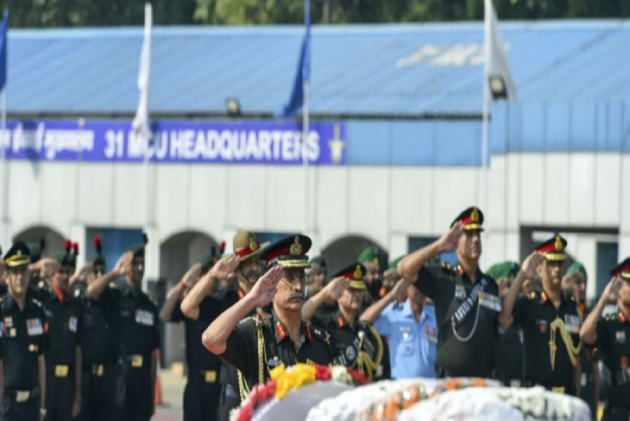 The Army on Sunday paid floral tributes to four soldiers who were killed due to ceasefire violations by Pakistan in several sectors along the Line of Control (LoC) in Jammu and Kashmir.

Five security forces personnel were among the 11 people killed in multiple ceasefire violations by Pakistan along the LoC between Gurez and Uri sectors of Jammu and Kashmir on Friday. In retaliation, the Indian Army caused extensive damage to Pakistani Army's infrastructure, officials said. The fatalities on the Indian side include four army personnel, a BSF jawan and six civilians.

"The Army today paid tribute to Havildar Hardhan Chandra Roy, Naik Satai Bhushan Rameshrao, Gunner Subodh Ghosh and Sepoy Jondhale Rushikesh Ramchandra, who made the supreme sacrifice on 13 November 2020 in North Kashmir. In a solemn ceremony at Badamibagh Cantonment, Lt Gen B S Raju, Chinar Corps Commander and all ranks paid homage to the gallant soldiers on behalf of the proud and grateful nation," an army spokesman said.

"In the unprovoked artillery shelling by the Pakistani Army, these brave hearts received multiple splinter injuries. They were provided immediate medical aid and evacuated to the nearest military medical facility but unfortunately they succumbed to their injuries," the spokesman said.

Gunner Ghosh (22) had joined the army in 2017, the spokesman said, adding, he belonged to Raghunathpur village of West Bengal's Nadia district and is survived by his wife and parents. Sepoy Ramchandra (20) hailed from Bahirewadi village of Maharashtra's Kolhapur district. "Ramchandra had joined the army in 2019 and is survived by his parents," the spokesman added.

He said the Chinar Corps also acknowledges the supreme sacrifice of Sub-Inspector Rakesh Doval of Border Security Force who laid down his life during the ceasefire violation in Naugam sector.

"The mortal remains of the brave hearts were taken for last rites to their native places where they would be laid to rest with full military honours. In this hour of grief, the army stands in solidarity with these bereaved families and remains committed to their dignity and well-being," the spokesman said.