Most Backward Communities With Us, BJP Will Be Wiped Out In UP: Ex-Ally Om Prakash Rajbhar

In an interview with Outlook, Om Prakash Rajbhar, president of Suheldev Bhartiya Samaj Party (SBSP) spoke about his party's poll aspirations in Uttar Pradesh and the need for inter-party alliances to beat the BJP. 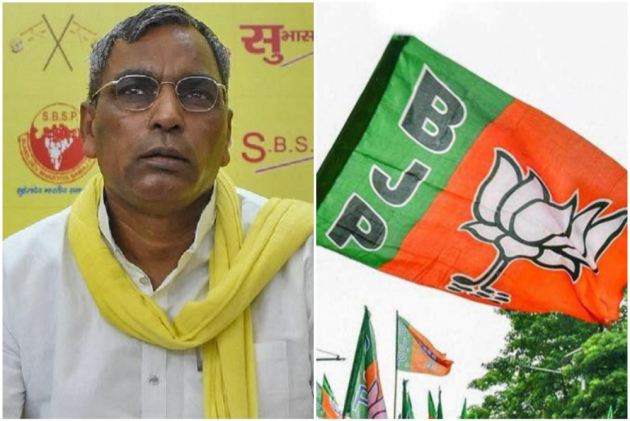 Days after finalising alliance with the Samajwadi Party (SP), Om Prakash Rajbhar, president of Suheldev Bhartiya Samaj Party (SBSP) said that his alliance has the support of the most backward and OBC community in Uttar Pradesh and that the BJP will be driven out of the state in the 2022 Assembly elections. Rajbhar, a former minister in the Yogi Adityanath-led Cabinet, broke the alliance with the BJP in 2019.

The leader spoke to Outlook Magazine about SBSP's poll aspirations in Uttar Pradesh and the need for inter-party alliances to beat the BJP.

Q: You recently entered into an alliance with Samajwadi Party (SP) recently. What prompted you to say that the BJP will be voted out of power in the 2022 Assembly polls?

A: In the 2017 Assembly election, BJP came to power with the help of SBSP. We have a vote share of up to 22 per cent in the Purvanchal region. This time, we have entered into an alliance with the Samajwadi party and my aim is to defeat the BJP. The most backward communities (MBC) and the OBC community in the state are with us. People are fed up with rising prices and corruption by the state government. The BJP government came to power by making false promises. They failed to handle the pandemic and the public is desperately seeking a change now. Though the Social Justice Committee report was finalised three years back, the Yogi government still hasn't implemented it. I resigned from the Cabinet for the same reason.

Q: A group of more than seven small parties have now announced an alliance with the BJP as a counter to your tie-up with SP. Your comment?

A: BJP is afraid of Rajbhar and that’s the reason they are trying to tie up with some unknown entities. In UP itself, there are around 1200 caste parties. The BJP has allied with some small parties, which wouldn’t even have a strength of 500 members. I challenge them to show their strength if they can.

Q: Many surveys have pointed out that the BJP enjoyed unstinted support of non-Yadav OBC and OBCs since 2014. BJP says that the support will continue in this election too. Your take?

A: I am not denying that non- Yadav OBC and OBCs voted for the BJP in the previous elections. The BJP wooed the backward community with false promises such as jobs, education and more. In the last five years, they have only polarised the society in the name of Hindu and Muslims. Backward community vote banks can make or mar a government in UP. They are the kingmakers and they are with Rajbhar today. The BJP has ditched us. There is going to be a storm, which will wipe the BJP out.

Q: BJP has the support of Sanjay Nishad of Nishad Party and Apna Dal (S), which has considerable influence in some regions...

A: People voted for Sanjay Nishad’s party as he promised reservation for the backward. He couldn’t fulfil the promise and now he also talks about Ram Mandir just like the BJP. Parties like Mukesh Sahni’s VIP also did the same. People have given them a direction but they have deviated from it. People have deserted them, which is obvious from their public meetings with empty chairs. How long can one cheat people?

Q: What is the future of 'Bhagidari Sankalp Morcha' which you have formed earlier along with Owaisi’s AIMIM and other small parties? None of the parties has stated their position on your alliance with SP.

A: I haven’t made any electoral alliance with Owaisi and others earlier. However, our efforts will continue to bring together all parties who want to fight the BJP. My party didn’t bargain for any seats with Akhilesh Yadav. Our only aim is to defeat the BJP. I want all parties to come together to fight the saffron brigade. I have been speaking to Shivpal Yadav and Chandrashekhar Azad too. They all should talk to Akhilesh. Akhilesh never said that he wouldn’t ally with Owaisi. He was always open to alliances with small parties. Small parties should be pragmatic about their ambitions and potential. It’s not possible for everyone to contest in 100 seats.

Q: There is going to be a multi-cornered fight with parties like AAP, BSP, SP, and Congress contesting against each other. Wouldn’t it benefit BJP?

A: In the case of AAP and Congress contesting separately, only BJP will suffer. Not for our alliance. People don’t consider BSP and Congress as a strong force to reckon with. Priyanka is making efforts in UP, but it won’t succeed. Every single person, regardless of caste, religion and class, wants change and they look up to Akhilesh Yadav. He will be the next Chief Minister.

Q: Have you reached any seat-sharing agreement with Akhilesh Yadav?

A: I am not worried about the number of seats for us. Our party has extended full-fledged support to the alliance to beat the BJP. That is the need of the hour. Akhilesh has agreed to all our demands. If he forms the next government, there will be free education up to the post-graduation level and medical treatment of the poor will be free. Police personnel will be posted in districts neighbouring their home districts.