Book Review: JP To BJP: Bihar After Lalu And Nitish By Santosh Singh

As a new government takes office in Bihar, the book JP to BJP: Bihar after Lalu and Nitish looks closely at the process of saffronisation that has taken place in this landscape. 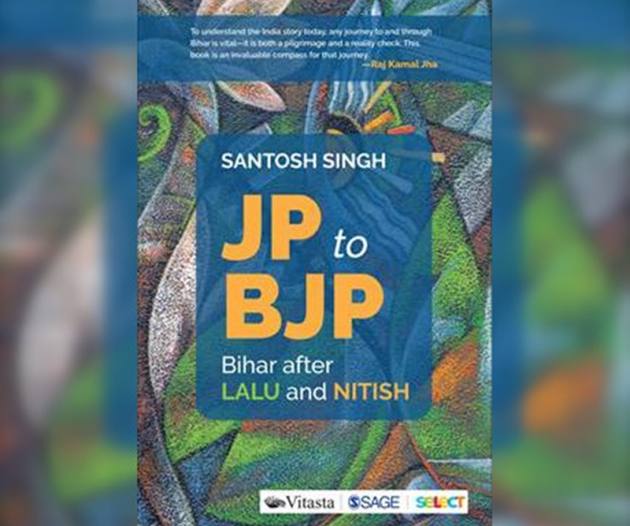 One day, Green asked Saffron: what keeps you so vibrant? Saffron smiled: a lot of Green inside me. Once upon a time, the Eastern Indian state of Bihar provided space for socialism to take centre stage. In this well-researched, skilfully argued book, Santosh Singh spells out the journey of Bihar’s politics through his lenses!

As a new government takes office in Bihar, the book JP to BJP: Bihar after Lalu and Nitish looks closely at the process of saffronisation that has taken place in this landscape, more marked than any other by milestones of political shifts and movements.

Author, journalist Santosh Singh tracks the important socialists on the national stage for the last 75 years; traces the rise and fall of socialist and coalition governments in Patna and New Delhi; defines for us the sifting sand of opportunistic politics and an invisible future.

This book is special in the sense that nothing of this sort has been written so far in Bihar. While it tells the story of formation of Triveni Sangh, a forum of three caste groups in Bihar, it also tells the story of Tejashwi Yadav. Karpoori Thakur has also been a less told story. The author has tried to weave in nuggets from his time.

This book gives answers to a lot of questions regarding the current state of politics, society and culture in Bihar. The book is a great source to look for references which could be used for exploring more and more about the rise and fall of "Socialism as theory and practice" in Bihar especially from the 1947s to till date.

The book answers many burning questions such as:

Why did the man who had sought to counter Narendra Modi’s “Congress-mukt Bharat” line with his vow of a “sangh-mukt Bharat” walk away from being the emerging nucleus of opposition politics?

Which top RJD leader did Prem Chand Gupta accompany to meet BJP leader Arun Jaitley in Delhi, and why?

This was an enlightening account of politics and politicians of Bihar. They were painted in an objective light with all their achievements and faults and aspirations.

The book aims to explore the story of conï¬ÂÂict, confusion, and co-existence of the Socialist green and the BJP’s saffron. It reveals the inside story of Nitish’s somersault, how Amit Shah had forced Nitish’s return to NDA by opening the Arun Jaitley channel, how Lalu spends his time in jail, and other such unknown details.Santosh Singh reveals the inside stories of Bihar in the book.

While the book dwells at length on these little-known stories of the three products of the JP Movement, Lalu, Nitish and Paswan, it recounts the parallel journey of the Socialists’ struggle against the Congress. The story of the Socialist Movement in India from the time of JP, Ram Manohar Lohia, Basavan Singh, Suraj Narayan Singh, Karpoori Thakur, Ramanand Tiwary, Kapildeo Singh, Lalu Prasad, to ï¬ÂÂnally Nitish Kumar.

Nitish’s three terms can be defined by three words for each: road, politics and energy, in that order. The Lalu Prasad-Rabri Devi regime can be defined in these terms: Mandalisation and secularisation of politics, Yadavisation over social empowerment, misrule, caste war and the fodder scam. Paswan, meanwhile, pursued “politics of the comfort zone”— his ideological position against Godhra and resignation from the AB Vajpayee cabinet had more to do with the rise of Nitish than any ideology. Santosh Singh writes in the chapter “The Full Circle”.

Now into his fourth term as chief minister, Nitish Kumar knows there is no longer any TINA (There is no alternative) factor operating in Bihar. There are at least four significant alternatives, Tejashwi his biggest challenger. Chirag Paswan could also be a future leader. So could Kanahiya or Prshant. And any of the umpteen under-fories who contested this poll. Not to discount the BJP CMs waiting in the wings. He added in the same chapter.

Of the three products of the JP Movement, Nitish is at the fag end of his career, Lalu has been ailing and Ram Vilas is no more. JP’s Movement has come full circle. The green of Socialism has started fading.

While in another chapter on Karpoori Thakur, the author writes, “As education minister, Karpoori took the landmark decision of removing English as a compulsory subject in Class 10 board examinations. Though he was quite good at English, he knew how passing in English was very tough for rural boys.” We know that Karpoori Thakur has also been a less told story.”

Santosh Singh writes profoundly in middle of the book about iconic leader Ram Vilas Paswan. “Paswan carried out bit rebellious nature of Kosi river and the calmness of Kareh. Paswan’s connection with two rivers had perhaps taught the art of fighting and tiding over challenges. He owed his leadership skill to challenging the geographical setting of his village.”

The author takes up a whole range of questions and conundrums of the politics of Bihar from the 1930s onward and attempts to piece together this puzzle. It further delves into details of Kanhaiya Kumar's Bihar plans and poll strategist Prashant Kishor’s plans for Bihar elections.

Author Santosh Singh writes, the book title is living up to current political situation with Bihar politics now becoming a battle between BJP versus the rest. With BJP having already done Arunachal Pradesh to JD (U), the alarm bells are ringing for Nitish Kumar. Just wait till UP elections in 2022, BJP will unfold its Bihar plans with more clarity. BJP's arrival is just a matter of time. The only thing to watch out for whether all socialist groups can come together to stop the saffron party's juggernaut. Tejashwi and Chirag are also leaders to watch out for. Kanhaiya Kumar and Prashant Kishor can also spring some surprises.

As pretty much clear from the title, the book describes the entire political journey of Bihar- The predominant Congress rule till its fall 1990, the JP movement, socialist rule under Karpoori Thakur, the rise of Lalu and the 15 years of Lalu-Rabri rule, the rise of Nitish, vernacularisation of politics by both Lalu and Nitish and the recent rise of BJP in Bihar.

Bihar politics is now entering an era that will make it bipolar. It is Saffron versus Socialists. Include the Left victories. While the Saffron will keep company of some smaller parties to stitch up a good social combination, Mukesh Sahani could be one leader to watch out for in the coming years. He would prove an asset to any combination he is attached with. His wavering loyalty is the only hindrance to his politics. On the other hand, Tejashwi will have to work towards building a good social combination — besides the Left parties and the Congress. Tejashwi knows Congress is the weak link of his alliance. He has a tough task ahead but he has surely shown signs of a mature leader. Bihar has crossed over the Nitish Kumar phase. Nitish might decorate the chair but he may not hold on to it for a long time. Santosh Singh mentioned in the book a chapter ‘The Churn:  Bihar after Lalu and Nitish’.

Santosh Singh deserves all the accolades for the meticulous research he has done to put together multiple references and gather anecdotes from the popular as well as the tainted political figures of Bihar.It deserves to be called in best political byline in mass print as it has been extremely satisfying and fulfilling to weave together the great Bihar story from Dr Srikrishna Singh to Nitish Kumar with a lot of contemporary elements.

It took me to the journey, and I almost knew the paths, but never looked at them like this. Important for anyone wishing to understand modern India, the book presents a new and lucid view of a state that will continue to influence the country's fortunes.

Book :JP to BJP: Bihar after Lalu and Nitish  By Santosh Singh

(Ashutosh Kumar Thakur is Bangalore-based management consultant, literary critic and advisor with Kalinga Literary Festival. He can be reached at ashutoshbthakur@gmail.com)