The chief minister said there is a place for dissent in democracy which must be there. 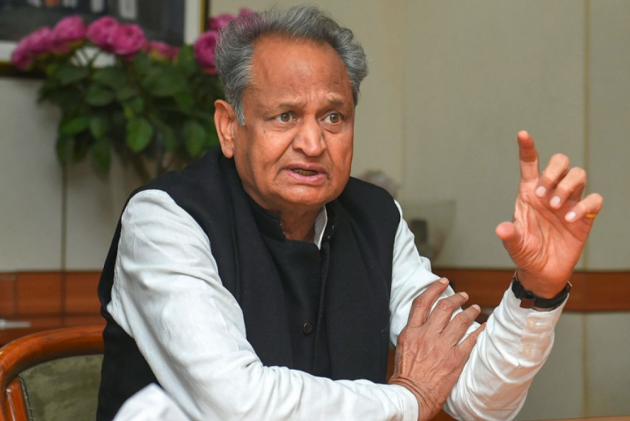 Saying there is place for dissent in democracy, Rajasthan Chief Minister Ashok Gehlot on Sunday accused the Centre of being stubborn to hear anyone else, including the Opposition.

"There is a place for dissent in a democracy. It must be there. When they were in the Opposition, they criticised us, leading to the resignations of the then railway minister, law minister and various chief ministers,” Gehlot told reporters after hoisting the Tricolour on Independence Day in Jaipur.

“They are such people who are determined to rule the country stubbornly without bothering to hear anyone," he added.

The chief minister’s remark prompted Rajasthan’s BJP president Satish Poonia to take a dig at Gehlot and other Congress leaders.

“Gehlot is the first chief minister who proudly says he did not venture out of his home during the Covid pandemic,” said Poonia.

In the year 2023, the people of Rajasthan will end this and “quarantine” Congress out of power, he asserted.

He said the emergency was the biggest struggle in this country after independence and everyone knows who imposed it, he added.

"They talk about democracy. Either they do not know the history or are deliberately ignoring it," Poonia said.

Earlier during the day, Independence Day was celebrated with much fervour in Rajasthan with Chief Minister Gehlot hoisting the flag at Jaipur’s Sawai Man Singh Stadium and taking the guard of honour.

While talking to reporters, Gehlot also accused Prime Minister Narendra Modi of being the “sole PM in the last 75 years who hesitates in taking the name of former PM Jawaharlal Nehru”.

"I regret that PM Modi feels shy of speaking even two words about the first PM. With these people having such an attitude, one can understand where will they take the country to," Gehlot said.

The chief minister also accused the Centre of keeping various democratic institutions and investigative agencies, including the judiciary, Income Tax Department, CBI and ED under its pressure and misusing them for political purposes.

“They start raids in states immediately before elections,” said Gehlot, adding raids by investigative agencies and electioneering by political parties have never happened together.

Earlier in a video message on the 75th Independence Day of the country, Gehlot said people should follow the spirit of the Constitution to keep the country united.

He said the spirit of unity in diversity should be imbibed by the new generation.

While greeting people, he recalled the sacrifices of leaders like Pandit Jawaharlal Nehru, Sardar Vallabhbhai Patel, Maulana Abul Kalam Azad under the leadership of Mahatma Gandhi.

“Former Prime Minister Indira Gandhi sacrificed her life to ensure that Khalistan is not formed. Similarly, former PM Rajiv Gandhi got martyred to ensure peace prevails in the subcontinent,” he added.

Rajasthan Congress president Govind Singh Dotasra also targeted the Centre, saying the BJP ruling the Centre and other states does not have any faith in democracy.

He said the autonomy of constitutional institutions is being infringed by the BJP governments in the Centre and various states.

He said those who express dissent are termed as anti-national.

“Farmers have been fighting for the last 10 months demanding the withdrawal of three agricultural laws but instead of finding a solution, the Central is adopting various tactics to suppress their movement,” he added.

He asserted that the Congress workers will “uproot these fascist forces” working against the values ??of the democracy.

Governor Kalraj Mishra also hoisted the Tricolour at Raj Bhavan here and took the guard of honour. (With PTI inputs)