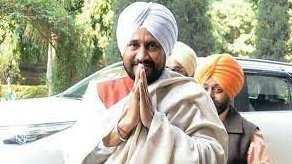 Charanjit Singh Channi has taken oath as 16th CM of Punjab. Along with Channi, two Deputy CMs Sukhjinder Singh Randhawa and OP Soni have also been sworn in. Rahul Gandhi participated in oath ceremony but former CM Captain Amarinder Singh stayed away from the ceremony.

Keeping eye on the coming 2022 assembly election Congress has played the Dalit card. With Channi as the Chief Minister, the party high command has balanced the caste equation by offering the post of Deputy CM to OP Soni, a Hindu and close aide of Captain Amrinder Singh and Sukhjinder Randhawa, a Jat Sikh from Navjot Sidhu camp. Sunil Jakhar is also learnt to have been offered the post, but he refused.

In the outgoing Congress government, OP Soni, MLA from Amritsar, a confidant of Capt Amarinder Singh, was the senior minister with medical education and reserch portfolio.  On the other hand Sukhjinder  Randhawa, MLA from Dera Baba Nanak(Gurdaspur) was in the CM race, from Navjot Sidhu camp. With this, the party high command has tried to balance caste cards as well as accommodate leaders close to Captain Amarinder and Sidhu camp.