We Can Fight UP Assembly Polls Without Aligning With SP Or BSP: Congress Leader Ajay Kumar Lallu 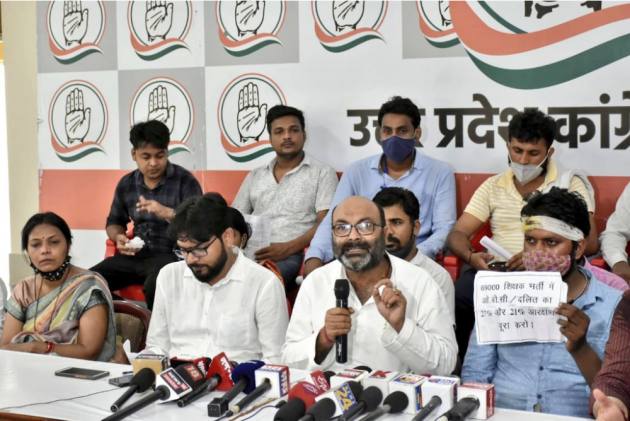 Days after the Samajwadi Party and the Bahujan Samaj Party ruled out forging any major alliances for the Uttar Pradesh Assembly polls, Congress state unit chief Ajay Kumar Lallu on Sunday expressed confidence that his party has the capacity to fight the elections without aligning with either of them and form the next government on its own.

He also said the Congress would fight the assembly polls in Uttar Pradesh next year under Priyanka Gandhi Vadra''s "dekh-rekh (supervision)", and that under her leadership, the party would make a comeback in the state after over three decades.

In an interview with PTI, Lallu said the Congress has emerged as the main challenger to the "oppressive" UP government and claimed that his party with just five legislators has proven to be a more effective opposition than the Samajwadi Party (SP) which has 49 MLAs in the 403-member assembly.

Faith In Congress Rising, Its Vote-Share Has Gone Up: UP Congress Chief

He said "winds of change" were blowing in the state and added, "Badlav ki aandhi hai, jiska naam Priyanka Gandhi hai (There is a storm of change and its name is Priyanka Gandhi)."

The UP Congress chief asserted that the Congress organisation has been strengthened at various levels in the state under Priyanka Gandhi''s leadership.

Pressed on whether Priyanka Gandhi would be the party's face in the run-up to the polls, Lallu said she is the state's in charge and the elections will be fought under her supervision.

"The people of Uttar Pradesh are looking at the Congress with hope. There is a lot of enthusiasm among the workers and under her (Priyanka Gandhi) leadership, the Congress government will be formed in UP," he said.

His remarks come at a time when the party has shifted gears for the assembly elections with the state unit organising zone-wise training camps of block presidents, district presidents and other office-bearers to prepare workers for the polls.

Congress general secretary Priyanka Gandhi is likely to visit several districts this month with an aim to enthuse the cadre and prepare the party for a pitched electoral battle with the ruling BJP.

Whether the party would fight the polls on its own or in alliance with the SP or the Bahujan Samaj Party (BSP), Lallu said the Congress will forge an alliance with issues of the people, farmers, poor, women and the oppressed.

The Congress will go to the people with this alliance and is confident they will bless it, he added.

On whether votes could get divided if the SP, the BSP and the Congress contest separately, Lallu said the people had given the opportunity to all the other political players in the state but they were not able to stay true to the faith shown by the people and now it was the Congress'' turn.

About SP and BSP leaders'' statements on the polls, he said it reflected frustration and disappointment as people have rejected them and are standing with the Congress.

On many political pundits not considering the Congress the main challenger to the BJP in UP and the party''s poor showing in the panchayat polls, he alleged that an "oppressive" BJP government is in power and said if any party is raising its voice against the Yogi Adityanath dispensation on the streets, it is the Congress which has emerged as a "strong opposition".

"Be it for farmers, youth or poor in rural areas, Congress has raised its voice on issues such as unemployment, law and order situation, saving lives during the Covid pandemic, on deaths due to spurious liquor, jungle raj and other problems," he said.

Asserting that Congress workers had taken the fight against the state government to the streets, he claimed that over 1 lakh party workers were have been and cases filed against thousands of them at different points in time.

"I myself have been detained more than 80 times in a year, over 40-50 cases were filed and I went to jail four times," Lallu said.

Talking about the Congress'' performance in the panchayat elections, Lallu said 271 of the party-backed candidates were elected, 571 came second while 711 were third.

The Congress got 50 lakh votes in Lok Sabha polls and in the assembly elections, it got 51 lakh votes, but in zila panchayat polls, it got 1,52,00,000 votes, he said, alleging that the SP only "grabbed headlines" by putting their name on winning candidates despite losing out.

"There is frustration and disappointment in BJP and SP, the Congress with its determination is going to make a comeback in UP under Priyanka Gandhi''s leadership. We have full faith in the people," he said, stressing that Congress was the BJP''s main challenger in the polls.

Pointing out that the party has been strengthened at various levels under Priyanka Gandhi, Lallu said a capable organisation was in place with the appointment of zila committees, block presidents, and setting up of nyaya panchayats and gram sabha units.

"We have 840 block presidents, 8,145 nyay panchayat presidents and in 59,000 villages, we have gram sabha units. We are strengthening booths, training programmes are going on. In light of these developments and on the basis of raising people''s issues, we will definitely make a comeback in UP," he said.

Claiming that the three farm laws were a big issue in the state, Lallu said the Congress stood against the laws, and farmers would support the party.