Farmer Protests: Congress Says Govt Can Talk To Taliban But Not Farmers

Congress chief spokesperson Randeep Surjewala alleged the government at the centre, as well as the one led by Khattar, were instigating the farmers and conspiring to pit them against the police. 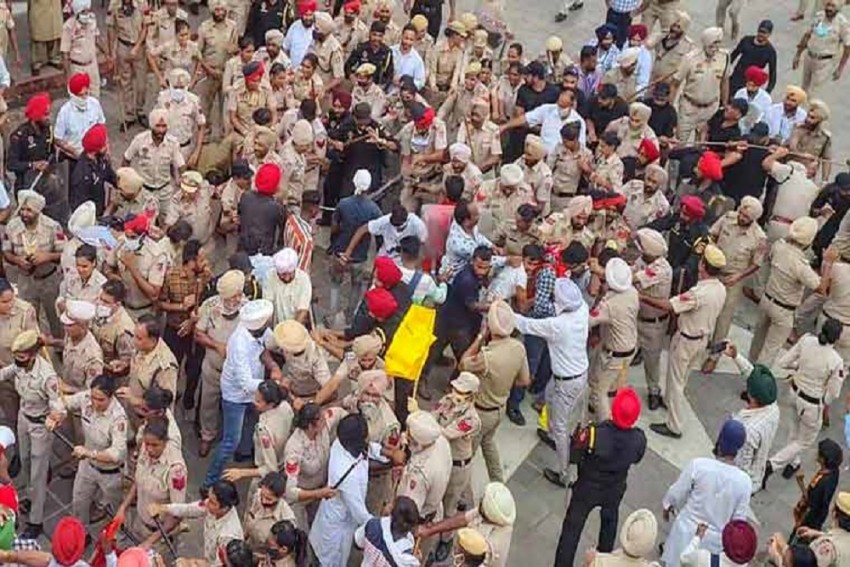 Even as farmers leaders and protesters gathered at Haryana's Karnal on Tuesday to gherao the mini-secretariat in protest against the August 28 lathicharge on farmers, the Congress slammed the BJP government and said that while it was ready to hold talks with the Taliban in Doha, it was unable to hold talks with farmers.

In wake of the protests by farmer unions in Karnal, the Congress also demanded the resignation of Haryana Chief Minister Manohar Lal Khattar for allegedly using force against protesing farmers.

Congress chief spokesperson Randeep Surjewala alleged the government at the centre as well as the one led by Khattar were instigating the farmers and conspiring to pit them against the police.

"The Congress demands that if the BJP-JJP government in Haryana cannot talk to farmers, then chief minister Manohar Lal Khattar should resign. He and deputy chief minister Dushyant Chautala have no right to occupy their positions," he told reporters.

“The Congress also demands that Prime Minister Narendra Modi should invite the protesting farmers by stopping all his work and himself talk to them. He should shed his ego and arrogance and after talking to farmers, he should withdraw the three 'black' farm laws today itself," the Congress leader said.

In Karnal, thousands of farmers are currently face to face with the armed police and water cannon is being used against them, he said.

“What kind of arrogance of power is this that the prime minister does not want to talk to farmers? Modi ji, this arrogance of power is not greater than democracy. The power of democracy is through people's power. The world's longest peaceful Gandhian protest by farmers is at Delhi's borders for the last 10 months demanding justice," Surjewala said.

The Congress leader also demanded that a case of murder be lodged over the death of Haryana farmer Sushil Kajal after the lathicharge on farmers on August 28.

He also demanded compensation for the next of kin of the dead farmer.

A large number of farmers on Tuesday squatted at the gates of the district headquarters here, locked in a showdown with Haryana's BJP-led government over a police lathi-charge last month.

The gherao began in the evening, several hours after farmers from Haryana and neighbouring states reached Karnal’s New Anaj Mandi for a mahapanchayat, riding tractors and motorcycles.

Marching on foot from the mahapanchayat venue to the mini-secretariat five kilometres away, farmers faced a water cannon as they neared the complex. They jumped some barricades, but there was no other serious confrontation with police along the way.