Belying government claims, the farmers support base has been expanding given the support from larger number of people from all walks of life and of all ages. 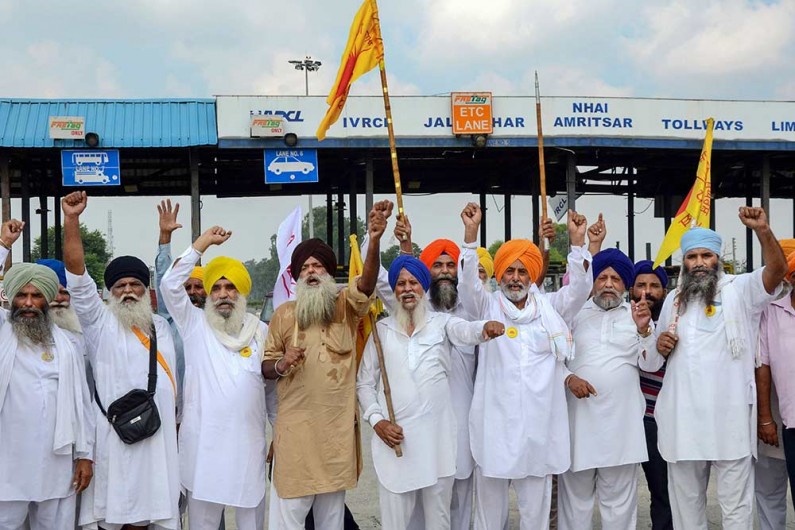 Lauding the response to Bharat Bandh called by Samyukta Kisan Morcha (SKM) a grand and historic success, farmer leaders said it reestablished the fact that the protest against the three new farm legislations and the demand for making minimum support price mandatory is not limited to one state or region.

“The response to SKM call was heartening given that its main slogan was ‘Corporate Forces Hands Off Agriculture and Modi-Shah Quit Power’,” said Hannan Mollah, general secretary of All India Kisan Sabha (AIKS), which joined hands with hundreds of farmer group under the umbrella of SKM.

Mollah points out that reports received are indicative of the emerging pan India character of the farmers' struggle. “The visuals indicate huge participation of women, elders, youth and even children in the massive protest actions all across the country,” said Mollah. Even in the BJP ruled states of UP, Gujarat and Tripura the impact of the Bandh is reported to have been huge given the near total closure of shops and commercial establishments.

Despite farmers' resolve to keep Bharat Bandh free of any violence, reports from West Bengal and Tripura claim that police had to take action against some activists.

As per reports, the response to the Bandh call was massive in Punjab, Haryana, Kerala, Tripura, Tamil Nadu, Bihar, Telangana, Andhra Pradesh, Rajasthan, Odisha, and West Bengal. In Maharashtra, Uttar Pradesh, Uttarakhand, Madhya Pradesh, Jharkhand, Assam, Karnataka, Himachal Pradesh, Manipur and Gujarat the support was more in the rural areas. In many places, farmers resorted to Rail Roko and Rasta Roko, though there were no clashes or damage to public property.

Apart from farmers, there was reportedly large-scale participation of trade unions, several opposition political parties, agricultural workers, women, youth, students, traders and people from all other walks of life.

“The political direction of today’s Bharat Bandh is that the last few years of joint struggles of worker-peasant unity has paved the way ‘towards building larger people’s united front against corporate exploitation especially in agriculture, industry and services,” stated Mollah.

The Bharat Bandh from 6 am to 4 pm, marked the anniversary of the day when President Ram Nath Kovind “assented to and brought into force the 3 anti-farmer black laws last year,” the SKM said in a statement.

The SKM statement points out that during the past ten long months of peaceful, determined, hopeful and patient protests by farmers more than 605 farmers have been martyred for joining the agitation.

Marking the birth anniversary of Shaheed Bhagat Singh on 28 September, SKM has invited youth and students supporting the farmers’ movement to join in large numbers at the morchas planned to mark the day.

The momentum has been building up over the last few months with Kisan Mahapanchayats held in Panipat, Haryana, and Hathras district in Uttar Pradesh on Sunday witnessing an impressive turnout.

Meanwhile the Kabaddi tournament organised by SKM is continuing at Singhu Border, with much enthusiasm and active participation of locals.