According to Kanika's father Rajiv Kapoor, she attended a few parties between March 13 and 15. Nearly 300 people attended these parties. 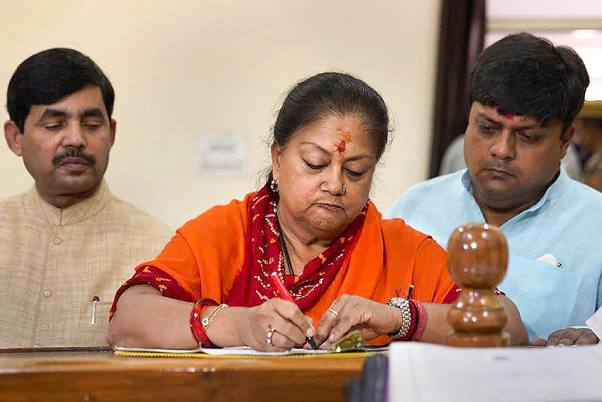 Bollywood singer Kanika Kapoor on  Friday announced that she has tested positive for COVID-19, setting off a chain reaction with political leaders like Vasundhara Raje, her MP son Dushyant Singh and parliamentarians Derek O'Brien and Anupriya Patel, who came in contact with her directly or indirectly, going into self-quarantine as a precautionary measure.

While Raje and her son had recently attended a dinner party in Lucknow where Kanika was also a guest, O'Brien said he sat beside Singh at a Parliament meeting on Wednesday for two hours.

Patel, a leader of Apna Dal, said she was present at an event on Thursday which was also attended by Singh.

Goliath The Germ: Where Does India Stand In Humankind's War Against Corona

Coronavirus Outbreak: Trying Times Such As This Will Test Our Nation's Character

District Magistrate Abhishek Prakash ordered closure of Taj Mahal hotel in Lucknow till further orders. Though the official order gave no reason, sources said Kanika had attended a party at the hotel.

According to Kanika's father Rajiv Kapoor, she attended a few parties between March 13 and 15. Nearly 300 people attended these parties.

The "Baby Doll" singer, who became the first Bollywood celebrity to test positive for coronavirus, landed in Lucknow from the United Kingdom and was admitted to a city hospital after she showed signs of flu, reports said.

In a statement posted on Instagram, Kanika said she developed signs of flu only in the last four days.

Soon after, Raje, O'Brien and Patel took to Twitter to announce they have gone into self-quarantine as a precautionary measure.

"I got myself tested and it came positive for Covid-19. My family and I are in complete quarantine now and following medical advice on how to move forward. Contact mapping of people I have been in touch with is underway as well.

"I was scanned at the airport as per normal procedure 10 days ago when I came back home, the symptoms have developed only four days ago," Kanika said in her statement.

The 41-year-old singer urged people to practice self-isolation and get tested if one has the signs.

"I am feeling ok, like a normal flu and a mild fever, however we need to be sensible citizens at this time and think of all around us. We can get through this without panic only if we listen to the experts and our local, state and central government directives. Wishing everyone good health," she added.

Rajiv said his daughter is in isolation at Sanjay Gandhi Postgraduate Institute of Medical Sciences, Lucknow.

"She came to Lucknow on March 11 after spending a day in Mumbai. She was normal when she arrived. In the past two days she had fever and cough and we, as a precaution, got her tested. Today morning we came to know that she is low density positive," Rajiv, who along with four others is in self-isolation at his Lucknow residence, said over phone.

When asked, he said Kanika had attended three parties on March 13, 14 and 15.

"They were small parties. In all 250-300 persons had attended all three parties," he added.

Rajiv and the other family members will undergo testing on Friday evening.

He denied reports that Kanika dodged airport authorities and said she had cleared screening in Mumbai.

"The passenger travelled from London to Mumbai by an Air India flight on March 10. There is no direct flight from London to Lucknow. It is expected that as per Government of India orders screening would have been done at Mumbai. As per the directives, passenger screening is done for international flights only," Lucknow airport authorities said.

Raje said she had attended the dinner party with her son and his in-laws in Lucknow and Kanika was among the guests.

"As a precaution, my son and I have immediately self-quarantined and we are following all directions," the former Rajasthan chief minister said in a tweet in Hindi.

O'Brien said he has isolated himself at his Delhi residence.

"Am on self-isolation and following all protocol, as I was sitting right next to MP Dushyant for two hours at a #Parliament meeting on March 18," he tweeted.

Earlier, the Trinamool Congress (TMC) leader had demanded that the ongoing Budget session of Parliament be deferred in view of the coronavirus outbreak.

Patel said, "I attended an event yesterday. Fellow MP Shri Dushyant Singh was also present at the event. As a precautionary measure, I am self-isolating. I will follow the directions issued by the government."

A total of 223 coronavirus cases have been reported in the country so far and more than 6,700 people who have come in contact with them are under surveillance, according to the Union Health Ministry.