The police crackdown on a group at Bastara toll plaza in Karnal, Haryana, on Saturday resulted in 10 protestors getting seriously injured. 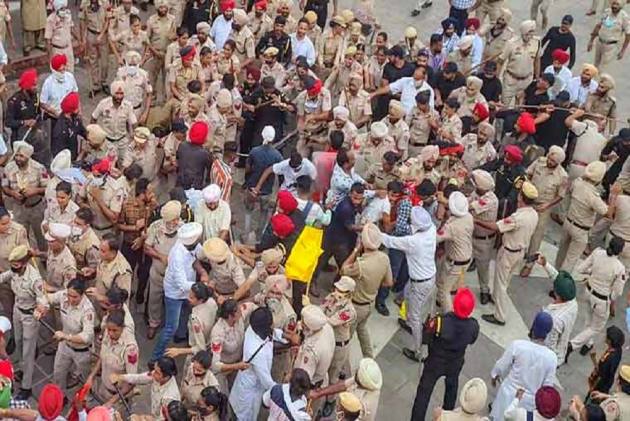 Ongoing farmers’ protest against three new farm legislations seems unlikely to abate in the near future despite the police crackdown on a group at Bastara toll plaza in Karnal, Haryana, on Saturday resulting in 10 protestors getting seriously injured. Plans for future course of action within Haryana and in other states are being taken up by farmer leaders on Sunday at a mahapanchayat being held at Nuh in Mewat district followed by another meeting on Monday in Karnal.

“The unprovoked attack on Saturday resulting in 10 farmers being injured is expected to further intensify our protest plans,” says Hannan Mollah, a leader of the All Indian Kisan Sabha. “Our attempt has always been to peacefully raise farmers’ issues including the need to make MSP mandatory as a floor price. But if we are attacked, as has been seen often in Haryana under state government orders, we will have to defend ourselves.”

Stating that Saturday’s attack on farmers, who had sought permission from local authorities to stage a peaceful protest and submit a memorandum of demands, “is expected to further intensify the anger of farmers who have been seeking a positive government response for the last nine months,” says Ashutosh Mishra, spokesperson of Jai Kisan Andolan.

Farmer leaders, who earlier this week held a two-day national convention with participation from 500 groups spread across the country, state that they are not going to backtrack on plans to make the movement a pan-India agitation. They however fear that the protest proposed on September 5 at Muzaffarnagar in Uttar Pradesh may see another crackdown “as the central and state government are clearly wary of the political fallout of the farmers’ movement,” states Mollah.