I Have Been Successful In Ending The Politics Of Vendetta: Himachal CM Jai Ram Thakur

Will return and create history in 2022, something that has never happened before in Himachal: Jai Ram Thakur. 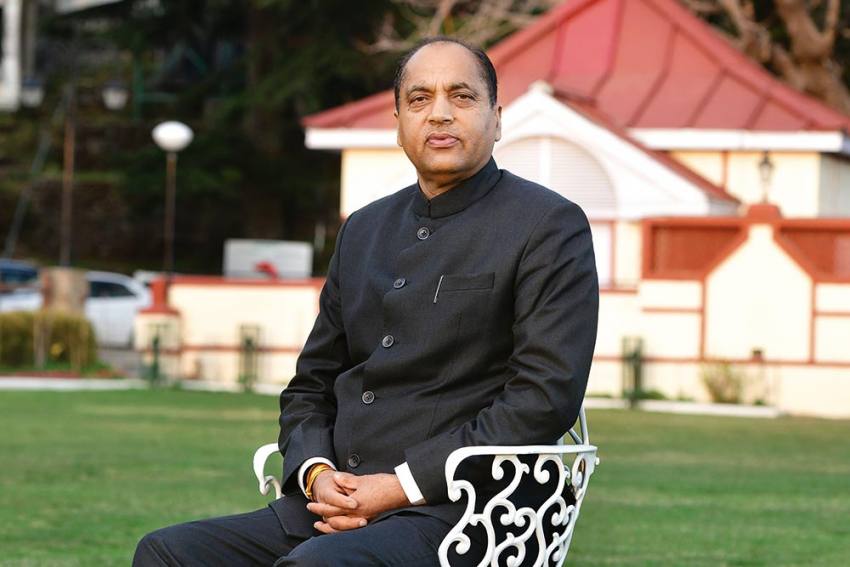 Five-time legislator Jai Ram Thakur was not the BJP’s chief ministerial candidate in the Assembly polls, which the party won riding a pro-Narendra Modi wave-making promises like “double-engine” growth, women’s safety and end of “mafia raj”. Thakur, 55, became the BJP’s choice for leading the new government. An impressive Lok Sabha win in 2019 from all four seats, battling Covid-19 and balancing development with political aspirations, the first-time chief minister completes three years in power on December 27.

Ashwani Sharma of Outlook spoke to Jai Ram Thakur in Shimla at his official residence “Oak-Over” in Shimla.

Q) How do you feel completing 3 years as a first-time chief minister?

How Are You Doing? Himachal CMO Dials 1,000 Covid Patients In 72 Hours

We Hope That The Covid Infection Chain Will Be Broken By Dec 15: Himachal CM Jai Ram Thakur

Three years have been quite satisfying and eventful. We have given a government totally committed to the public cause, ensuring all-round development free from corruption. We have looked after the welfare of all the vulnerable sections. Focused on creation of new jobs and took many new initiatives. Unfortunately, this Covid-19 disrupted our targets to a great extent. Nevertheless, we tried to move ahead on all priority sectors and did not allow the pandemic to derail our overall resolve.

Q) What is the biggest single achievement you feel proud about?

I really feel proud of changing the political culture. I have been successful in ending the politics of vendetta. Every time after power changed hands, cases were filed against political opponents. Our own earlier governments did that though the Congress was far ahead of us brazenly. A lot of valuable time of the government, its resources and energy used to be wasted in contesting these cases in the courts. The state exchequer used to be drained spending crores of rupees to hire the country's top lawyers and to meet other costs. I have closed this chapter forever. It's a single biggest achievement you can say.

Q) The Congress has squarely blamed the government for mishandling Covid-19 situation. Your comment?

It’s very sad and unfortunate to note how Congress tried to make Covid-19 a political issue. The whole world is fighting the novel coronavirus. It's not India alone or our state grappling with its spread. But the Congress feels it’s only the BJP’s creation. Why can’t they see the challenges posed to the lives of the people, our economy and future development? Because, the Congress has no issue against the BJP government, it believes Covid is the easiest thing to raise noise and play politics with it. This will not deter the government resolve to pursue its away forward. The BJP government is on a strong footing and enjoys the full backing of the Centre.

Q)  Why a sudden Covid surge when it has subsided in the rest of India?

You see, some states had an early surge and few went through its peak later. Luckily, Himachal Pradesh showed up as a better-managed state initially. It only saw a high surge in November-December 2020. The reasons have been attributed to large weddings and mass celebrations during the festival season. The people became careless and complacent. We took strong steps like imposing night curfew in four hotspot districts, restricting social gatherings upto 50 people and scaled-down other activities. The number of fresh cases has come down to 200-250 as compared to 900 to 980 every day. The fatality rate has also come down. Soon, we will be in a much better position.

I will be very honest to admit that it has really impacted us badly. Of three years, my one year is lost, targets got disrupted and projects got delayed. We have suffered an economic loss to the tune of Rs 30,000 crore. The tourism sector, trade and industry have suffered a big blow. Yet, we have been able to revive economic activities and put many projects back on track. New schemes worth several hundred crores of rupees have been launched. The projects worth Rs 100 to Rs 150 crore have also been started in every Assembly constituency.

Q) Has it hit your plans on industrial investments?

The state is pushing forward its plan for Rs 10,000-crore bulk drug park – three of these proposed by the Centre in different states. I have recently met Prime Minister Narendra Modi and the Union minister for chemicals explaining why Himachal Pradesh needs this project. Two other big proposals – electrical and electronic products-manufacturing hub and medical equipment-manufacturing hubs have also been submitted to the Centre. I feel the bulk drug park alone will be the game-changer for the state.

Q) How about the global investors’ initiative launched by PM Modi a year back?

Covid -19 as I said has its impact on several innovative plans. We had signed MoUs worth Rs 92,000 crore for new investments. The first ground-breaking ceremony was held on December 27, 2019, in Shimla for projects worth Rs 13,000 crore. We have second lot of projects worth Rs 10,000 waiting.

Q) Do you feel the double-engine slogan has really worked?

It is working very well. Prime Minister Narendra Modi treats Himachal Pradesh as his second home. We have got Rs 950 crore worth annual funding from the Centre under the Finance Commission and an additional share of taxes and recently Rs 450 crore interest-free loan for 40-year repayment. The Atal Rohtang Tunnel project of Rs 32,000 crore has heralded a new economic era not alone for Lahaul-Spiti but the entire state. Prime Minister Modi came for its inauguration despite not moving out of New Delhi during the lockdown. This shows his love for Himachal Pradesh ND its development.

Q) What's the final mission you or party has charted out in the run-up to the 2022 Assembly polls?

We don't work for the polls when they are nearing. In 2019, we won all four Lok Sabha seats with a record margin and highest vote percentage. We also won two bypolls. Now, we are all set for the panchayat polls which the BJP will sweep. You will see in the year 2022, we will create history returning to power in succession for the second term – a thing that never happened before in Himachal Pradesh. I am very confident about busting the myth that the incumbent government return to power here.

I feel my efforts to improve air connectivity and railway network have not moved as fast as I would have liked. Himachal Pradesh is the only state which primarily dependent on the roads. The new national highways projects sanctioned by the Centre have also not taken off so far because of Covid 19 and the lockdown. It will be a major priority in the next two years and even after.