In A First, CPI(M) To Observe Independence Day By Hoisting Flags From Every Party Office

The tricolour will flutter along with the red flag of the party, which will be seen for the first time on August 15 atop CPI(M) offices. 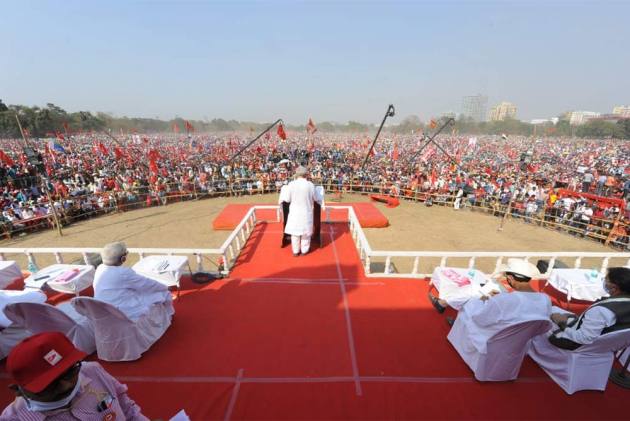 In a first, the Communist Party of India (Marxist) is set to celebrate India's Independence Day in a grand manner on August 15. To mark the event, a national Tricolour will be hoisted in every party office.

The development took place more than seven decades after the undivided Communist Party of India (CPI) raised the slogan "Ye Azadi Jhutha Hain" (This freedom is false). The CPI(M) came into being following a split in the CPI in 1964.

"It has been decided that the Tricolour would be hoisted at every party office on the occasion of 75th Independence day," CPI(M) Central Committee member Sujan Chakraborty said.
Chakraborty, also a senior functionary of the party's West Bengal state committee, however, rejected the contention that the party is observing the day for the first time saying that it was celebrated earlier also in a different manner.

J&K: Lal Chowk Lit Up Ahead Of 75th Independence Day

"We usually observe the Independence Day by holding discussions on issues and dangers faced by the country by fascist forces, by communal forces. This time the day will be held in a bigger way. Seventy-fifth or 100th year don't come every time," he told PTI.

The Tricolour will flutter along with the red flag of the party, which will be seen for the first time on August 15 atop CPI(M) offices, another party leader said.

The decision to observe the day was made after the central committee of the CPI(M), which assumed the role of principal Left party in the country after the split in the undivided CPI, put its seal of approval to the proposal of the West Bengal committee at a virtual meeting in which state members attended the deliberations from here.

The move came in the wake of the poor performance of the CPI(M) in the 2019 Lok Sabha and 2021 assembly polls in West Bengal, which was blamed by political observers as the party's growing disconnect with the electorate.

The decision also assumes significance as the Marxist party had been accused of jettisoning nationalist values and being more sympathetic to its international counterparts in China, Cuba and Vietnam in the past.

The party had been charged with being soft to China during the India-China War in 1962.
The undivided CPI, led by patriarchs such as Jyoti Basu, Bhupesh Gupta and others had coined the slogan "Ye Azadi Jhutha Hain" after Independence, arguing that it will only help the capitalists but not the proletariat.

During the 34-year rule of the CPI(M)-led Left Front in West Bengal, opposition parties charged it with organising protests over happenings in Cuba neglecting issues faced by the people of the state.

The BJP, Congress and the Trinamool Congress observe Independence Day in a big way had previously alleged that the communist party is less national and more international in its approach and had no contribution to the freedom movement. The charge, however, had always been denied by the communists.