Chirag Paswan might have been ditched both by the BJP and the five MPs of his party at the moment, but the doors of immense possibilities in the future remain ajar for him in politics. 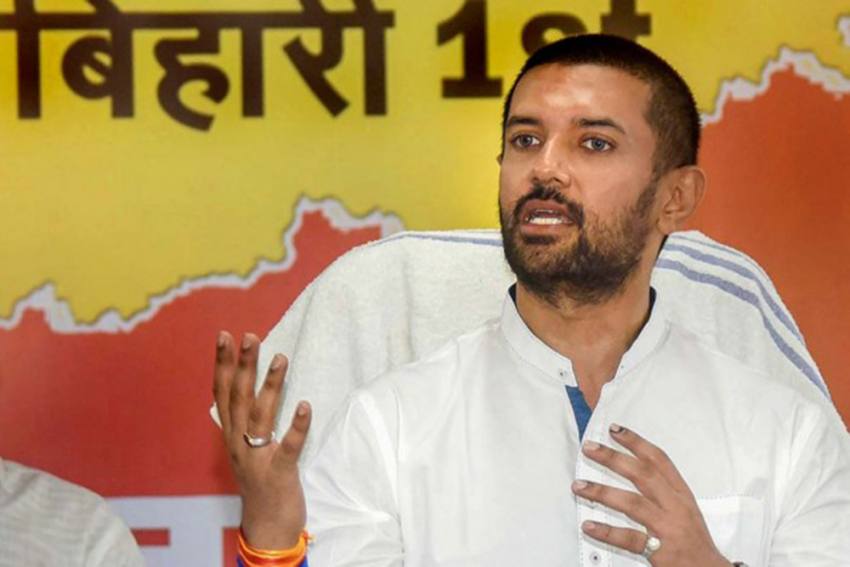 More than a month after facing an overnight coup staged by the party MPs led by none other than his uncle Pashupati Kumar Paras, LJP’s beleaguered president Chirag Paswan is in no hurry to stitch an alliance with the Rashtriya Janata Dal despite receiving many a feeler from the emissaries of Lalu Prasad Yadav.

Ever since Chirag was upstaged by the five Lok Sabha MPs of LJP, including his uncle, who claimed to belong to the ‘real party’ founded by late Ram Vilas Paswan, the RJD has been sending overt and covert overtures to the 38-year-old MP from Jamui to join hands with it in their united fight against the Nitish Kumar-led NDA in Bihar.

Last week, former Bihar minister and senior RJD leader Shyam Rajak met Chirag at his Delhi and is believed to have conveyed a message in this regard on Lalu’s behalf. Rajak had gone to Chirag's 12, Janpath bungalow after his meeting with Lalu. Though Rajak insists that he had called on Chirag to pay tributes to his father, who had done so much in his lifetime for the upliftment of the Dalits, it was more than obvious that the RJD wanted to lure the young LJP leader to join forces with it.

Rajak, however, says that anybody who believes in the philosophy of JP and Lohia is welcome to join the anti-NDA front. But Chirag is holding his cards too close to its chest. “It is not the right time to discuss it,” he said when he was asked about the possibility of his alliance with the RJD in near future during his ongoing second leg of Ashirwad Yatra in Bihar.

Chirag apparently has a reason or two to bide his time. One, no election, either parliamentary or the state assembly is going to be held in the next few years. The next parliamentary election is not slated before April-May, 2024 while the next Bihar Vidhan Sabha polls are due in October-November 2025. He, therefore, has enough time to rebuild his party and assess his support among his constituents at the ground level.

Chirag also apparently does not want to close all lines of communications with the BJP by stitching up an early alliance with the RJD despite the recent induction of his uncle in the Narendra Modi cabinet on the LJP quota, which upset him. Although he has already expressed exception to it and also spoken against the BJP’s population policy, he has refrained from going the whole hog in hitting out at the saffron party in general or Modi in particular.

He knows it well that the political situation may not remain the same, especially in Bihar by the time the next elections are held. Though he talks about the possibility of a mid-term poll in the state in the near future, he might like to keep all his options open.

In November 2020 elections in Bihar, LJP had got 5.66 per cent of the total votes polled, with about 25 lakh votes from the 137 constituencies that it had contested. He knows that he might have better bargaining power if he waits for the next elections.

If the BJP continues to remain an ally with Nitish Kumar’s Janata Dal-United and the Paras-led breakaway faction of LJP till then, he will always have the option to align with the RJD anytime. But if the BJP’s alliance with Nitish falls and Paras is found to be unequal to the task in proving himself to be the real inheritor of the late Paswan’s political legacy in Bihar, Chirag will have more than one option to explore.

He might have been ditched both by the BJP and the five MPs of his party at the moment, but the doors of immense possibilities in the future remain ajar for him in politics.