Over 1,800 people, including a large number of Beijing-based diplomats, Chinese and members of the Indian diaspora, took part in the cultural fest organised by the Indian Embassy in Beijing. 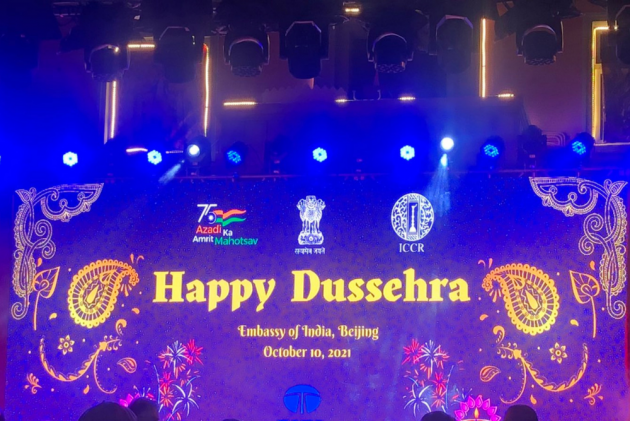 Even as India-China talks regarding easing of tensions along the LAC in the Eastern Ladakh region failed to bear fruit, both countries together celebrated the Indian festival of Dussehra in Beijing.

The sprawling lawn of the India House in Beijing turned into a noisy market on Sunday as families of Indian diplomats and a large number of Indian diaspora took up 28 makeshift stalls put up by the embassy to sell a wide variety of Indian artefacts, carpets and ethnic and fusion food.

Over 1,800 people, including a large number of Beijing-based diplomats, Chinese and members of the Indian diaspora, took part in the cultural fest organised by the Indian Embassy to honour the Hindu festival. The festival is set to be celebrated on October 15 this year.

Indo-China Border Issue Should Not Be Linked With Bilateral Ties: China

Proceeds of the homemade candles, a stall put up by the embassy’s Spouses Club, which attracted a big crowd, would go to charities, Dolly Misri, wife of Indian Ambassador Vikram Misri said.

Beijing-based diplomatic corps, officials of Chinese think tanks and members of the Indian diaspora also attended the special cultural performances, including a skit on Ramayana scripted and directed Drashan Naik, fireworks display and setting of the image of Ravana on fire.