Air Vice Marshal R.G.K. Kapoor, at a media briefing, showed radar images to assert that an F-16 of the Pakistan Air Force (PAF) was shot down by the Indian Air Force. 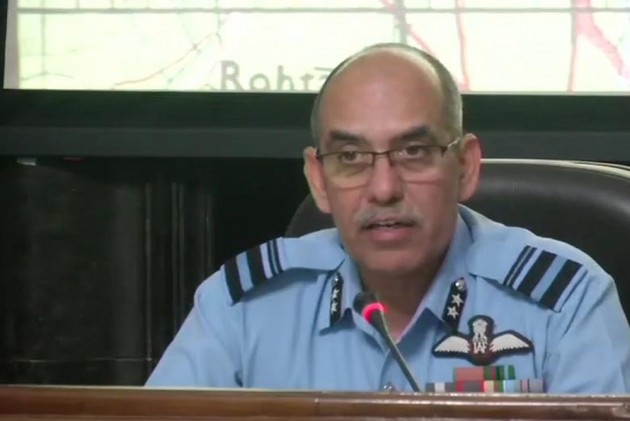 The Indian Air Force on Monday reiterated that it shot down an F-16 jet of Pakistan Air Force during the February 27 aerial combat and showed radar images of the engagement to assert that it has "irrefutable evidence" of downing the enemy jet.

The IAF held a media briefing at the Defence Ministry where several slides of graphic captures from airborne warning and control system (AWACS) were shown to the media.

"The IAF has irrefutable evidence of not only the fact that F-16 was used by Pakistan Air Force on February 27, but also that an IAF Mig 21 Bison shot down a Pakistan Air Force F-16," Air Vice Marshal R G Kapoor said in a statement.

No F16 Used To Shoot Down Indian Aircraft: Pakistan Army

He, however, did not take any question on the issue.

On Friday, the IAF had asserted that it shot down an F-16 fighter jet of Pakistan during the dogfight, following a report in a leading US news magazine which contradicted India's contention.

"There is no doubt that two aircraft went down in the aerial engagement on February 27, one of which was a Bison of IAF while the other was an F-16 of PAF conclusively identified by its electronic signature and radio transcripts," the IAF official said.

He said the IAF has more credible information and evidence that is clearly indicative of the fact that the PAF has lost one F-16 in the air action on February 27. "However, due to security and confidentiality concerns, we are restricting the information being shared in public domain."

Last week, leading American magazine 'Foreign Policy' reported that a US count of the F-16s with Pakistan has found that none of them are missing, contradicting India's claim that one of its fighter jets shot down a Pakistani F-16 during the aerial dogfight on February 27.

In the report, the magazine said two senior US defense officials with direct knowledge of the situation told it that American personnel recently counted Islamabad's F-16s and found none of the planes missing.

The report contradicted the claim made by New Delhi that the IAF shot down an F-16 jet of Pakistan.

The Government has been maintaining that Indian Air Force pilot Abhinandan Varthaman had engaged with one of the Pakistani F-16s and shot it down before his Mig-21 Bison was downed.

Varthaman was captured by Pakistan and was released after spending nearly 60 hours in Pakistani custody.

The Indian Air Force had on February 28 displayed pieces of an AMRAAM missile, fired by a Pakistani F-16, as evidence to "conclusively" prove that Pakistan deployed the US-manufactured fighter jets during an aerial raid targeting Indian military installations in Kashmir.

Indian Air Force has been forcefully asserting that it shot down a Pakistani F-16 during the dogfight. Pakistan has denied that it lost any F-16 jet during the aerial combat.