Prime Minister Narendra Modi took to Twitter to wish the bravehearts of the Indo-Tibetan Border Police (ITBP) force that keeps watch over the Line Of Actual Control with China. 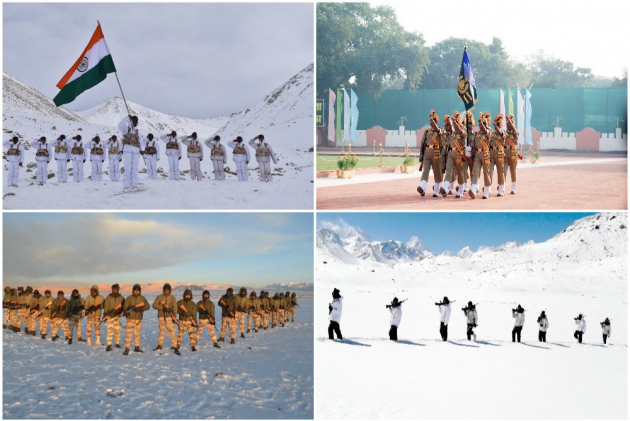 Marking the 60th Raising Day celebrations of the Indo-Tibetan Border Police (ITBP) force,  gallantry medals were awarded to 20 personnel of the force guarding the India-China LAC. The soldiers were awarded for their bravery displayed during the violent clashes and ongoing military standoff between the two countries in the eastern Ladakh region in May-June 2020.

The awards had previously been announced on the eve of Independence Day on August 14 this year.

Minister of State for Home Affairs Nityanand Rai pinned the medals on the chests of the personnel and handed them certificates at a ceremony in Greater Noida, Uttar Pradesh.

The central paramilitary is deployed shoulder-to-shoulder with the Army as part of its primary mandate to guard the 3,488 km-long icy Line of Actual Control (LAC).

Taking to Twitter, Prime Minister Narendra Modi also hailed the soldiers of the ITBD for their continued bravery in the face of hostilities.

From dense forests in Arunachal Pradesh to the icy heights of the Himalayas, our @ITBP_official Himveers have answered the nation’s call with utmost dedication. Their humanitarian work during times of disasters is noteworthy. Greetings to all ITBP personnel on their Raising Day. pic.twitter.com/nmhLRjnMOD

Out of the 20, eight personnel have been awarded the police medal for gallantry (PMG) for their gallant act, meticulous planning and tactical insightfulness and for defending the motherland in Galwan Nalla on June 15 last year, a spokesperson for the force said.

It had said that in eastern Ladakh, the ITBP troops not only effectively used shields to protect themselves but also responded fiercely to Chinese PLA advancing troops and brought the situation under control during "fierce" face offs and skirmishes.

"With highest order of professional skills, ITBP troops fought shoulder-to-shoulder and also brought the injured (Army) troops to the rear.

"Even when the ITBP troops fought the whole night, they received minimum casualties by giving befitting reply to the stone pelters of the PLA," the force said in their citation.

At certain places, it said, they gave a "determined" standoff for about 17-20 hours throughout the intervening night (June 15-16) in extremely challenging conditions.

"Due to the high-altitude training and survival experience of the force at the icy Himalayan deployments, ITBP troops kept the PLA troops at bay and due to the all out and befitting response of ITBP troops at several fronts, many areas were safeguarded.

"The ITBP troops showed highest level of devotion, courage, determination, utter disregard to personal safety even in injured condition and exhibited great professional skills in the face of violent physical scuffle with the PLA," it had said.

Twenty Army soldiers were killed during these clashes while China has claimed the casualty figures on its side to be five, which is widely believed to be much higher.

Three other ITBP personnel were also decorated with the PMG for displaying courage, grit and determination in anti-Naxal operations in Chhattisgarh.

Deputy Inspector General (veterinary) Sudhakar Natarajan was also decorated with the police medal for meritorious service during the event for rendering exceptional service in the animal transport wing of the force, the lifeline for ensuring rations and logistics to its mountainous border deployments.

Natarajan, who joined the ITBP in 1992, is credited with introducing the first batch of Belgian Malinois infantry patrol dogs in the ITBP, which was followed by all other Central Armed Police Forces (CAPF).

The about 90,000 personnel strong ITBP was raised on this day in 1962 in the aftermath of the Chinese aggression.

Wishes poured in on social media to mark the occasion.