Union Education Minister Dharmendra Pradhan, who attended the launch event virtually, hailed Karnataka for setting an example for other States to follow. 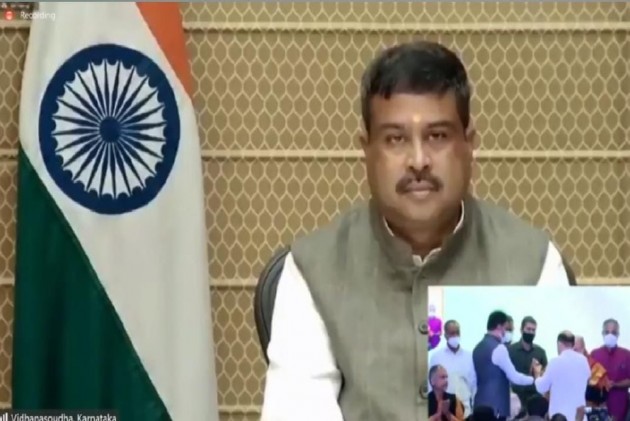 Karnataka has become the first state in the country to implement the National Education Policy.

The state launched the NEP on Monday thereby becoming the first State in the country to do so.

Union Education Minister Dharmendra Pradhan, who attended the launch event virtually, hailed Karnataka for setting an example for other States to follow. The minister said the NEP is meant for the age group of three to 23.

'It Will Be Disastrous If New Education Policy Is Implemented’: MA Baby

Chief Minister Basavaraj S Bommai said the State would launch a policy of digitisation and research and development that could help implement the new National Education Policy (NEP), which aims at bringing fundamental changes in the education system.

"If we want NEP to succeed, we must make it reach every child across the State. Digitisation is important to education for which we will bring a new digitisation policy," he said at the launch of the NEP.

He said the broadband networking would be made available in every village for which he sought the assistance of technocrats and academics.

As envisioned by Hon. PM Shri @narendramodi ji, the NEP brings a paradigm shift in catering to 21st-century aspirations and also provides a roadmap to establish India as a knowledge economy as well as help in creation of global citizens. #NEPKarnataka pic.twitter.com/tQB7hGfdma

The Chief Minister further said a Primary and Secondary Education Council would be launched from the district headquarters town of Kalaburagi.

Bommai said there are about 180 R&D centres in Bengaluru but lamented the lack of any connect with students.

"We will have a new R&D policy. If not in Karnataka where else can this policy be formulated? This (R&D policy) is as important as the NEP," the Chief Minister said.

Bommai said the R&D policy would reach every village, school and university.

Stating that the universities have a pivotal role in implementing the R&D policy, the Chief Minister said he wanted every Kannadiga to be knowledgeable.

He hailed Prime Minister Narendra Modi for aiming to bring fundamental changes in education through NEP.

"Many people have ruled the country but only a few dared to make fundamental changes in the system, which could make the nation a world leader. NEP shows the foresightedness of our Prime Minister to liberate the education system from silos," Bommai said

The Chief Minister said the existing education system drags a child into the push and pull of life and never allows to explore his or her talent in painting, singing, athletics and other areas.

"But the NEP liberates from the structural policy," Bommai said.

Conceding that the implementation of the NEP would be a challenge as bringing in new changes has always been difficult, Bommai said he was optimistic that NEP would be successfully implemented in Karnataka.