The accused were arrested for allegedly promoting the Islamic State's ideology and instigating protests against the Citizenship (Amendment) Act, the NIA had alleged. 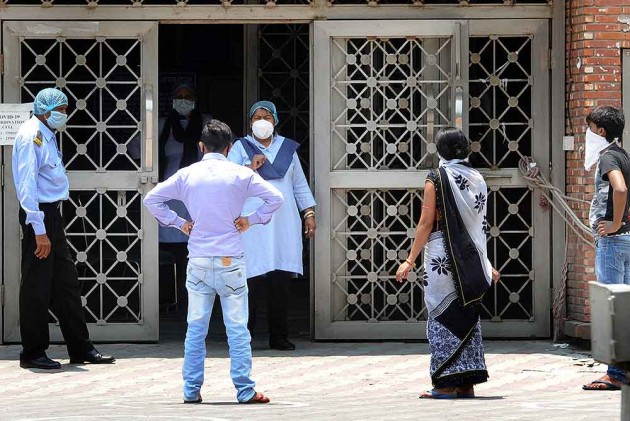 A Kashmiri woman, who was arrested earlier this year for allegedly planning a terror attack in the country during anti-CAA protests in New Delhi, has tested positive for COVID-19 while in the custody of National Investigation Agency(NIA).

The court sent her husband Jahanzaib Sami and another accused Abdul Basith to judicial custody in the case after the agency did not seek their further remand.

Her lawyer advocate M S Khan has filed an application seeking interim bail for two months for her, saying "Delhi is struggling to cope up with the rising number of coronavirus positive cases" and that there is "lack of proper treatment facilities in government hospitals".

The accused were arrested for allegedly promoting the Islamic State's ideology and instigating protests against the Citizenship (Amendment) Act, the agency had alleged.

The COVID-19 tests of accused persons were conducted on June 6 on the directions of the court, while their 10-day custodial interrogation ended on Sunday.

"The report of COVID-19 test of accused persons namely Jahanzaib Sami and Mohd Abdullah Basith is negative but report of Hina Bashir Beigh is found positive," the NIA informed the court.

In the bail application, which is likely to come up for hearing in the coming days, advocate Khan said, "Delhi is struggling to cope up with the rising number of corona positive cases that have gone up to 27,000 as of now and due to lack of proper treatment facilities in government hospitals, which has also been highlighted in the media, the Delhi government has been compelled to issue a list of 56 private hospitals for corona treatment."

The three accused, allegedly having links with Islamic State Khorasan Province (ISKP), were arrested by the special cell of Delhi Police in March and later sent to judicial custody on March 23.

Basith was already lodged in jail in another case being probed by the NIA when the Delhi Police arrested him in the present matter.

The case was later transferred to the NIA, which lodged a case on March 20 under sections 120-B (criminal conspiracy), 124-A (sedition) and 153-A (provocation for causing riot) of IPC and sections 13 (punishment for unlawful activities) and 20 (being member of terrorist gang or organisation) of stringent Unlawful Activities (Prevention) Act (UAPA).

The NIA later approached a special court in Delhi seeking custodial interrogation of three accused, which was allowed for 10 days by the judge on May 20, with a direction to Tihar jail authorities to hand over their custody to NIA "after conducting their COVID-19 test and ensure that its found negative".

The NIA took their remand on May 29 after the test result had come negative. The custody ended on Sunday.

The agency said the accused were following the ideology of ISIS and planning for a terror strike in India and also recruiting cadres for ISKP.

"In one audio message Abdul Basith said to Jahanzaib to motivate and prepare some guys who may be used for lone wolf attack and kill the people through a truck or lorry by running them over on people," the Delhi Police had earlier said.

Police said that the trio was in contact with Abu Ushman al Kashmiri, who is the head of Indian affairs of ISKP.