After the final list of the NRC was published in Assam on Saturday, reactions poured in from several political leaders who expressed their concerns and even called for re-verification. 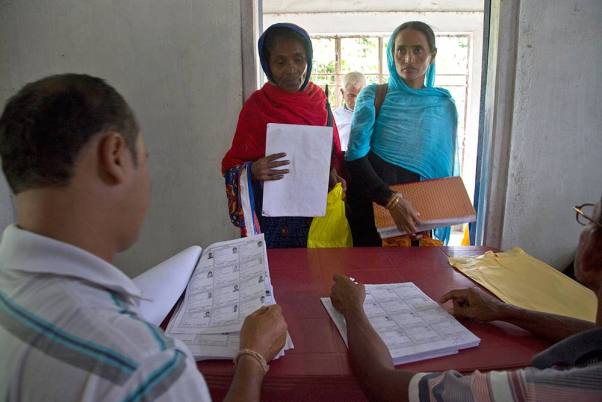 The final list of National Register of Citizens (NRC) in Assam was published on Saturday, which excluded over 19 lakh people. Over three crore people have been found eligible for inclusion in the final NRC, Prateek Hajela, the State Coordinator of the NRC, said in an official statement. After the final list was published, reactions poured in from several political leaders who voiced concerns with some calling for re-verification.

Assam Finance Minister Himanta Biswa Sarma pointed out the "flaws" of the list and said the final version of the National Register of Citizens did not contain names of many persons who had come to India from Bangladesh before 1971, the cut off period for updation.

In a series of tweets, the senior BJP leader said that there was a “manipulation of the legacy data”.

Over 1.9 Million People Left Out Of Final NRC, State Govt 'No Longer Believes In National Document'

"Names of many Indian citizens who migrated from Bangladesh as refugees prior to 1971 have not been included in the NRC because authorities refused to accept refugee certificates," Sarma wrote on Twitter.  "Many names got included because of manipulation of legacy data as alleged by many," he added.

Sarma, who is the Convenor of the NDA's North-East wing NEDA, added that the Supreme Court should permit the re-verification of at least 20 per cent names in border districts and 10 per cent in the remaining state as had been previously requested by the State and Central governments. "I reiterate that as requested by Central and State governments at least 20% re-verification (bordering districts) and 10% re-verification(remaining districts) should be allowed by Honble Apex court for a correct and fair NRC," he tweeted.

Ramen Deka, the BJP MP from Mangaldoi, said a large number of illegal Muslim migrants from Bangladesh had made it to the list, while many indigenous people were not named.

"We are not at all happy. A large number of Bangladeshi Muslims have been enlisted, while genuine Indian citizens have been left out. The exercise was conducted under the supervision of the Supreme Court but the document is not up to the mark," he said.

Former Chief Minister of Assam and Congress leader Tarun Gogoi told NDTV that the Congress party would oppose BJP’s attempts to "communalise" the NRC and added that the BJP would have to give an explanation to the people about what went wrong.

"I have my own doubts that the BJP through Citizen Amendment Bill can bring a bill wherein they can try to give citizenship to all non-Muslims, which will again be a violation of Right to Equality," he said.

Congress MP Shashi Tharoor, in an oblique reference to the publication of the final NRC list, evoked Rabindranath Tagore and said that there is a “thin line between nationalism and xenophobia..”

"There is a thin line between nationalism and xenophobia —besides, hatred of the foreigner could later turn into a hatred of Indians different from oneself. -- Rabindranath Tagore. The prescience of a great man! #NRC,” Tharoor wrote on Twitter.