The SC has concluded hearing a joint plea by NCP-Congress-Shiv Sena seeking an immediate floor test. 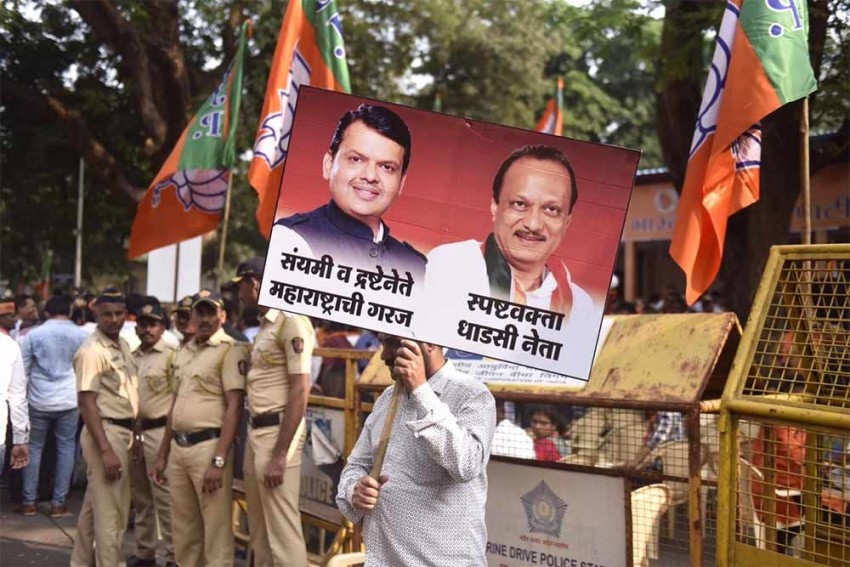 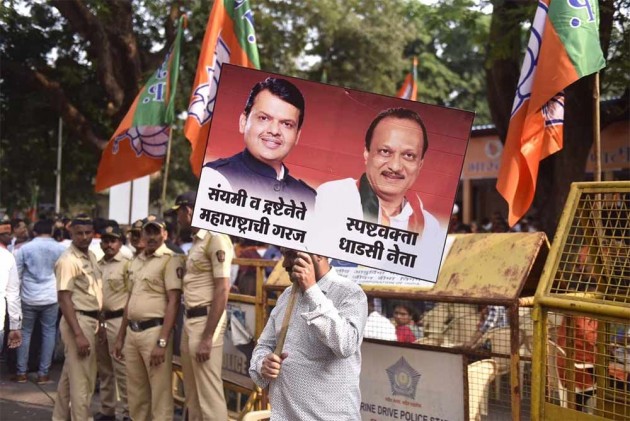 The Supreme Court on Sunday asked Solicitor General Tushar Mehta to place before it on Monday morning the letters of Maharashtra Governor recommending revocation of President's rule in the state and inviting Devendra Fadnavis to form the government by 10:30 am tomorrow. Mehta was also asked to produce the letters of support from MLAs.

In the special hearing on a holiday, the apex court also issued notices to the Centre, Fadnavis and Deputy chief minister Ajit Pawar on the petition filed by Shiv Sena-NCP-Congress combine against the Maharashtra government's decision to swear in Fadnavis as chief minister.

Get all the live updates here:

4:42 PM:  Shiv Sena chief Uddhav Thackeray, along with Aditya Thackeray, arrives at Lalit Hotel where his party MLAs are lodged.

4:40 PM: Shiv Sena chief Uddhav Thackeray, while addressing the NCP MLAs said, "Do not worry, this relationship will go long, our alliance will go a long way", ANI reported.

4:20 PM: Shiv Sena leader and MLA Aaditya Thackeray, son of party chief Uddhav Thackeray, shared a tweet by the NCP saying #MahaStrength. The tweet was on the meeting between key Shiv Sena and NCP leaders in the presence of MLAs from the Sharad Pawar-led party.

4:14 PM: Deputy CM Ajit Pawar thanked PM Narendra Modi for his wished over government formation in Maharashtra and assured him of a stable government in the state.

3:50 PM: Rajasthan Chief Minister Ashok Gehlot said, "Maharashtra Governor should tender his resignation on moral grounds. His actions were hand in hand with BJP, which is unfortunate."

3:40 PM: NCP chief Sharad Pawar and Shiv Sena president Uddhav Thackeray met at the Renaissance Hotel where the NCP legislators have been staying. The Sena chief was joined by senior party leaders and son Aaditya Thackeray.

2:45 PM: Shiv Sena chief Uddhav Thackeray arrives at Renaissance Hotel, in Mumbai, to meet NCP MLAs. NCP chief Sharad Pawar is also present at the hotel and has held a meeting with his legislators.

1:55 PM:  Ashish Shelar of BJP says, "All lawyers of Congress-NCP-Shiv Sena were pleading to Supreme Court that floor test needs to be done today. After seeing the proceeding and the order, it has been established that the Supreme Court hasn't come to that conclusion, their request has been rejected."

1:15 PM: BJP says that Maharashtra Chief Minister Devendra Fadnavis will prove his government's majority in the state Assembly, claiming he has the support of more than 170 MLAs. On the other hand, Sena's Sanjay Raut says the triparty alliance of Sena-NCP-Cong has the support of 165 MLAs.

1:10 PM: After the Supreme Court's order, Congress spokesperson Randeep Surjewala says, "Our demand is simple -- whoever has the majority, can form the government. The BJP is running away from the floor test. The moment the floor test is ordered, our majority will be proven."

13:07 PM: Congress leader Anand Sharma says, "The midnight coup was unprecedented. There was no grave emergency between midnight and the day. It shows the intent. SC should go into all aspects otherwise it'll become a practice."

12:30 PM: Supreme Court has summoned the letters of support from MLAs and the order of the Governor inviting Devendra Fadnavis to take oath as chief minister. The documents have to be submitted by 10:30 am tomorrow.

12:28 PM: "Governor's decision to invite political party is not open to judicial review as it is his discretionary power," Rohatgi tells SC. "Even orders of Governor have not been filed, this is plea without any docs and annexures," he said arguing against ordering of floor test.

12:27 PM: SC says no one is disputing that floor test is the best method to show majority.

12:26 PM:  "Floor test is Constitutional obligation, no formality is needed and it can be ordered," says Singhvi and refers to judgements in various cases including dismissal of Uttarakhand Cong govt, saying "floor test is ultimate test".

12:21 PM: Mukul Rohatgi, appearing for Maharashtra BJP says, "There is no need for the court to pass order today. There was no illegality in Governor decision. Court should not pass order to fix the date of the floor test. The three parties here have no fundamental rights."

"There are some things that are with the President which are not even open to judicial intervention," argues Rohatgi.

12:15 PM: Advocates appearing for Shiv Sena and the NCP-Congress combine argue for BJP to take an immediate floor test.

12:14 PM: Abhishek Manu Singhvi, appearing for NCP-Congress on the plea filed by the two parties along with Shiv Sena, argues, "How can it be possible that who took oath yesterday claiming majority, is today shying away from floor test?"

"Supreme Court has consistently ordered floor tests to be held immediately whether it’s in UP in 1998 or Karnataka in 2018. May the best person win, let’s have the composite floor today or tomorrow," he added.

12:10 PM: "54 is the total strength of NCP, 41 MLAs wrote to Maha Governor saying Ajit Pawar has been removed as its leader," Singhvi tells SC, adding that the 41 NCP lawmakers are with Sharad Pawar.

12:07 PM: "Yesterday NCP decided that Ajit Pawar is not the legislative party leader. How can he continue as the Deputy Chief Minister if he doesn't have the strength of his own party?" Adv. Singhvi argues.

12:05 PM: Abhishek Manu Singhvi, appearing for NCP and Congress, says in Supreme Court, "How come Ajit Pawar becomes the Deputy CM with the support of only around 42-43 seats? It is the murder of democracy."

"When the announcement was made at 7 pm that we are staking claim to form govt and Uddhav Thackeray will lead it, couldn’t the Governor wait?" he asked.

12:02 PM: Solicitor General Tushar Mehta, appearing for Centre, says NCP-Congress-Shiv Sena combine does not have fundamental right to form govt and their plea can't be allowed.

12:00 PM: Senior advocate Mukul Rohatgi appears in SC for some BJP and independent MLAs, says this plea should have been filed in Bombay High Court.

"We have seen this in Karnataka also. If they (BJP) have the majority, then let them show their majority," he said.

11:50 AM: "Devendra Fadnavis, Ajit Pawar were sworn in a bizarre manner. The Governor was acting under direct instructions of Delhi," says Adv. Kapil Sibal.

"The Court should order the floor test today itself. If BJP has majority, let them prove in assembly. If they don’t, let us stake the claim," he said.

11:40 AM: Senior advocate Kapil Sibal appearing for Shiv Sena starts submission in SC with an apology to judges for troubling them on Sunday.

11:05 AM: "Ajit Pawar has committed a mistake. Efforts are being made since yesterday to make him understand, he has not given any indication so far. It will be better if he realises his mistake," said NCP leader Nawab Malik.

"By this evening all the MLAs of our party will come back to us. Fadnavis ji will not be able to prove majority on the floor of the House," Malik said.

10:50 AM: "Maharashtra governor allowed the new government to be formed on basis of bogus documents," said Sena's Sanjay Raut, adding that November 30 was given as the deadline to prove majority in Maharashtra.

10: 45 AM:  As many as165 MLAs are with the Shiv Sena, NCP, and Congress combine, says Sena leader Sanjay Raut. Maharashtra has a 288-member Assembly.

Earlier today, the NCP claimed they had the support of all their MLAs barring five, whom they could not contact.

10:20 AM: The BJP objects to the removal of Ajit Pawar as leader of the NCP legislature party, says it is "invalid".

10:00 AM: The Supreme Court will on Sunday morning hear a joint plea by Shiv Sena, NCP and Congress challenging the decision of Maharashtra Governor Bhagat Singh Koshyari to invite BJP's Devendra Fadnavis to form the government in the state. They have also demanded an immediate floor test to avoid "further horse-trading".