Abdullah said the BJP-led central government carried out the aerial strike as the Prime Minister had 'failed' in delivering on his promises made during the last general elections in the country. 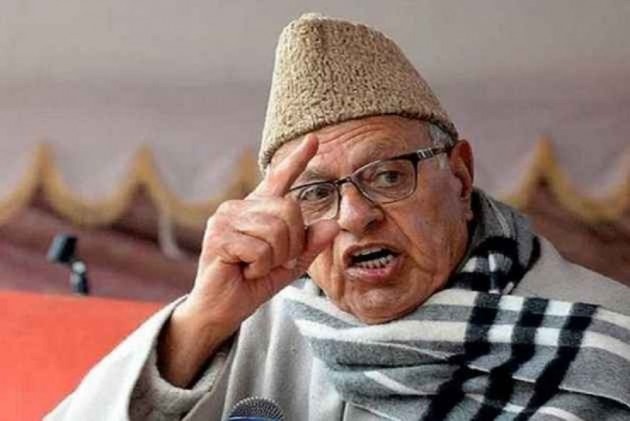 National Conference president Farooq Abdullah has accused Prime Minister Narendra Modi-led government of "lying" to the nation on the Balakot air strike and shooting down of a Pakistani F-16 in the aerial dogfight between the IAF and the PAF.

Abdullah, who is contesting the Lok Sabha elections from the Srinagar constituency, said the BJP-led central government carried out the aerial strike as the Prime Minister had "failed" in delivering on his promises made during the last general elections in the country.

"He (Modi) had promised that Rs 15 lakh will be put in your accounts, did you get Rs 15 lakh? When he failed in all these things, his head was hanging whenever I used to see him in Parliament during the last few days as he realised that his power is gone.

"At that time, some MPs would say that he would do something...Attack Pakistan so that everyone feels that Hanuman ji has come. What did he do? For a few seconds, he sent three planes to the border which is known as Balakot and dropped bombs there," Abdullah said addressing an election rally in the Fakir Gujri area in Srinagar Friday.

The former chief minister said the government claimed that a number of terrorists were killed but there is no clarity.

"Some people said 500 were killed and some others even said 700 were killed. Here if one person is killed, the whole world comes to know. Would no one know if 300 were killed?" he asked.

On the report in a US journal that the US count claims no F-16 jet was shot down by IAF's MiG-21 Bison, Abdullah asked the prime minister why he was "lying" to the people of the country.

"He (Modi) said we shot down their (Pakistani) fighter plane F-16. Now, the US has come up saying all the Pakistani F-16s are counted. Not one has been shot down. There must be some basis for even lies, Modi ji. How long will you lie to people. And did you win (the battle)? Has Pakistan disappeared? Why are you lying? Do you think the Hindus will buy into all this?" he said.

Hoping that the BJP will not return to power at the Centre, Abdullah said whichever party comes to power "they will definitely talk to Pakistan and Jammu & Kashmir will be the first priority".

"We can't bear living like this ...That deaths take place everyday," he said.

About the government's decision to ban public traffic on Jammu and Srinagar highway two days every week, Abdullah said the road was not even closed during Kargil war.

"Are we at war today that the government has closed the highway for two days a week? Are we slaves? Is Jammu and Kashmir a colony? We were never slaves and will never be. We have said goodbye to kings in 1947. Don't threaten us, you are not our god," he said.