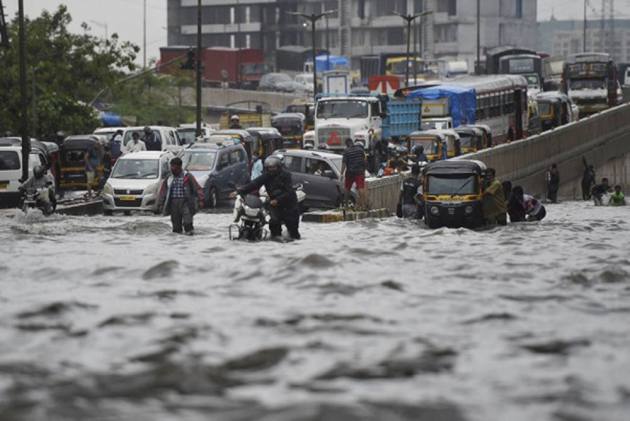 The India Meteorological Department (IMD) has downgraded its earlier red alert of “extremely heavy rain” issued for Mumbai and its suburbs as it predicted only “heavy” or “very heavy rainfall” in the region on Sunday and Monday.

This development comes in the backdrop of incessant rains lashing parts of Maharashtra on Saturday. However, according to experts the cyclonic circulation in the Arabian Sea weakened late on Saturday resulting in weakening of the weather system.

Heavy rains, coupled with thunderstorm and strong winds, lashed Mumbai and its suburbs on Saturday, leading to disruption of train and bus services as tracks and roads got waterlogged at several locations, officials said.

By evening, the rains subsided and the train traffic had returned to normal. The Met department in the evening downgraded its earlier warning of "extremely heavy rain" for the next two days.

A Central Railway spokesperson said the suburban train services between Dadar and Kurla stations on the main line were suspended for some time after the water rose above the track level.

A Brihanmumbai Electric Supply and Transport (BEST) official said that several of its buses had to be diverted due to water-logging at some points.

The Central Railway official said, "Due to more than 61.21 mm rainfall in one hour, coupled with a high tide of 4.34 metres at 1.32 pm and closing of Mithi river floodgates, water level rose on track between Kurla and Sion.”

The suburban services on the Harbour line also slowed down due to water-logging near Chunabhatti station.

The operations of local trains on other sections of the main line and other routes, including the Thane-Vashi line, were normal, he added. A Western Railway spokesperson said the suburban services on its corridors ran without any disruption.