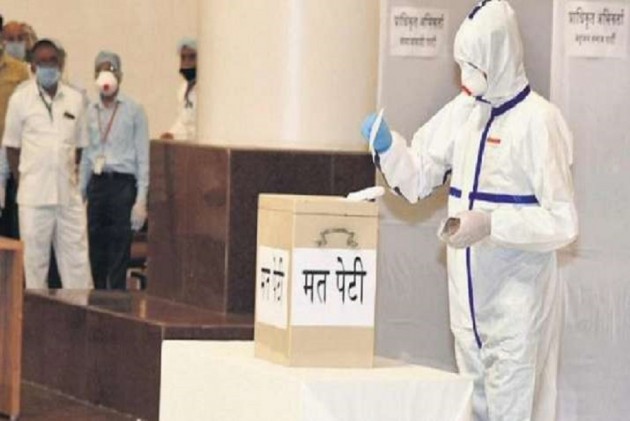 Nearly 160 tonnes of biomedical waste in the form of gloves, face masks and empty sanitiser bottles used by polling personnel and voters was generated during the Bihar assembly polls held amid the Covid-19 pandemic, poll authorities in the state have said.

Officials also said that they relied on the same inexpensive but effective technology used to track EVMs, to ensure that the waste reached public health centres for its onward journey to the incinerator.

To ensure the safety of voters, polling staff and security personnel in the first-ever polls held during the pandemic, the Election Commission had procured 18 lakh face shields, 70 lakh face masks, 5.4 lakh single-use rubber gloves. The EC had also procured 7.21 crore ''one hand'' single-use polythene gloves for voters to press the EVM button and sign the register at the polling stations along with 29 lakh hand sanitiser bottles.

As per the guidelines issued by the Election Commission and poll authorities in Bihar, the polling stations were sanitised once a day before the election and thrice on voting day.
The office of the Chief Electoral Officer of Bihar had sought the help of the state health department to decide on "Covid-19 safety material" for the three-phase elections. The safety material which included face masks, face shields, gloves and personal sanitiser bottles were put in a bag meant for a polling party of six persons. "They were also trained to properly dispose the safety material," Bihar Chief Electoral Officer H R Srinivas told PTI. He said roughly, 160 tonnes of biomedical waste was generated.

All districts have a biomedical waste (BMW) disposal agency. "The challenge was the agency would lift BMW from health centres and hospitals but not lift waste from polling stations. The districts then appointed BMW workers," Srinivas said. On polling day, the workers placed two yellow-coloured dustbins in each polling station for disposal of used masks, gloves and sanitiser bottles, he added.

Responding to a question on how the vehicles with biomedical waste were tracked given the health hazard involved, Srinivas said at such a notice it was not possible to get each vehicle fitted with a GPS device.

“It (GPS device) is extremely costly and is of little use after the elections. Electronic voting machines have to be tracked when they are transported. For that purpose, poll authorities use "Election Tracking Enabled System" or Ele-Traces, an application developed by NIC. There is zero expenditure involved. It is a beautiful app... Two people (per vehicle) were asked to download the app and they were tracked," the Bihar CEO explained.