‘Never Imagined Village Boy Like Me Would...’: President Kovind At Birthplace

This is the first time the president is visiting his village after taking over his present assignment. 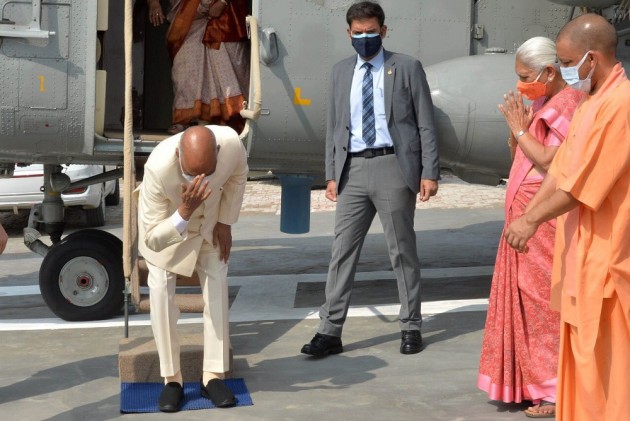 President of India Ram Nath Kovind on Sunday made an emotional speech at his birthplace at the Paraunkh village in Kanpur Dehat district of Uttar Pradesh.

Addressing a gathering at the village, the President said he had never imagined that an ordinary village boy like him would have the honour of occupying the highest post in the country and thanked the people of his birth place for this.

This is the first time the president is visiting his village after taking over his present assignment. Though he desired to visit the place earlier, plans could not materialise because of the pandemic, an official statement had earlier said.

The Rashtrapati Bhavan tweeted that in a rare emotional gesture, after landing at the helipad near his village, Kovind bowed and touched the soil to pay obeisance to the land of his birth.

"I had never imagined, even in my dreams, that an ordinary village boy like me would have the honour of occupying the highest post in the country. Our democratic system made this possible," Kovind said.

"Wherever I have reached today, the credit goes to the soil of this village, this region, and to your love and blessings," he said.

The president paid tributes to B R Ambedkar, makers of the Constitution and freedom fighters. He also visited Milan Kendra and Veerangana Jhalkari Bai Inter College and addressed a Jan Sambodhan Samaroh.

He said the scent of soil of the village and the memories of its residents always remain etched in his heart. "For me Paraunkh is not only a village, it is my 'maatribhoomi' (motherland) from where I get inspiration to serve the country," Kovind said.

Kovind also recited a Sanskrit phrase to highlight the pride of 'janmabhoomi' (place of birth) and said, "The pride of a mother who gives birth (to a child) and the 'janmabhoomi' is greater than heaven."

"There have been a number of prime ministers from UP, but this is the first time that the state has given a president to the country. Now, the path for the people of UP to become president has also opened up," he said.

Recalling his school days, Kovind said that after getting primary education in Paraunkh, he went to Khanpur for junior high school. At that time there was no school for post-primary education.

He said he had felt then that had there been a secondary school, many children would have been able to pursue higher studies. In those days, it was almost impossible to send girls out of the village to pursue education, Kovind said, adding he was happy to note that now the village children are getting education at the Veerangana Jhalkari Bai Inter College.

The president said attempts are being made to promote fitness during Covid. "Get yourself vaccinated and inspire others as well. I will personally arrange for villagers to see the Rashtrapati Bhavan. You can come and see it," he said.

He praised UP Governor Anandiben Patel and Chief Minister Yogi Adityanath for taking effective steps to handle the pandemic in the state.

'Pucca' houses have been built in the village and it is nice to see the Rohaniya market, Kovind said, adding that he missed his classmates.

On Sunday morning, Kovind reached Paraunkh where he was welcomed by Patel and Adityanath, and he took a round with them.

Kovind, along with his wife and daughter, also visited the Pathri Devi temple where they offered prayers.

While welcoming him, the governor said the president did a lot of work for the SCs and always stayed away from disputes.

He is quite knowledgeable about parliamentary traditions and has struggled for downtrodden people all his life. He has worked for development in tribal villages, she added.

Adityanath said, "India's ancient traditions lead us onwards with self-reliance and discipline, and give us a specific identity in the world. It is said that there is no substitute for a mother and motherland, I have also come to this village for the first time."

"Our current president is a resident of Kanpur Dehat and Modi's parliamentary seat is Varanasi. It is our honour that we have made some plans for his ancestral village," Adityanath said and announce a medical college will be set up in Kanpur Dehat.

Later, the president attended another public function at Pukhrayan.

He appreciated the efforts of the Railway Ministry and the Centre for making freight corridors which the government plans to extend to Kolkata and Delhi.

The railway minister requested him to travel by a special presidential train, asking him to take stock of progress of the railway infrastructure and project of rail freight corridors.

"The people of Pukhrayan sent messages. Thanks to the people here who performed special rituals 'Anushthan' for my early recovery when I was ill," he said.

On Monday, the president will board a train at Kanpur Central railway station to reach Lucknow for his two-day visit. On June 29, he will return to New Delhi on a special flight.