Punjab Deputy Chief Minister Sukhjinder Singh Randhawa had said a probe would be carried out to ascertain whether the Pakistani journalist has links with Pakistan's ISI. 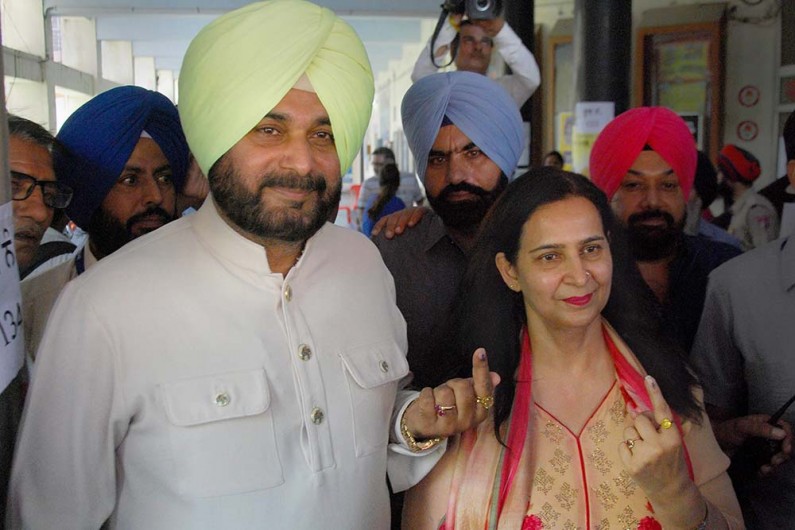 Former MLA and Punjab Congress leader Navjot Singh Sidhu's wife Navjot Kaur Sidhu attacked former chief minister Amarinder Singh on Saturday over his friendship with Pakistani journalist Aroosa Alam, alleging that not a single posting of any official took place in the state without "money or gifts" to her.

The accusation by Sidhu's wife came a day after Punjab Deputy Chief Minister Sukhjinder Singh Randhawa said a probe would be carried out to ascertain whether the Pakistani journalist, who had been visiting Singh for several years, has links with Pakistan's spy agency Inter-Services Intelligence (ISI).

Sidhu's principal strategic advisor Mohammad Mustafa also took a dig at Singh, prompting the former chief minister to hit back at him.

"Not a single posting in Punjab took place without money or gifts to Aroosa Alam," Navjot Kaur Sidhu told reporters in Amritsar.

She alleged that even in the police department, no posting took place without Alam's consent and the Pakistani journalist "ran away" with all the money.

To a question on Alam's picture with Congress president Sonia Gandhi shared by Singh's media advisor Raveen Thukral on Twitter on Friday, Navjot Kaur Sidhu said it was an old picture.

Singh hit back at Mustafa after the latter shared a picture of Alam with the former Punjab chief secretary and former director general of police.

"Still grappling to grasp the 'designs' behind twitting CP-Aroosa pic @capt_amarinder! Please do understand, grant of visa by UPA or NDA doesn't include 'licence 2 domesticate & outsource' governance apparatus to 'videshi mehman'," Mustafa said in a tweet.

Reacting to it, Thukral also shared two pictures on his Twitter handle.

"And how about you explaining this @MohdMustafaips. Isn't that your wife & daughter-in-law with the same lady? How low can you get? Mixing politics with friendship! #AroosaAlam personally cherishes these & many more such memories with your family," Thukral quoted Singh as saying.

In response, Mutsafa wrote: "My time too precious to engage proxies @rt_media_capt. The depth & dimensions of our relationships with CAS (Singh) are beyond everyone's comprehension, miles above pure commerce. Even during bitter fights we draw a line, Raveen bhai, no slf apointd surrogate wud ever understand that (sic)."